Enough is enough! NSW nurses and midwives strike for the second time in six weeks

Thousands of nurses and midwives across NSW walked off the job today for the second time in six weeks, vowing to strike again if the NSW government failed to fix the acute staffing crisis crippling the public healthcare sector.

Around 5,000 angry and frustrated public hospital and health services’ nurses and midwives participated in the 24-hour state-wide strike, except for those maintaining life-preserving services.

During the strike, the nurses and midwives rallied across 27 NSW sites to demonstrate their dismay over government inaction to address the serious issues occurring shift after shift due to the lack of nurse-to-patient-ratios and maternity staffing.

Strikers, who attended the rally outside NSW Parliament House, sent a clear message that nurses and midwives have had enough and will not tolerate working within a broken system that desperately needs ratios. 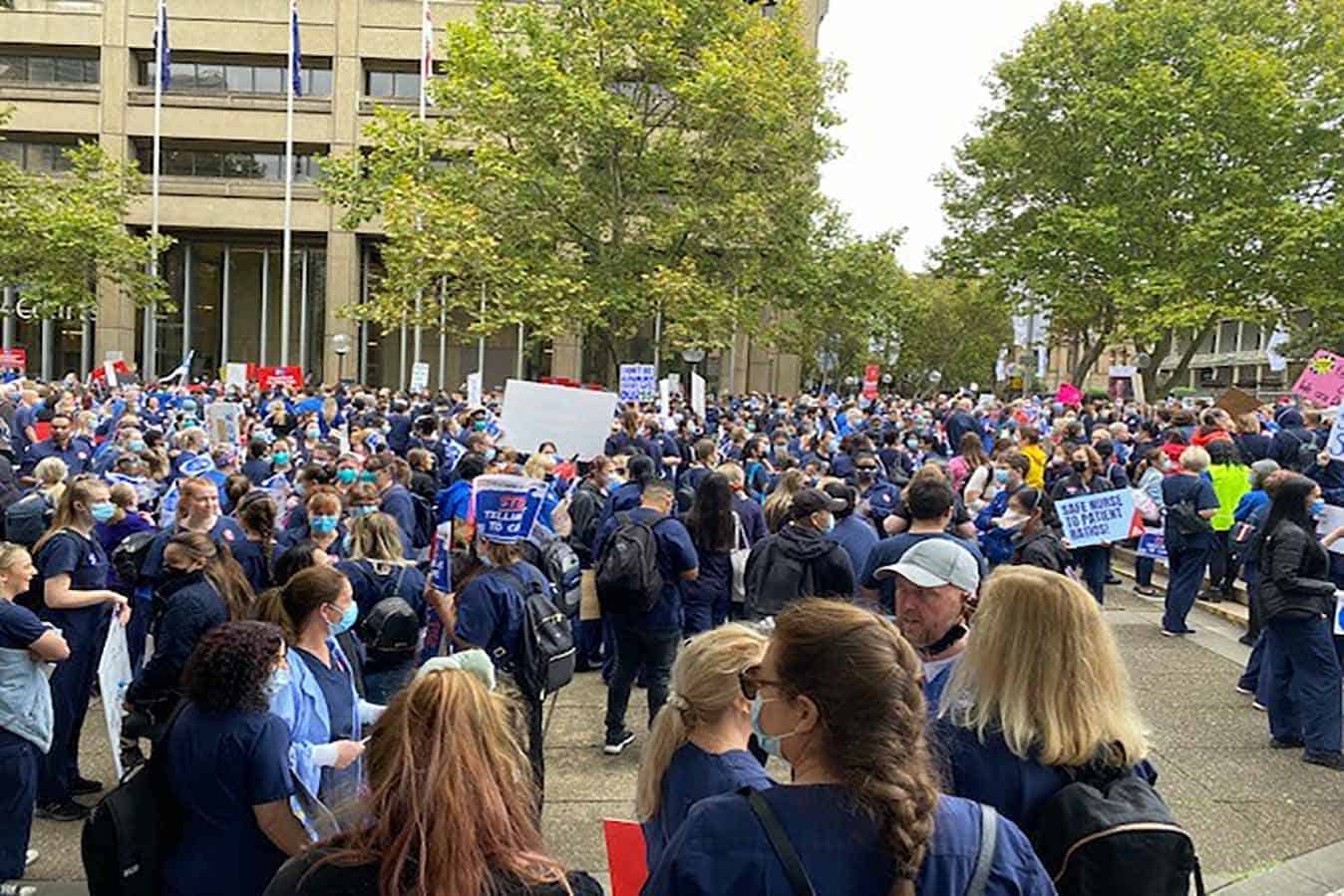 Speaking at the rally, NSWNMA (ANMF NSW Branch) General Secretary Brett Holmes said despite pleas for more support from the government, they had failed to fix the crisis.

Mr Holmes said as a result nurses and midwives were continuing to suffer from extreme fatigue and burnout from working double shifts and increased amounts of overtime because of growing gaps in staffing rosters, exacerbated by the COVID Pandemic.

Nurses and midwives from across the state also spoke out about the lack of appropriate skill mix, which had been driving stressed senior staff to leave, compounding the situation.

Nicole, a midwife from Campbelltown Hospital, said she was speaking out because she felt so strongly about the issues and the need for safe staffing for maternity.

“On a good day, midwives go to work on the maternity ward, and we will work with one midwife to six women. We may have the support of two enrolled nurses or assistants in midwifery to float over the whole unit.

“That’s on a good day. On a normal day, you will have one midwife to 12 women with two student midwives and one assistant in midwifery or an enrolled nurse to float.

“But on a bad day, you can have one midwife to 12 women with only one assistant in midwifery or an enrolled nurse.”

Nicole said that these staffing levels were unsustainable and that senior experienced midwives were leaving the health system at a rate of knots due to the unstable conditions they were working in.

To which the crowd yelled back, “mothers matter, babies now!”

Rural and remote nurse Sarah from Warren said there were no doctors at her facility  and that consults and even death certifications happened over a TV screen. Further, Sarah said there was no security on site or 24-hour police.

“Rural nursing is dangerous. We are burnt out. We are at breaking point. We are just trying to survive shift by shift,” she said.

“Our junior staff are scared to come to work. We are forced to make life and death decisions every single day. 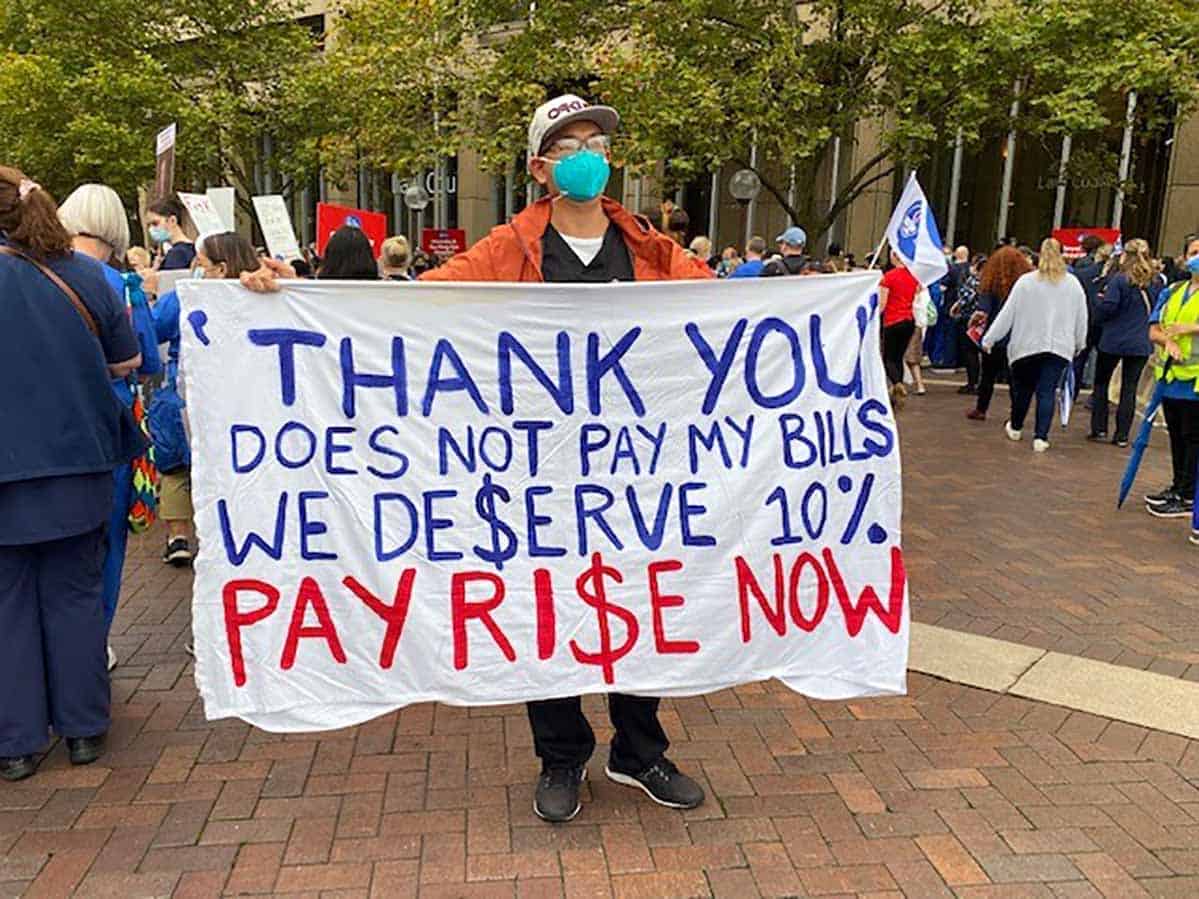 “I am sick of being the registered nurse who decides who gets their treatment and who has to wait.

“Rural nurses and midwives- mental health is our crisis, and someone needs to listen to us. We are forgotten, we are isolated, and we are unsupported – the government is failing us.”

Mr Holmes said after the last strike six weeks ago, he met with the state’s Health Minister and Premier who had failed to make any offer to fix the crisis, to which the crowd roared in disgust.

“The only commitment they gave us was that ‘they would get back to us’. The Minister said he was ‘working hard on something’,” Mr Homes said, though adding that the Minister had absolutely made clear that he did not support ratios.

Mr Holmes, who thanked nurses and midwives at the rally for their solidarity, also thanked those who desperately wanted to take part but remained at their workplaces to maintain life-preserving care.

“These politicians don’t seem to understand that death is an expensive experience for the community- not only to individuals but to the productivity of the community.

“Adverse outcomes are extremely expensive and they happen when there is not enough staff, when the staff are exhausted, and there simply aren’t enough resources to go around to meet the needs.” 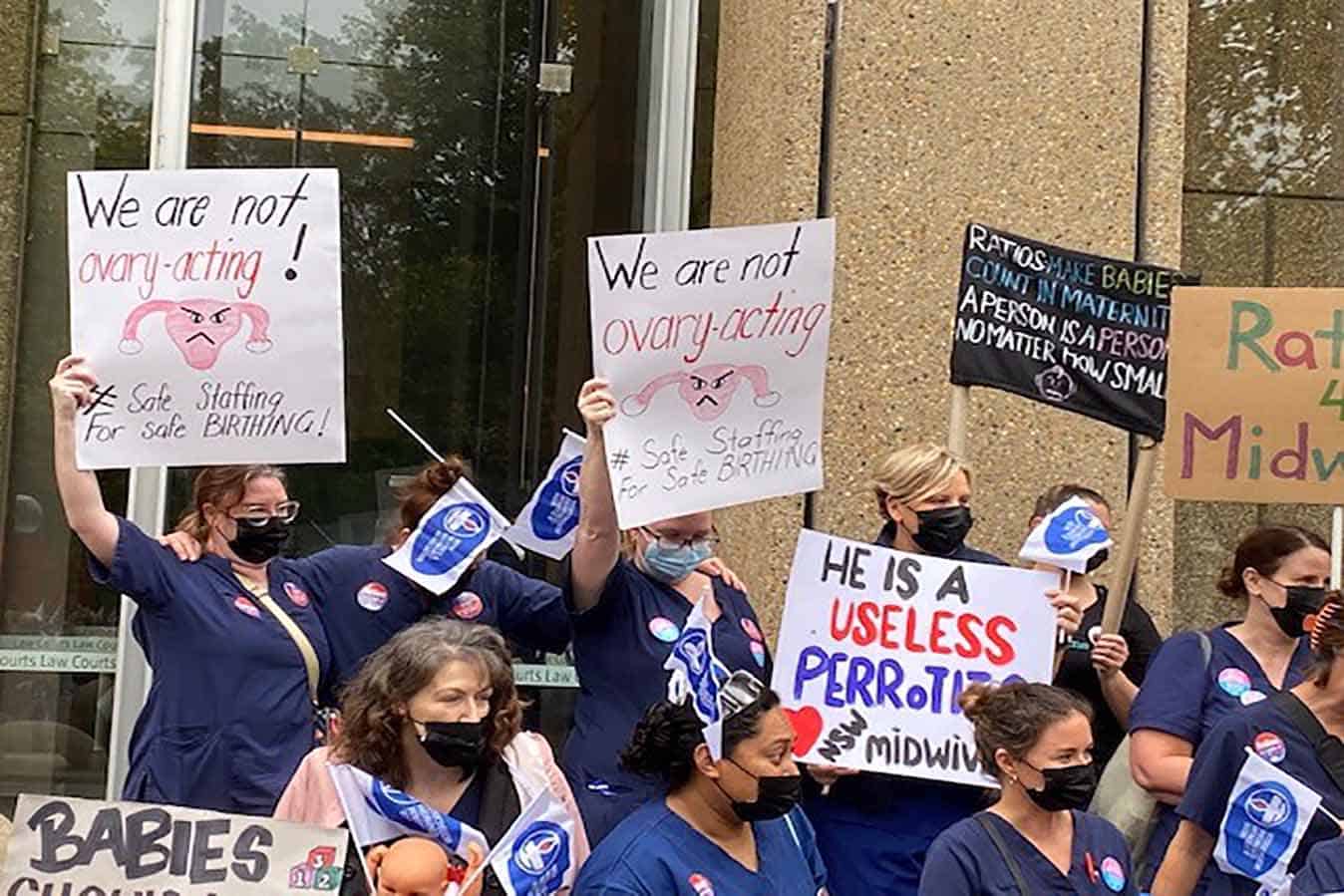 Mr Homes said what nurses and midwives are asking for is not unreasonable.

“We’re simply calling on the government to prioritise patient care and commit to a safe staffing model with a guaranteed minimum number of nurses and midwives on every shift.”

Mr Homes pointed out that Victoria, Queensland and the Northern Territory all had staff to patient ratios. South Australia’s newly elected premier has also promised ratios now that his party is in power.

“We need to keep sending the message loud and clear Ratios, Ratios, Ratios- and if they do not want to negotiate, we will be back again and again.”

At the end of the rally, nurses and midwives unanimously agreed with Mr Homes, vowing to strike again if their conditions weren’t met.