5 foods to eat on night shift and why

Clinical nutritionist and founder of The Healthy Shift Worker website and podcast, Audra Starkey, focuses her attention on improving the sleep and diets of shift workers such as nurses.

Ms Starkey spent two decades working for Qantas in the aviation industry before returning to university to study ways in which to help shift workers working round the clock maintain good health.

“Everyone who works shift work pretty much starts to gain weight because we begin to eat unhealthy foods and get stuck in that vicious fatigue cycle where we’re too tired to make healthy choices,” Ms Starkey recalls of her own personal struggles working shift work.

“So we eat a lot of those highly processed foods which leads to inflammation and nutrient depletion, so continually getting sick all the time.

“At the time I didn’t put two and two together and was just in survival mode like I think most shift workers are. We just do the best we can do. But now, knowing how the body works, particularly around our circadian rhythm, I’m just passionate about sharing it.” 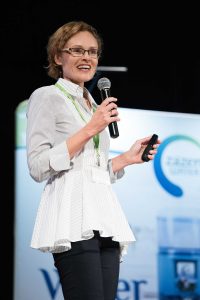 She has partnered with numerous organisations such as Queensland Police to tailor training programs to its workforce.

She points out that biologically, humans are primed to eat during the day, with gastrointestinal functions slowing down at night.

“We have to remind ourselves that we are human beings and have evolved to be awake during the day and asleep at night and our bodies are governed by a circadian rhythm, which basically means certain things are designed to happen at certain times of the day and night, such as hormone secretion and digestive enzymes, etc. It’s our biology and no matter how hard we try we cannot beat our biology.”

“They’re all a form of liquid nutrition so they’re going to place a minimal burden on the digestive system because they’re kind of already broken down,” Ms Starkey explains.

“They’re also warming and our body temperature drops at around 3-4am in the morning and most night shifters will know this because they know the chill.”

“It’s minimal burden on the digestive tract because it’s food that’s partially broken down. However, I would recommend small serves.”

“Research has shown that the pancreas doesn’t work as well during the night so it’s not able to manage that blood sugar. Low GI foods are digested and absorbed much more slowly so they’re not going to give that blood sugar rise. Examples are things like vegetable soups, nuts and seeds, yoghurt, cottage cheese and healthy fats.”

“When we’re up during the night we’re tired and not getting as much sleep and water. Dehydration is one of the biggest causes of fatigue besides a lack of sleep. Having more water-based foods like watermelon, strawberries, rock melon, cucumbers and zucchini is great.”

“Incorporating more healthy fats and protein into the diet helps them [night shift workers] feel fuller for longer so that they’re not getting those cravings. So things like avocado, cottage cheese, nuts, eggs, and vegetable based protein.”

She suggests steering clear of lollies, cakes, biscuits, donuts and pasta, otherwise blood sugar will skyrocket because the pancreas is not working at its optimum.

Ms Starkey says stimulants like caffeine and energy drinks should be avoided.

“At the end of the day, when our diet is lacking nutrients as a result of eating a lot of refined and processed foods, the body can’t make calming hormones which is going to affect the sleep of shift workers later on. This is huge because we know for night shifters that sleep afterwards is extremely important.”

To find out more visit – The Healthy Shift Worker