In 2013, leaders from nursing and healthcare unions from across the world formed a new alliance called Global Nurses United (GNU) in a bid to harness their collective power to fight austerity measures, privatisation and cuts to health services putting people and communities at risk.

The GNU partnership emerged from discussions between nursing organisations affiliated with Public Services International (PSI) who realised that the challenges they face as a profession in their home country were common and that banding together to share knowledge could be beneficial.

Looking back, NSWNMA Assistant General Secretary, Judith Kiejda, says annual meetings at PSI, a global trade union federation bringing together over 700 unions in 163 countries and territories to advocate for quality public services, largely focused on assisting poorer nations, which meant little time left to canvass issues confronting developed countries such as Australia, Canada and the US.

Given that 80% of PSI’s health members were made up of nursing organisations, the potential benefits of creating GNU seemed obvious.

“With corporations acting on a global stage, nursing is something that is pretty much done the same way around the world and it experiences much of the same issues so why wouldn’t we form some sort of forum where we discuss our issues and learn from each other?” Ms Kiejda recalls thinking.

Driven by National Nurses United (NNU), the US’s largest union and organisation of nurses that includes the California Nurses Association, GNU was officially established in 2013 when it staged its founding meeting in San Francisco.

Six years on, GNU has grown to incorporate nursing unions from 23 countries, including recent additions from India and Pakistan.

Ms Kiejda says that while GNU hasn’t made a monumental global difference its footprint and impact has been substantial and is rising. 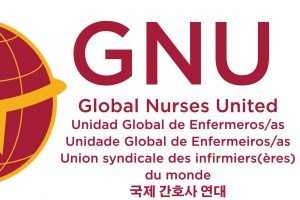 For example, successes include helping to reinstate nurses in Honduras after they were unfairly sacked.

“All we did was write letters,” Ms Kiejda explains.

“But you see no government wants to have the spotlight shone on them on a global stage and it shows we do have that power.”

Referring to GNU as a “loose coalition”, Ms Kiejda says the organisation was built on the ideals of taking action and working collectively to protect the profession, patients, communities, health and the planet.

In July last year, the NSWNMA hosted the GNU’s annual meeting, attaching it to the Association’s delegates’ conference.

The meeting included taking global leaders on a tour of several hospitals across the state.

The ANMF is affiliated with GNU on both a state and national level, with the Federal Office, QNMU, NSWNMA and ANMF (Vic Branch) all holding membership.

Ms Kiejda says Australia can learn a lot from its colleagues at National Nurses United.

“The way NNU operates, they do lots of lobbying at the state and federal levels and that in itself teaches us so much. At the state level, this state in particular (NSW), we’ve probably only in the last five or six years gotten into real lobbying and our members don’t run away from it like they used to. There’s a whole new way of getting our items on the agenda and getting that agenda brought forward.

“We’ve all looked at how the US has done their political campaigns and now we’re bringing it to our nursing arena and to be honest the grassroots campaign is the only way to go.”

Reflecting on the evolution and progress of GNU, Ms Kiejda is adamant there is still plenty to be gained from joining forces with like-minded nursing and healthcare workers unions pushing for better outcomes for all.

“I’m pretty proud that six years later it’s not just still in existence, it’s actually growing so obviously the word out there is that there’s something to be achieved from belonging to this partnership,” Ms Kiejda says.