A senior human rights lawyer that fights for the rights of refugees and asylum seekers has told ANMF delegates that there is “no more powerful collaboration” than that with health professionals in the fight against the abuse of refugee rights.

David Manne, the Executive Director and Principal Solicitor of the Victorian-based group Refugee Legal, made the comments during a virtual seminar at last week’s ANMF 15th Biennial Conference (15 October), held online in recognition of the ongoing COVID-19 pandemic.

Speaking on the subject of human rights, Mr Manne, who has more than 20 years of experience in legally assisting migrants and displaced peoples, explored the challenges of protecting refugee rights within the context of Australia’s border and immigration policy, ending with a “call to arms” for ANMF members and delegates.

“One of the most fundamental developments in recent years in combatting the cruelty and injustice inflicted on people seeking asylum in this country… [is] the intervention of health professionals,” Mr Manne explained.

“It’s been a critical intervention in this country, acting on a clear-cut duty to care, which transcends the toxic politics of the day and to speak up, which elevates this to target the core issue at stake really, which is the health and protection of people from harm.”

Broadly contextualising Australia’s current border policy, Mr Manne traced back in time to reflect on the bipartisan failures of multiple governments in looking after refugees and asylum seekers, the contrasting country’s status as a signatory to UN conventions and treaties on the rights of refugees against its own actions and failings. 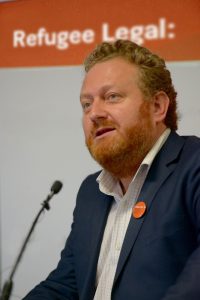 “Despite being one of the first countries in the world to sign up to the UN treaty on refugees in the aftermath of the Second World War, that promise to protect refugees, and to help them, to not harm them, has been betrayed by successive governments in the last two decades in this country,” he said.

“In our nation’s capital, our parliamentary representatives have enacted the harshest and most comprehensive anti-asylum seeker system in the Western world.”

Going beyond a mere description of government neglect, though he did allude to the crises that have played out both off-shore (on Manus Island and Nauru) and locally (in hotels and detention centres across the country), Mr Manne stated these and other measures were bound by a shared logic.

“These policies have been underpinned by the deterrence agenda, deliberate discrimination and deliberate harm. We’ve been told that they’re not people with problems, that are coming here, but people who are a problem.”

Nevertheless, despite these challenges, and citing recent examples such as the role of nurses and doctors in the evacuation of children from Nauru in 2018 and the 2019 creation of the Medevac laws, Mr Manne said it was possible for the healthcare workers to make a tangible contribution that can help shift the current status quo.

“Health professionals were instrumental in raising their voices, documenting and disclosing the abuse, providing critical medical care, and also, critical triage and documenting of medical evidence which was absolutely instrumental in getting all children [more than 200] off Nauru,” Mr Manne said.

Noting that the Medevac campaign, which also involved “nurses, care workers, midwives, doctors” in Mr Manne’s words, and the subsequent release of more than 200 people from Manus Island and Nauru, he used his call to arms to remind members that anyone can take a stand in solidarity with refugees.

“Everyone can do something to help, whether it is professionally or personally,” Mr Manne said, citing Martin Luther King’s belief that the moral universe’s arc will ultimately bend towards justice.

“Ultimately, what’s at stake here is not just the lives of people seeking safety as asylum seekers, as refugees, but it’s also about the kind of society that we want to live in, dream of, and defend.”

More information on Refugee Legal and its work can be found here.