We never know when we might need to rely on our social safety net.

Research by academic Professor Peter Whiteford in 2019 found that as many as 70% of households have had at least one person who required social support over a nine year period because of illness, unemployment or relationship breakdown.

Yet many income support payments in Australia, especially for unemployed people and single parents, actually lock recipients in poverty rather than give them the opportunity to get back on their feet.

Research released by ACOSS and UNSW in Anti-Poverty Week (17-23 October) found from June 2000 to 2021, Australia’s median household income grew by 45% in real terms and the minimum wage by 23.5%.  In contrast, incomes support for sole parents with children over eight years rose by just under 8%, and JobSeeker Payment for unemployed people rose by 12% over the same period. 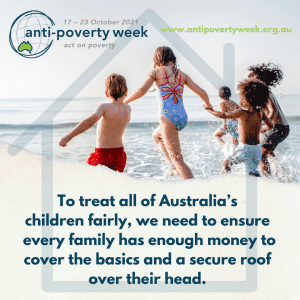 The Federal Government did the right thing in March last year when the first pandemic lockdowns were announced, providing a $550 per fortnight Coronavirus Supplement from March to September 2020. This went to those on the lowest income support payments, including the JobSeeker Payment and Parenting Payment Single.

The supplement was removed altogether in April 2021, replaced with a $50 per fortnight permanent increase, which was the major source of the 12% real increase, the first since 1994.  No further increase or supplement was forthcoming in 2021 despite ongoing disruptions and extended lockdowns.

Poverty affects far too many individuals and families with children in Australia.  Not having enough money to cover the necessities of life restricts daily life and crushes hope for the future.  In one of the wealthiest countries in the world, it is a source of shame that one in six children grow up in poverty. We’ve heard shocking stories of mothers pretending they’ve eaten dinner while cooking when in fact, there was not enough food to feed them all; of parents forced to forego important medications and unable to maintain or fix their car, all of which have the compounding effect of restricting their employment options. We’ve also heard of children telling their younger siblings to drink less milk and not even telling their parents about after school activities and excursions because they know the family cannot afford them.

The extra income provided to individuals and low-income families during 2020 really made a difference. It meant they had enough to cover the basics like healthy food and for families with children, it meant warm clothes in winter and after school activities like sport and music. Importantly it relieved stress on individuals, parents and children, which compounds hardship and poor mental health.

For some, it was the means to escape violence. We know that children can thrive and be healthy when they have what they need to develop well. The full Coronavirus Supplement halved poverty for the poorest families, headed by single parents who are typically women. According to ANU research commissioned by the Brotherhood of St Laurence and Social Ventures Australia, poverty rates for these families reduced from 39 to 17%. A survey undertaken by the National Council of Single Mothers & Their Children as part of their 550 Reasons to Smile campaign captured the impact from families: “This has helped pay the rent and feed my family. I’m a sole parent with no child support and multiple chronic illnesses. This money has given me breathing room.” Numerous other surveys showed a boost to the economy with every dollar spent.

This year Anti-Poverty Week coincided with communities across Australia feeling the pain of COVID-19, ongoing unemployment and under-employment, and an unfolding housing crisis. The combination of social security payments below the poverty line, a severe shortage of social housing, and increased renting costs is causing hardship in many urban and regional communities. According to CoreLogic’s rental index, in the year to June 2021, regional rents have grown at an average of 11.3% (and over 30% in some areas) and 5% in capital cities. At the same time, Commonwealth Rent Assistance remains inadequate at just $70/week for single people and $74/week for a single-parent family with two children. The gap between Rent Assistance and the actual cost of rents can be well over $200 per week. An increase in rent assistance is long overdue – there hasn’t been a real increase in 21 years.

This Anti-Poverty Week, we called on our governments to unlock poverty for millions of Australians by raising income support payments above the poverty line to at least $67/day, increasing rent assistance by 50% and investing in social housing. We partnered with the Everybody’s Home and Raise the Rate for Good campaigns on a petition to Treasurer Josh Frydenberg. There’s still time to take action as we’re keeping the petition running: Read Ashlie’s story & sign the Petition to the Treasurer here. As a nation, we need to ensure every individual and family has enough money to cover the basics and a secure roof over their head. It’s simply the right thing to do.

Toni Wren is the Executive Director of Anti-Poverty Week, which supports the Australian community to have an increased understanding of poverty and to take action collectively to end it. It has operated since 2002 in the week around the United Nations Day for the Eradication of Poverty on 17 October. ANMF has sponsored Anti-Poverty Week since 2008. You can read more about APW 2021 in This Anti-Poverty Week we saluted the brave voices of poverty published by Women’s Agenda 5/11/21.