Prior to undertaking advanced emergency training, nurses working in a small island nation in the Pacific called Kiribati had limited knowledge and were easily overwhelmed.

Wind the clock forward and the hospital ED’s have designated emergency nurses ready to tackle challenges head on.

Such as the time a patient arrived in cardiac arrest and nurses were able to revive him before a doctor arrived.

At the conference, Dr Tassicker put out a request for nursing input to complement a year-long medical training program he was embarking on at the Tungaru Central Emergency Department in Kiribati. 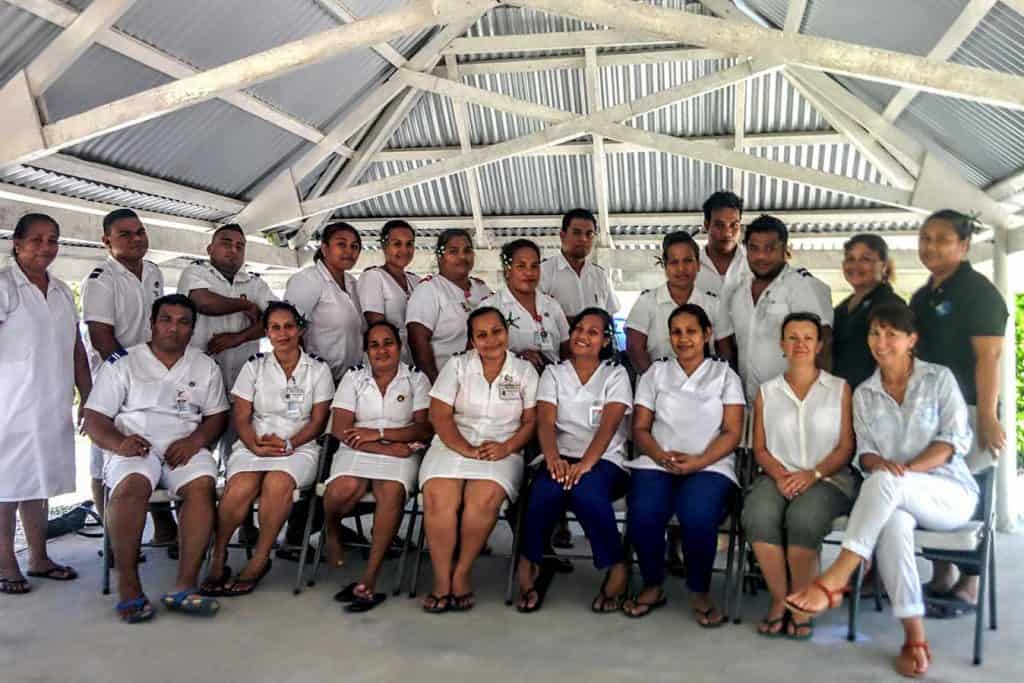 After obtaining sponsorship, Bronwen and Angela ventured to Kiribati to work on the floor alongside local nurses, carry out informal education and identify areas of need.

Bronwen recalls a chronic skill shortage among nurses, with the ED staffed by a rotation of nurses working across all areas of the hospital.

Nobody at the hospital was allowed to specialise except a midwife.

Recognising the potential for positive change, Bronwen and Angela proposed removing a core group of nurses from the rotation in order to deliver accredited training aimed at advancing emergency nursing at the hospital and developing career pathways.

With input from nurses on the ground, the pair designed a course accredited by the Australian College of Emergency Nursing and shaped by the Basic Emergency Care course endorsed by the World Health Organization.

The course would provide a bridge to facilitate transition into a diploma of Emergency Nursing in the future.

The Australasian College of Emergency Medicine (ACEM) provided funding for Bronwen and Angela to deliver the training program in 2017 over a three-week period.

It was just the second time ACEM had funded a nurse-led project.

Bronwen and Angela work in the Emergency Department at Murwillumbah District Hospital and each have a Masters in International Public Health.

They insist working in the hustle and bustle of ED demands flexibility and being able to think on your feet and adapt rapidly.

Bronwen, who teaches an International Emergency Nursing Paediatric Course for the Australian College of Emergency Nursing, says the aim of the Kiribati project was to arm nurses with the practical tools to build resilience and capacity in a challenging work environment.

“We wanted to improve their capacity and build their resilience because they’re fantastic nurses and very experienced but they didn’t have the toolkit they needed for managing that environment,” she recalls.

“In emergency in particular, the tools are the way you think of things. You need a structure to hang all your impressions on and that’s what they didn’t have – it was total chaos.”

Before the training, the hospital was staffed by a rotation of nurses with limited knowledge who were easily overwhelmed.

Participants took part in group learning, discussions, hands-on simulation and were tested both practically and theoretically.

Graduates were removed from the rotation and now work between emergency departments at Tungaru Central Hospital and the smaller Betio Hospital.

While significant improvements were made, development of a “Part Two” training course focusing on triage and disaster preparedness is likely to form the next strategic step down the track.

Reflecting on the success of the emergency training, Bronwen says it was made possible in part by genuine buy-in from the hospital administration, who shuffled schedules and transported nurses from across the island to attend the course.

After leaving Kiribati, Bronwen and Angela received correspondence from the hospital’s Director of Nursing conveying the advancements nurses had made since undertaking the training.

The sentiment was echoed by Nurse Unit Manager Teitinana Ribanti, who undertook the course himself, and joined Bronwen and Angela in October at the South Pacific Nurses Forum in the Cook Islands in 2018 to deliver a presentation illustrating the project.

“That was the first time we’d really had a chance to talk to him about what was happening and it was really encouraging,” Bronwen says.

“What we’d hoped was not just to give nurses concrete information but to create a cultural framework and that was what he described they now operated within.

“From our point of view, it was incredibly heartening to see how valuable he still feels the course is to them.”

Bronwen says the success of the course opened up the possibility of delivering it to similar Pacific environments and discussions are taking place regarding running it in Vanuatu early next year.

While she has undertaken international health projects before she counts the Emergency Nurse Training Program in Kiribati as a career highlight and is hopeful of building the relationship further.