It’s back: Welcome to season 2 of Old People’s Home for 4 Year Olds

Old People’s Home for 4 Year Olds, the heartwarming ABC documentary series that brought together a group of aged care and retirement home residents and preschoolers for daily activities to see if uniting young and old could improve the health and wellbeing of older people, is back for a second season.

In the opening season of the surprise TV hit, which went on to receive critical global acclaim, including the 2020 International Emmy Award for Non-Scripted Entertainment, Australians fell in love with 11 residents of a Sydney-based retirement village and 11 preschoolers brought together for an intergenerational social experiment.

Over seven weeks of planned activities including painting, gardening, group walks and social interaction, the documentary found that spending time with a group of four-year-olds did improve the health and happiness of the residents.

For season two, producers have flipped the experiment, this time focusing on senior Australians who live independently in their own homes and taking them out into the kids’ domain, a purpose-built pre-school, for fun, games, learning and friendship. 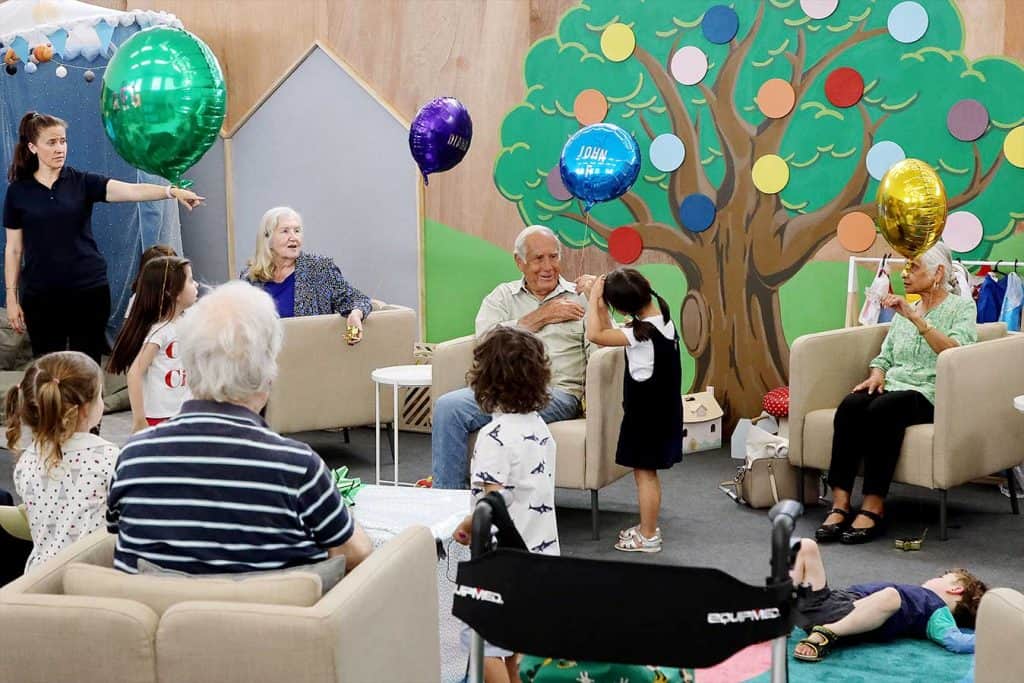 Getting to know each other on the first day.

According to data, about 1.6 million Australians over the age of 65 live on their own at home, with many experiencing loneliness and isolation.

This prompted producers to investigate early intervention for the follow-up season and, specifically, if intergenerational contact could help reduce age decline and improve the health and happiness of older Australians, thus keeping them living in their own homes for longer.

Building the confidence of the elderly to find greater connections within their local communities was another strong focus.

Like season one, a team of experts in aged care health, geriatric health and wellbeing, child development and physiotherapy oversee the social experiment.

Older adults who feature in season two include 94-year-old Reg, a retired electrical engineer who grew up in London; 84-year-old John, who keeps busy as a driver for his local Meals on Wheels; 86-year-old Maureen, who describes herself as young in mind, and looking to feel young again; and Aesh, whose husband passed away nine years ago, who keeps active by walking a couple of hours a day and practising meditation. 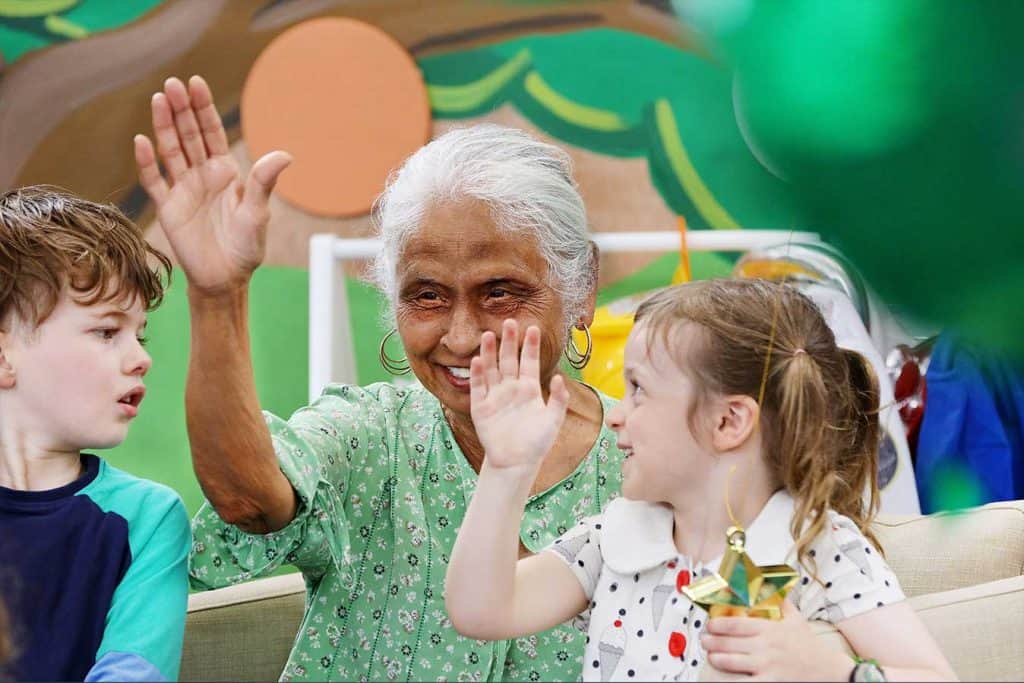 The ABC documentary series’ Aged Health Care Expert, Professor Susan Kurrle, a geriatrician and professor at the University of Sydney, tells the ANMJ she has received over 1,000 emails from Australians across the country commenting on the show since the first season aired in August 2019.

They include ordinary Australians expressing their love for the show and enquiring about how they can help; pre-schools wanting to get involved; and aged care providers looking to replicate the program throughout their own facilities.

One email, from a retired teacher, shared how she and other retired teachers were so inspired by the show that they became volunteers and now visit several aged care facilities in Melbourne.

Positively, the indelible mark left by season one sparked new intergenerational playgroups around the country and even convinced some governments to pledge support for programs and intergenerational learning centres.

Asked about the biggest effect of the show, Professor Kurrle suggests the spotlight it shone on the loneliness often experienced by people living in residential aged care was far-reaching.

Research shows that between 40-50% of aged care residents do not get any visitors.

“That was the biggest thing [impact]. Just people saying ‘I never realised it was like this, but isn’t it good you can do something, and how can we help?’”

“I’d like to think it [the series] raised awareness and made people realise that we have to do better [in aged care].”

So why a season two?

Professor Kurrle says season one proved that the experiment could work in residential aged care. Yet, 1.6 million Australians over the age of 65 live on their own at home, many who are potentially lonely and isolated and suffer health issues that contribute to physical decline.

Filmed during October and November last year in the Eastern suburbs of
Sydney, the second experiment brought together isolated older people living in their own homes and pre-schoolers.

Professor Kurrle says the effect on the older adults was magical, with their smiles returning along with a new spring in their step.

While children were the catalyst for the experiment, the development of relationships among older people emerged as an equally important benefit.

“The people, as you’ll see in the series, were alone, and you can really see the improvements,” Professor Kurrle says.

“It just hit me [through the series] how many people are socially isolated and it wasn’t just because of COVID-19. These were people who were living alone and lonely before COVID-19 hit. [What stood out the most] was the incredible benefits these people experienced when they were brought into a communal situation. And it wasn’t just linking with the children. Clearly, that was the reason for bringing them together, but what was also important was the linking with each other and I think that development of relationships was also really helpful.”

Professor Kurrle says the impact of season one has been enduring, with links forged between some aged care residents and children ongoing. For example, a number of the children had older people over around Christmas time last year

She puts the widespread appeal of the show down to its authenticity and point of difference from other TV offerings.

“I can’t explain why so many people loved watching it except that there was no sex, no violence and no bad language,” she jokes.

“It was beautifully produced and it was completely spontaneous. There was no script.

“I think it was the spontaneity and the genuineness of it when u compare it to some of the other offerings on TV like My Kitchen Rules or The Batchelor or Married At First Sight. And it appealed right across the aged spectrum.”

During the first season of Old People’s Home for 4 Year Olds, Professor Kurrle said she believed intergenerational care has the power to change aged care and improve quality of life and health outcomes.

Similarly, many hope the Royal Commission into Aged Care Quality and Safety, which handed down its final report in March, will result in meaningful change.

Professor Kurrle, who worked for the Royal Commission as a Medical Advisor, believes the Commission’s recommendations, particularly establishing a new Aged Care Act, go a long way towards improving the system.

“I hadn’t realised until I started doing the consultancy work with them that the current Aged Care Act, more than two-thirds of it is about pricing and funding, not about care. There’s nothing about care. So the whole idea of a new Aged Care Act which really does focus on the care that’s provided I think is very important.”

The recommendations regarding staffing, specifically the minimum amount of care provided, including by registered nurses, are also incredibly important, Professor Kurrle adds.

She suggest it will take a lot of community action and lobbying politicians to fix aged care.

“That’s a really good start because it’s bringing the registered nurse back into the picture again,” she says.

“We have to do a lot of work, we being the community, to make sure the Government actually does something about it.”

Season 2 of Old People’s Home for 4 Year Olds screens from Tuesday, 6 April at 8.30pm on ABC TV and ABC iview