On 12 May nurses around the globe will celebrate International Nurses Day.

This year celebrations will be extra special given the World Health Organization has designated 2020 as The Year of the Nurse and Midwife.

The theme for 2020, Nurses: A Voice to Lead – Nursing the World to Health, demonstrates how nurses are central to addressing a wide range of health challenges.

Katy Condliffe from central Victoria is a shining example of a nurse who has been a leader in Australia and abroad.

As a registered nurse and midwife of 15 years, Katy works as a practice nurse in a Gisborne medical clinic and as a midwife/registered nurse at the Kyneton District Health hospital. She is also a board member for World Youth International (WYI) to help advise on nursing and midwifery programs the organisation runs in Kenya and Nepal.

When Katy first began her nursing and midwifery career she volunteered to help build houses and assist in community work in Papua New Guinea. Following that experience she went on to volunteer in Odede, Kenya doing similar work through WYI.

During her time in Odede her team leader helped her organise outreach medical camps to provide care to local communities.

“I was the only medical person on my program, but the whole team got involved in helping with the care.”

Loving her experience, Katy went back to Odede the following year on another WYI overseas program to deliver healthcare. However, once again, she was the only nurse/midwife on the program. Nearing the end of her time in Odede, Katy met another volunteer nurse, who was commencing her volunteering experience. Recognising that the nurses could do more working together than individually, the pair came up with the idea of starting a volunteer program specifically for nurses and midwives to work in Odede.

Approaching WYI with their initiative back in 2010, the organisation agreed and Katy returned to Kenya but this time as a team leader with a group of nurses. 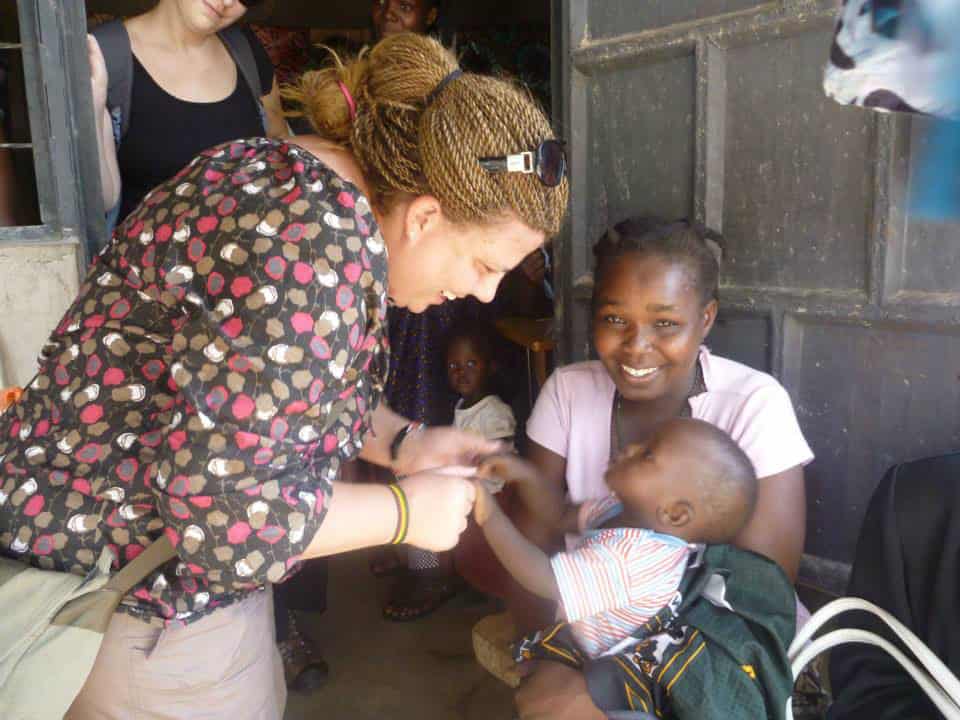 During their volunteer experience, the nurses worked in medical camps in remote areas, they were the first healthcare team to work in a newly opened Mama Ann’s Odede Community Health Centre, and instigated a number of initiatives such as an HIV group, seniors’ outreach program, women’s groups and community health workers’ education.

One of Katy’s most memorable moments from that trip was opening the maternity program at the health centre.

“Before Mama Ann’s Odede Community Health Centre opened, women either had to travel significant distances in labour, often removed from their family or when unable to do so would birth at home with no medical support. We started many initiatives to promote women coming to the clinic to receive care.”

One of the first births Katy attended was with a mother who had been pregnant twice before but had lost both babies late in pregnancy and at birth.

“I was nervous looking after her with significantly less medical back up than I was used to in Australia. She laboured well and with another volunteer we were privileged enough to be at the birth of her live and very healthy looking baby girl. The smile, disbelief and complete amazement at her birthing a well child was incredible.”

On the back of what Katy and the other volunteers achieved in Odede, WYI has continued to run healthcare programs, staffed by Australian nurses, midwives and other healthcare workers.

Over the years the program, aptly named Nurses in Action, has grown from strength to strength. The organisation, which has run more than 30 programs in Odede and more recently programs in Nepal, has significantly supported healthcare services in these communities.

Katy said the experience of volunteering, including her time as a team leader, helped her recognise what nurses and midwives are capable of and why they are leaders in their own right.

“World Youth International was fundamental in finding my nursing leadership and acknowledging it, [in Kenya and at home],” Katy says.

She says the experiences volunteering gave her included confidence in her own abilities and to take up leadership roles working back in Australia.

Reflecting on leadership, Katy believes all nurses and midwives in their everyday practice are leaders, especially through patient advocacy.

“Nurses and midwives are at the forefront of healthcare and so can see a wider picture and lead from that aspect.”

Yet she says often the professions are not recognised for what they do or that some nurses and midwives do not see themselves as leaders even though they lead every day.

“I think sometimes it’s just a realisation that what you’ve always been doing is leadership.” Now Katy is taking her leadership skills to the next level after being appointed a director of WYI’s Board earlier this year.

Katy accepted the position not only because she helped start the Nurses in Action program from the grassroots but also because WYI aligns with her values.

Katy says as a board member her goal is to help continue developing the Nurses in Action program to flourish and grow.

“I want to bring my skills and knowledge to the management team,” she says.

Katy says more nurses and midwives should be appointed to boards and leadership panels.

“I think more nurses and midwives are especially needed on community health and hospital boards because we see the wider picture, coming from that place of patient and community advocacy.”

Katy believes dedicating this year to the nurse and midwife, will not only highlight what the professions do but help nurses and midwives realise what is possible.

“The year of the nurse and midwife is helping us realise our potential and letting the next generation of nurses know that nursing can be more than initial healthcare, it can be much broader than that as well.”