The determination of an Australian nurse and committed member of the ANMF to support marginalised workers across the globe helped set the foundations of Union Aid Abroad–APHEDA which has since provided support and justice to many worldwide.

In 1983 when humanitarian nurse Helen McCue was working in refugee camps and providing nurse education services for the World Health Organization (WHO) in Palestine, she observed the solidarity and aid that Norwegian People’s Aid, a trade union organisation from Norway provided for people on the ground.

“She was particularly interested in the lives of the nurses in those camps, how affected and traumatised they were, and really felt strongly that the workers needed to be supported as much as the people that they were supporting,” Ms Lee said.

On her return, Helen contacted then ACTU President Cliff Dolan and set out her proposal to establish a global justice organisation. With his assistance and the broader Australian union movement’s backing, Union Aid Abroad-APHEDA was born, setting in stone a mission that now encompasses the support of “strong unions and social movements, sustainable development programs, global solidarity and support in times of crisis.” 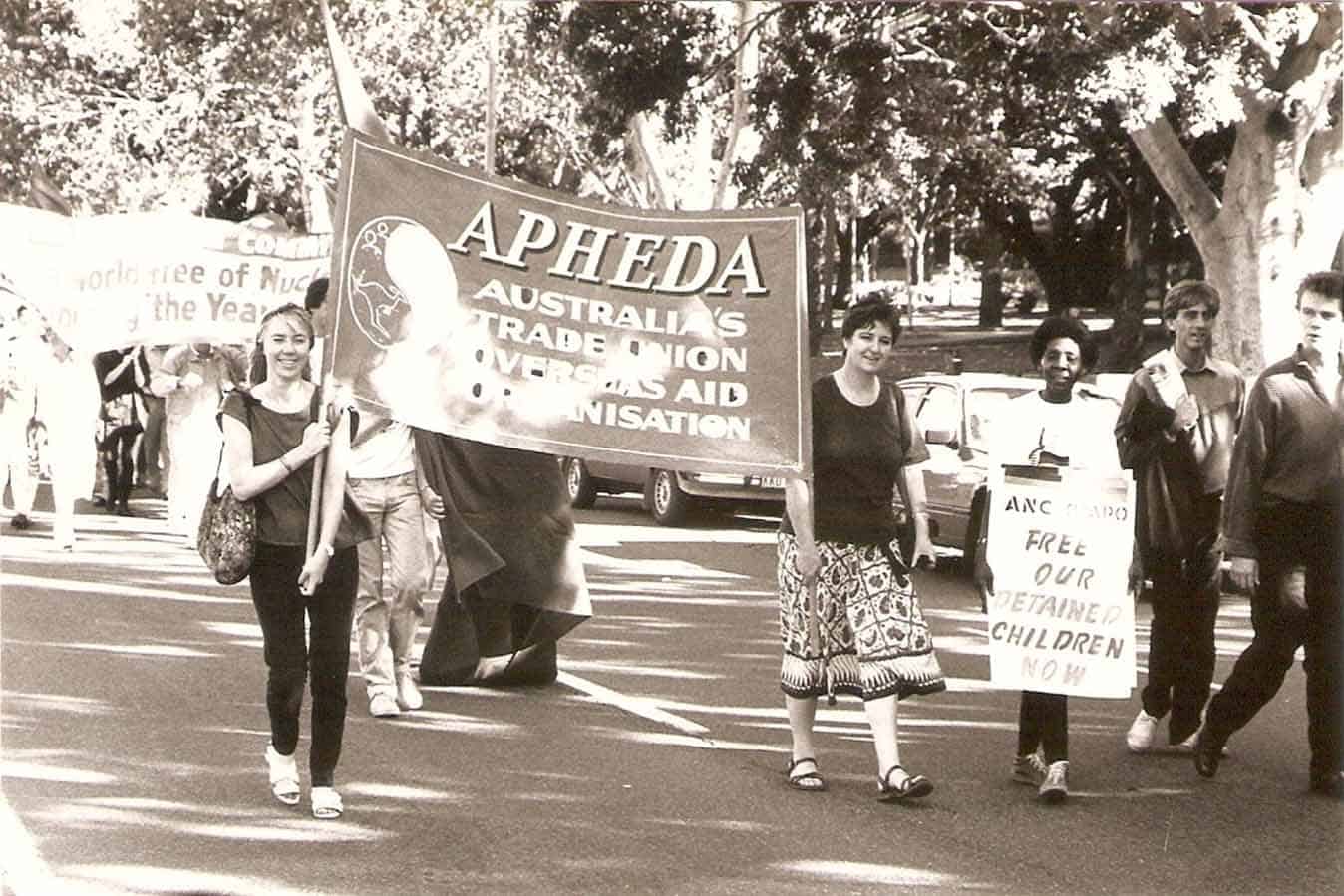 Today, APHEDA works in thirteen locations in Southeast Asia, the Pacific, the Middle East, and Southern Africa in partnership with 39 local unions and community organisations through 30 projects and campaigns.

APHEDA’s work has included actively supporting causes such as the Anti-Apartheid movement and the liberation of Timor Leste while also helping those communities in developing countries develop infrastructures that support strong worker’s movements.

While a key part of APHEDA’s work is assisting with union organising, Ms Lee said the organisation had developed a multi-pronged approach in aiding communities over time. This includes defending and developing women’s rights, climate justice and “the rights of migrant workers and refugees”.

Currently, APHEDA is building a movement in Australia to join unionists and campaigners across South East Asia to support their struggle to ban Asbestos and eliminate asbestos-related diseases.

While Asbestos is banned in Australia, Ms Lee said many Asia-Pacific nations continued to use the dangerous material as part of construction activities, creating significant risks for workers on the ground and their families.

“As the markets have shrunk [in Europe and Australia], the Asbestos industry has found new markets, and those markets have been growing until recently,” she says, adding that India, Indonesia and Vietnam are among the countries that have experienced increased demand.

“We’re up against an industry lobby that’s determined to hold on to the very last bit of its market.

APHEDA’s campaign, Asbestos. not here. not anywhere, which is its flagship concern for the next four years, aims to ban Asbestos in Vietnam, Indonesia, Laos and Cambodia, while also aiding and abetting the global movement for a total ban on Asbestos.

It’s a big campaign, and with several other APHEDA projects on the go, Ms Lee says there are plenty of ways for union members to get on board, whether through member, fundraising, education, lobbying or other contributions.

“We want to build a stronger sense of international solidarity,” Ms Lee explained.

“We want to develop new ways to do that, and we want to ask all workers and as many unions as possible to be part of that with us.”

For more information on APHEDA’s work and the ways you can contribute as a member of the trade union movement, visit the organisation’s website apheda.org.au