In January 2020, the Australian Industry Group (Ai Group), representing several private hospital associations, made an application to reduce the rate of pay for casual nurses, midwives and nursing assistants employed under the Nurses Award.

Ai Group argued the Award was ambiguous and/or uncertain concerning the rate payable to a casual employee for work performed during overtime, weekends and public holidays.

Their preferred interpretation of the Award would have meant casual employees working during these times would be paid less.

In the alternative, Ai Group argued that amending the Award was necessary to meet the Modern Awards objectives.

While most ANMF members work under a collective agreement, some still rely on the Award to determine their terms and conditions of employment, including their rates of pay.

This is particularly the case for ANMF members working in the private sector for employers such as medical practices, day hospitals, specialists’ clinics etc.

For other members, the Award is important because any collective agreement is assessed against the conditions within it to ensure it passes the Better Off Overall Test (BOOT).

The ANMF Industrial Team vigorously defended the application before a Full Bench of the Fair Work Commission. We were able to demonstrate that the case law on the matter was in our favour. The QNMU Branch of the ANMF had a Full Bench decide a similar issue in their favour concerning the rates of pay for employees covered by an enterprise agreement for Domain Aged Care1 less than two years ago.

As can be seen from the below table, if Ai Group had been successful in their claim, it would have meant significant decreases in pay for casuals working overtime, weekends and public holidays. While this case was largely fought on technicalities and legal argument, there would have been ‘real world’ consequences for some casual ANMF members with their rates of pay reducing when working unsocial hours. 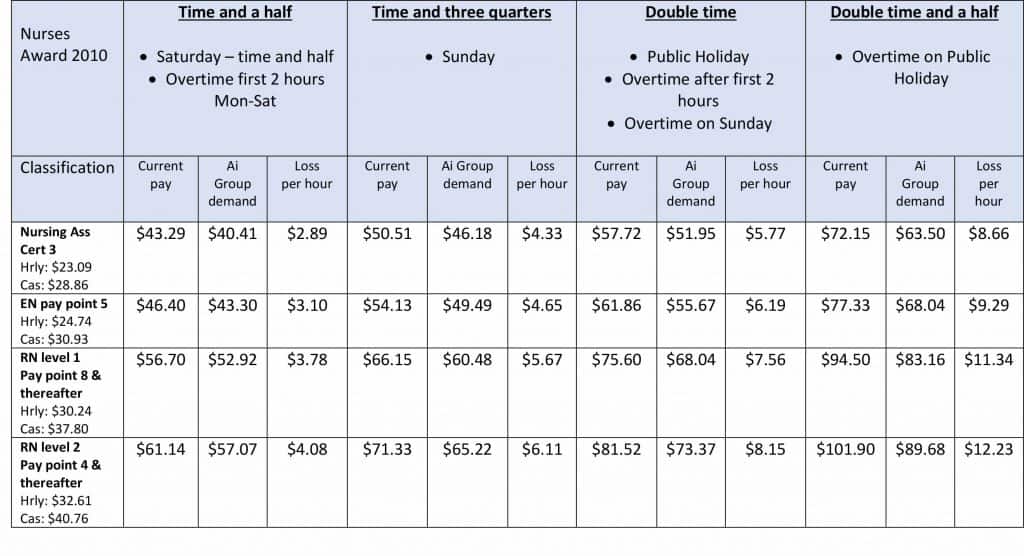 If the Ai Group application were successful, it would have meant that casuals employed under the Award would have had the following percentage decreases in pay:

In January 2021, the FWC handed down its decision in the matter, rejecting the Ai Group’s case in its entirety.2 With respect to the argument that the Award was ambiguous and/or uncertain the FWC rejected that there was any ambiguity or uncertainty. With respect to the Modern Awards objectives, the FWC noted that the Ai Group’s submissions were “largely unsupported by evidence” and this lack of evidence was “fatal to Ai Group’s case”.3 Hopefully, this decision will dissuade other employer groups and employers from having another attempt to undermine Award conditions, at least for the foreseeable future.