Why I articulated from an EN to RN

It seemed only natural that Lyndel Echter would become a nurse.

Her mother is a nurse. Her older sister and two aunties are nurses. And her younger sister is on the cusp of graduating with a Bachelor of Nursing later this year.

“We lovingly call it the curse of the nurse,” she jokes.

Except Lyndel’s pathway into the profession didn’t pan out as seamlessly as one might expect.

In 2012, aged 18, she commenced a Bachelor of Nursing degree at Deakin University but spent much of her time unsure if she’d made the right call.

After a year studying nursing Lyndel felt lost, so she sidestepped into criminology, but quickly realised she didn’t want to be a police officer or work in research either.

Before long she was working at a supermarket.

“I decided to take a break until I found my path again. I worked in a supermarket full-time and learnt lots around customer service, ordering and dealing with representatives, stock, computer systems and supervised, opened and closed the store.”

Lyndel credits the job with allowing her to find her feet and engage with people from all walks of life.

It gave her the confidence to want to give nursing another go.

She enrolled in an Endorsed Enrolled Nurse (EEN) course at Gordon TAFE in Geelong in 2015 and found the transition back into study uncomplicated, with anatomy and physiology her favourite classes. 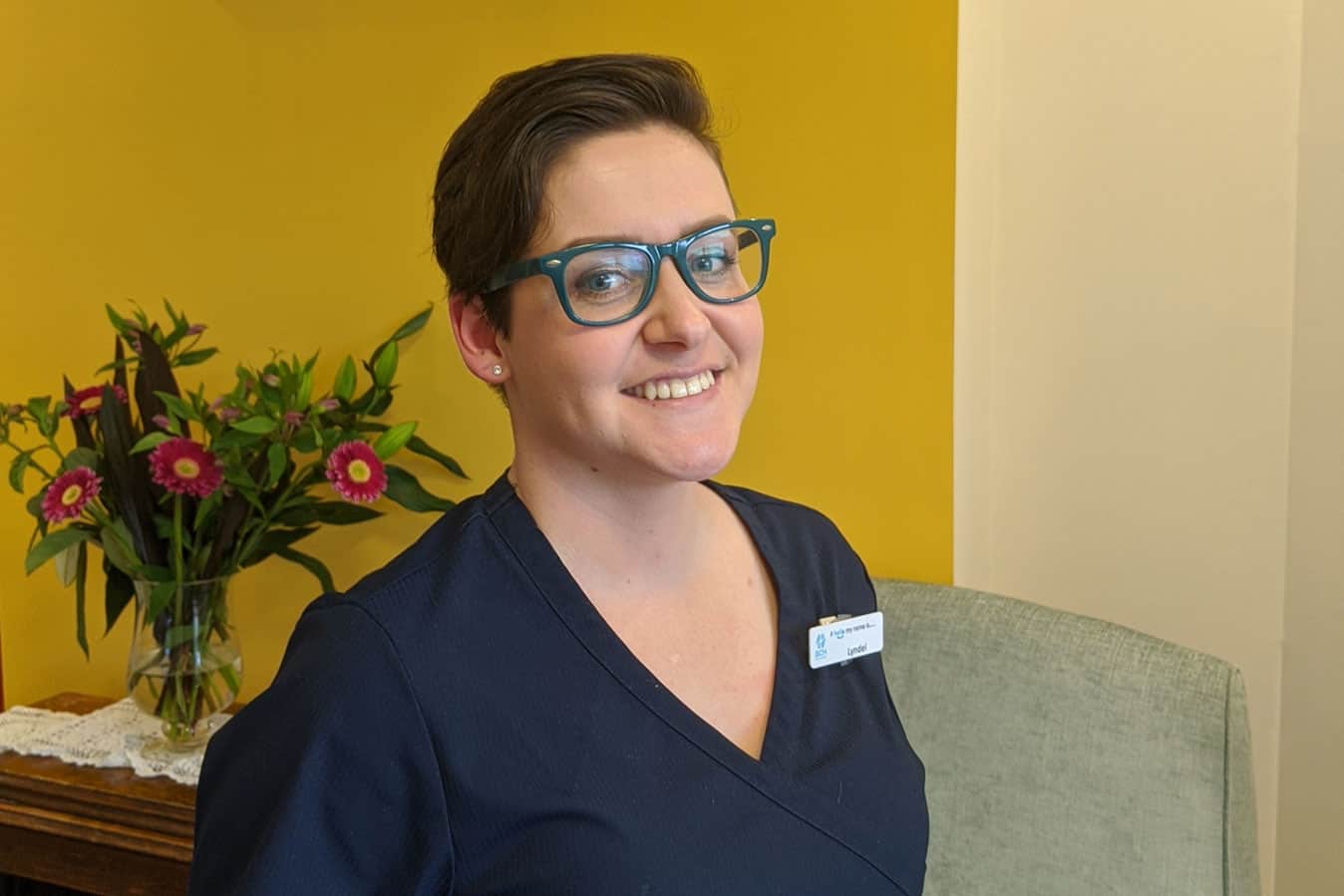 During the last 10 months of the course, Lyndel and her partner (now husband) moved to the Mornington Peninsula and she began working as an NDIS support worker.

A mental health placement during the EEN course sparked an interest in providing support to the homeless and she soon started volunteering with a Melbourne-based service, with a view to the field becoming a career pathway.

After graduating, Lyndel worked for Mentis Assist as a mental health support worker and progressed to the position of Mental Health Practitioner, supporting people with recovery oriented goals.

Lyndel enjoyed the job but still possessed a burning thirst for knowledge, which prompted her to apply for a then 18-month Bachelor of Nursing (Enrolled Nurse) degree at La Trobe University to qualify as a registered nurse.

After a year working in mental health, she resigned from the role to focus on full-time study.

“Tutorials were long, and multiple on a day. Lectures were non-existent. Simulation labs and practical labs were occasionally daunting but helpful. The style of learning suited me well,” Lyndel recalls.

“I completed a few extracurricular activities with the School of Nursing and found them always supportive.”

Ultimately, Lyndel says her decision to articulate from an EEN to an RN was driven by wanting to increase her knowledge and made possible by the fact she was in a financial position to do so.

“I think those things are vital and then also having RNs in my life,” she says.

“I had my Mum, my sister and some family members and I met a few really inspirational RNs, so I sort of wanted to expand my knowledge-base and follow in their footsteps.”

The La Trobe course, one of many across the country, allows ENs to upgrade their qualifications and involves clinical placements, study in acute nursing and nursing research, and specialised subjects such as mental health and recognising and responding to the deteriorating patient.

The degree is designed to offer a clear pathway to positions working as an RN in settings including hospitals, primary care and aged care.

“I felt there was more career growth and I wanted greater responsibility. Becoming a registered nurse is so versatile and there’s so many different areas you can work in. Being an EN is great but there’s just a level of acuity you can’t work in legally as an EN and I really wanted to expand my abilities in that aspect.”

Lyndel describes the course as challenging, largely due to the travel required with clinical placements and spending time away from family.

Her favourite placement was at Alfred Health’s Stroke Unit.

After graduating, Lyndel weighed up her next move and eventually decided to apply for a rural graduate position with Bass Coast Health.

She was accepted, nominating aged care and district nursing as her preferred rotations.

“I think the aged population are some of the wisest, and good residential aged care is very important,” Lyndel says.

She began her graduate year in January at Kirrak House in Wonthaggi, a residential aged care facility with capacity for 30 residents adjacent to the Wonthaggi Hospital (Bass Coast Health), as the global COVID-19 pandemic was taking hold across the globe.

Extra staff have been rostered on, and video calls and iPads are being used to enable residents to continue contact with their loved ones.

“Everyone’s come together to realise that it’s a hard time for all our residents. Staff are going the extra mile to help residents feel safe, secure and connected.”

“The biggest challenge has been keeping spirits up because a lot of residents like to watch TV and all the programs get interrupted early on by the updates on coronavirus news and the news, it’s sort of scared a lot of people, so being there for emotional support for all our residents has been important.”

Reflecting on articulating from an EN to an RN, Lyndel believes financial constraint remains the biggest barrier many ENs face in climbing the ladder.

“In my EN course, there were many women with small families and if they had to stop working or go on these 10-week placements required in a Bachelor of Nursing then they wouldn’t have been able to afford to do it. A few of them have started their Bachelor of Nursing now rather than a bit earlier because of the financial impact on their families.”

The 27-year-old suggests becoming an RN has increased her scope of practice.

“I think there’s lots I still have to learn and I still learn lots from ENs that have been in the field longer than me. I still learn from ENs as well as RNs but I feel like my clinical knowledge has improved [since becoming an RN] and recognising a deteriorating patient and my clinical assessment skills have really improved and developed. I think there’s lots of growth still to occur and I’ll probably go back and do more study.”

“We’re all helping the same patient and we’re all on the same team,” she says.

“If you’re an RN, listen to what your ENs are saying because you’re putting a lot of trust in them in regards to your own registration. Understand that they do have very good knowledge and know that everyone has something to say and their opinion is valid and they [ENs] probably pick up on a lot more things too.”

ENs aren’t given as much credit as they deserve, Lyndel adds.

“I think in a lot of hospitals and facilities, the EN is looked down upon and it’s not right. ENs are important. They make the world go round and they’re fantastic. The differences between ENs and RNs are mostly in looking after the acuity of the patient, so an EN can’t look after a deteriorating patient, which an RN would, as well as a few extra legal responsibilities.

“I think [there’s a stigma] because there’s a lot of hospitals that don’t take ENs onto acute wards, which I find a bit sad because ENs are capable if you give them the right mentorship that we all need entering the industry. They’re capable and I think the idea that the EN can’t look after the deteriorating patient is the main barrier to them working in acute wards in some settings. But all the RN or the nurse in charge has to do is redeploy them to a different set of patients while they take over the deteriorating patients. It’s something that hopefully will improve in the future because ENs are vital.”

Lyndel admits beginning her graduate year amid COVID-19 has been testing, with some of her educators redeployed to other settings and debriefs now taking place over zoom.

Looking ahead, Lyndel is hoping to embark on a Transition Year in 2021 with Bass Coast Health, akin to a second graduate year, where she will get the opportunity to try three different areas within the hospital.

Lyndel’s pathway into nursing encountered hurdles but she says she is glad she returned to the profession.

“Early on and being 18 when I left school, you see everyone find their feet very fast but not everyone finds their career straight away,” she says.

“I knew most of my family were nurses and I didn’t want to just do nursing for the sake of following my family, even though I saw they were wonderful nurses and I respected them so much. Just to go on my own journey and to see what works for me was important before I came back to nursing and I’m very glad I took the pathway I did.”

Lyndel says she hopes her experience inspires some ENs to articulate to an RN.

She believes ENs have a wealth of knowledge that will help them through university with the right support systems.

“If you don’t have the support, reach out and find support. If it’s something with your confidence and things like that, there’s places like Nurse & Midwife Support where you can get support. Finding your support network helps you get through your Bachelor.”