Aged care nurses and workers converged on Canberra this morning to express their anger over the federal government’s failure to protect staff and residents during the current COVID-19 surge.

Workers demanded swift action to fix the longstanding crisis in aged care so that further deaths can be prevented.

Organised by the ANMF and its state and territory branches, the rally levelled blame at the Morrison Government’s lack of planning and its sidestepping of responsibility, which protestors argued has led to the country’s aged care system teetering on “the brink of collapse”.

The COVID-19 Omicron wave has devastated the sector over the past month, so far killing almost 600 residents and infecting more than 30,000 staff. After resisting calls for urgent assistance, the government this week announced it would finally deploy up to 1,700 defence force personnel into nursing homes to help stabilise outbreaks and patch up staff shortages.

Unions highlight that, under Scott Morrison’s watch, the sector has battled a range of issues, including chronic understaffing, lack of free and accessible Rapid Antigen Tests (RATs), inadequate PPE, a botched vaccine rollout and failure to deliver booster shots, and poor pay. Glaringly, the government has also failed to implement any of the Aged Care Royal Commission’s 148 recommendations, advocates say. 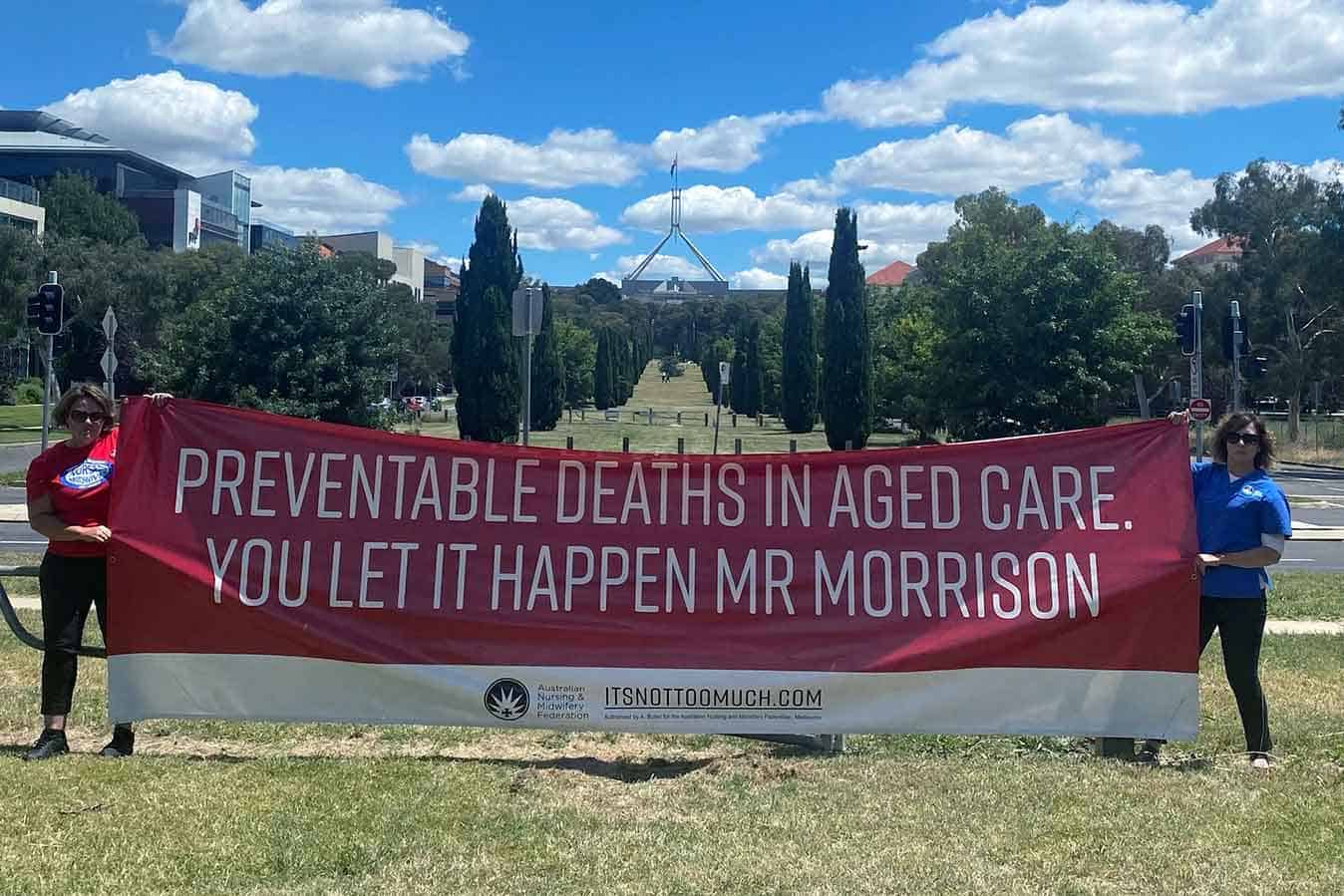 “Every day that Mr Morrison fails to act on safe, minimum staffing ratios, fails to deliver a decent, permanent pay rise for underpaid workers and fails to show our aged care workers and residents dignity and respect, is another day that elderly Australians in nursing homes continue to suffer,” Ms Butler said.

Speaking at this morning’s rally, Ms Butler said that despite numerous reports and inquiries, including the government’s own Aged Care Royal Commission, which have identified core issues plaguing the aged care sector, meaningful action has been left wanting.

Too little to late is a common trend when it comes to aged care, Ms Butler suggested, citing yesterday’s announcement of ADF support for aged care as an example, some four weeks after unions pleaded for help, with 500 Australians dying amid the delay.

“We know that aged care has been in crisis, a building, growing, deepening crisis for years,” Ms Butler told protestors.

“It has hit a point now where we’re seeing the system on the verge of collapse.

“Our aged care nurses and workers are holding the system together as best they can but they’ve got virtually nothing [in the tank] left. This is a crisis that should have never ever been allowed to happen and we are saying directly to Mr Morrison, you let this happen and it should never have been allowed.”

Meanwhile, several aged care nurses and workers revealed what it’s been like working in the embattled sector during the pandemic. 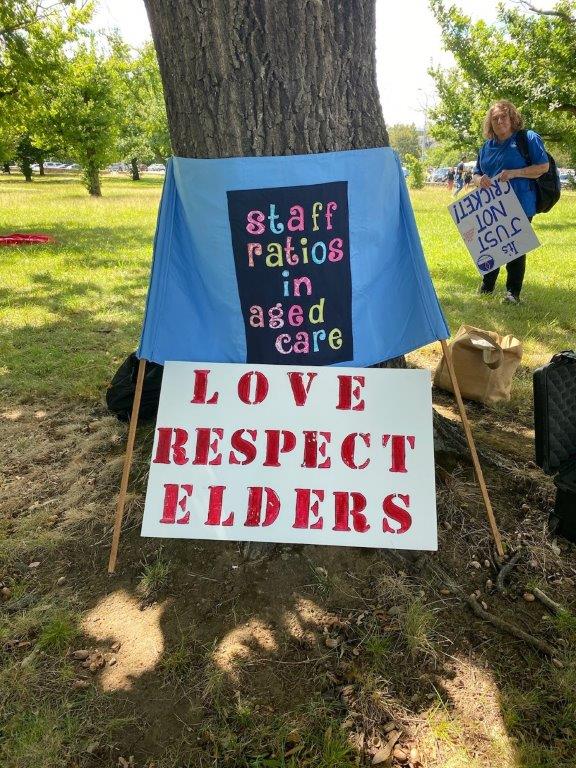 Aged care nurse Susan Walton, who has worked at the same residential aged care facility for the past 18 years, urged all Australians to speak up for the vulnerable elderly.

“We have 120 residents where I work,” Susan explained.

“I’d like to tell Mr Morrison everything is not alright. We were treading water before [the pandemic] but we’re actually drowning now. We can’t go any worse than what we are, we are in crisis, we’ve been in crisis a long time.”

Susan, who works night-shifts and cares for 40 people, said it had become almost impossible to provide safe and proper care, with most workers having to make heartbreaking decisions on a daily basis about which residents in need to respond to first.

“You go to work now with COVID. It’s been in lots of our facilities; a third of our workforce is down, our residents are getting substandard care. You can’t get to them; you cannot physically look after 40 people by yourself.”

Aged care assistant in nursing Linda Hardman said many other aged care workers wanted to attend today’s rally but, as the backbone of the workforce, were needed on the floor to care for their residents.

She said elderly Australians who had worked hard to build the country in their earlier years deserved quality care towards the end.

“That’s what we want to able to provide, quality care,” she said.

“Not running [around] all the time trying to answer buzzers.

“It’s disgusting and I hate the fact that we have to rush all the time, make excuses… and my colleagues are getting burnt out. They really and truly are getting burnt out and they feel it, it’s a heart [care] thing for us, these are not just residents, they’re our people, people that we really truly care about.”

After decades working in the system, Susan said it broke her heart to witness what was unfolding in the aged care system.

“I’ve been working in the aged care sector for 21 years and 21 years we’ve been fighting bloody hard. But we won’t go down without a fight. I try to inspire other staff to keep going but it’s really hard. I just say we need to keep on going and keep our promise to our residents, because we have promised them that we will keep fighting and that there will be a better system because that’s what they deserve.”

The ACTU joined aged care nurses and workers at the protest, condemning the government for abandoning their responsibility for aged care and allowing the crisis to worsen.

President Michele O’Neil said she was shocked that instead of listening to the pleas of aged care workers, Mr Morrison has seemed more intent on pulling “cheap political stunts”, such as attending a Victorian hair salon last week to wash a woman’s hair.

“I know from talking to the workers here today that there isn’t time to be able to wash and care for elderly vulnerable Australians who are sitting in their own faeces and urine,” Ms O’Neil said.

“Yet our Prime Minister thinks it’s okay to be able to do cheap political stunts instead of responding to the reasonable demands of [aged care] workers that we’ve relied on.” 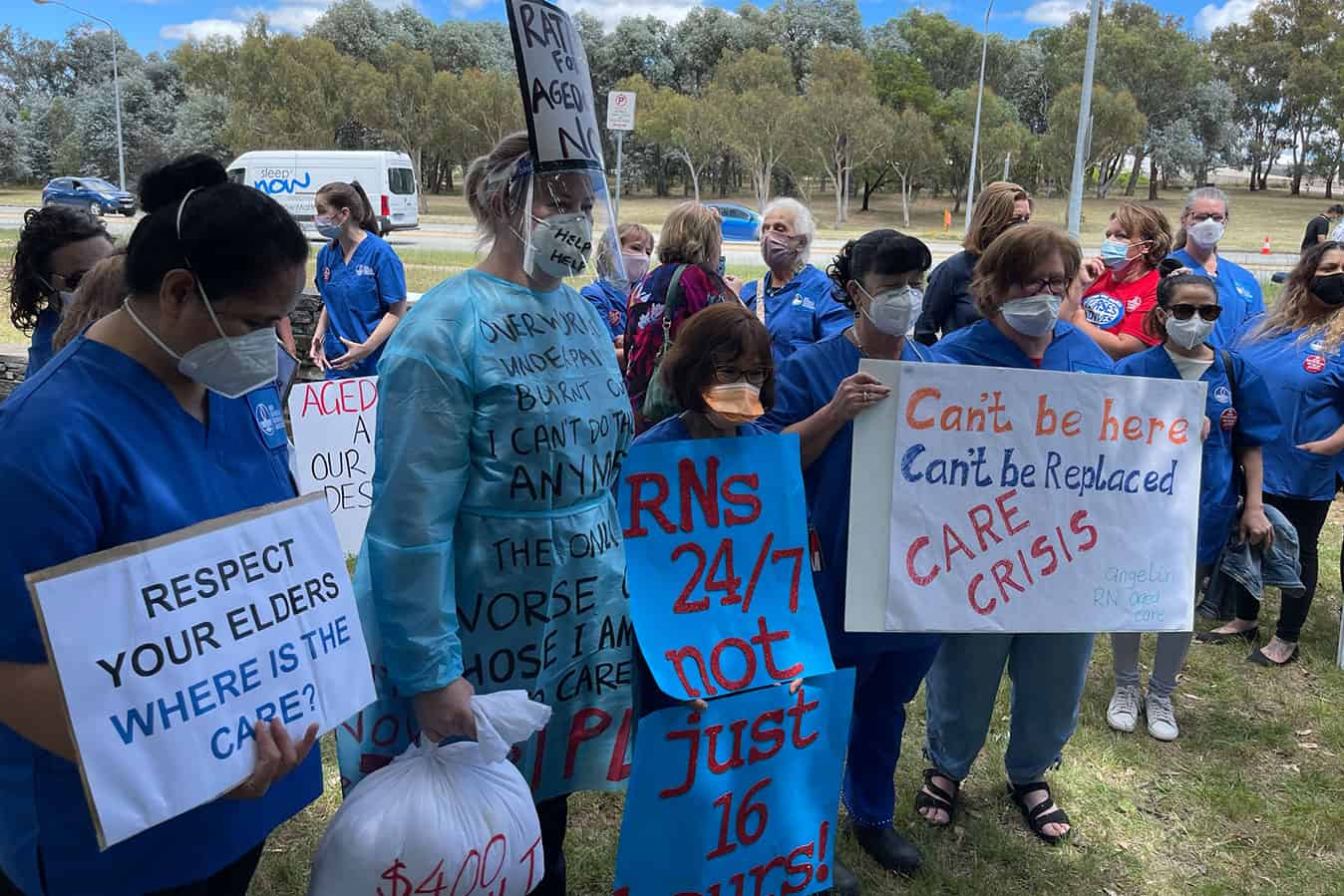 Ms O’Neil said aged care workers had not had the luxury of working from home during the pandemic. They have turned up, shift after shift, to care for elderly Australians, and instead of being valued with proper pay and safe staffing, have largely been ignored.

“It’s insulting to these workers and it’s insulting to these aged care residents that they’re caring for. So I’m going to say to Scott Morrison that this is your problem, this is a crisis that you have made. This is something that if you’d listened to these workers and the organisations that represent the whole of the sector, you would have acted on before you had the number of people dying that you have today in Australia.”

Many aged care residents are going without food and water, and, due to understaffing, nurses and workers are being forced to decide who gets care first, she said.

“Nurses should not be asked to make those choices,” Ms O’Neil declared.

“The sort of things you’ve described here [today], it is inhumane to send people into work every day to do a job that they cannot possibly do. Yet that is what Scott Morrison is asking of you every single day you go to work at the moment and it’s not fair and you should not have to put up with it.” 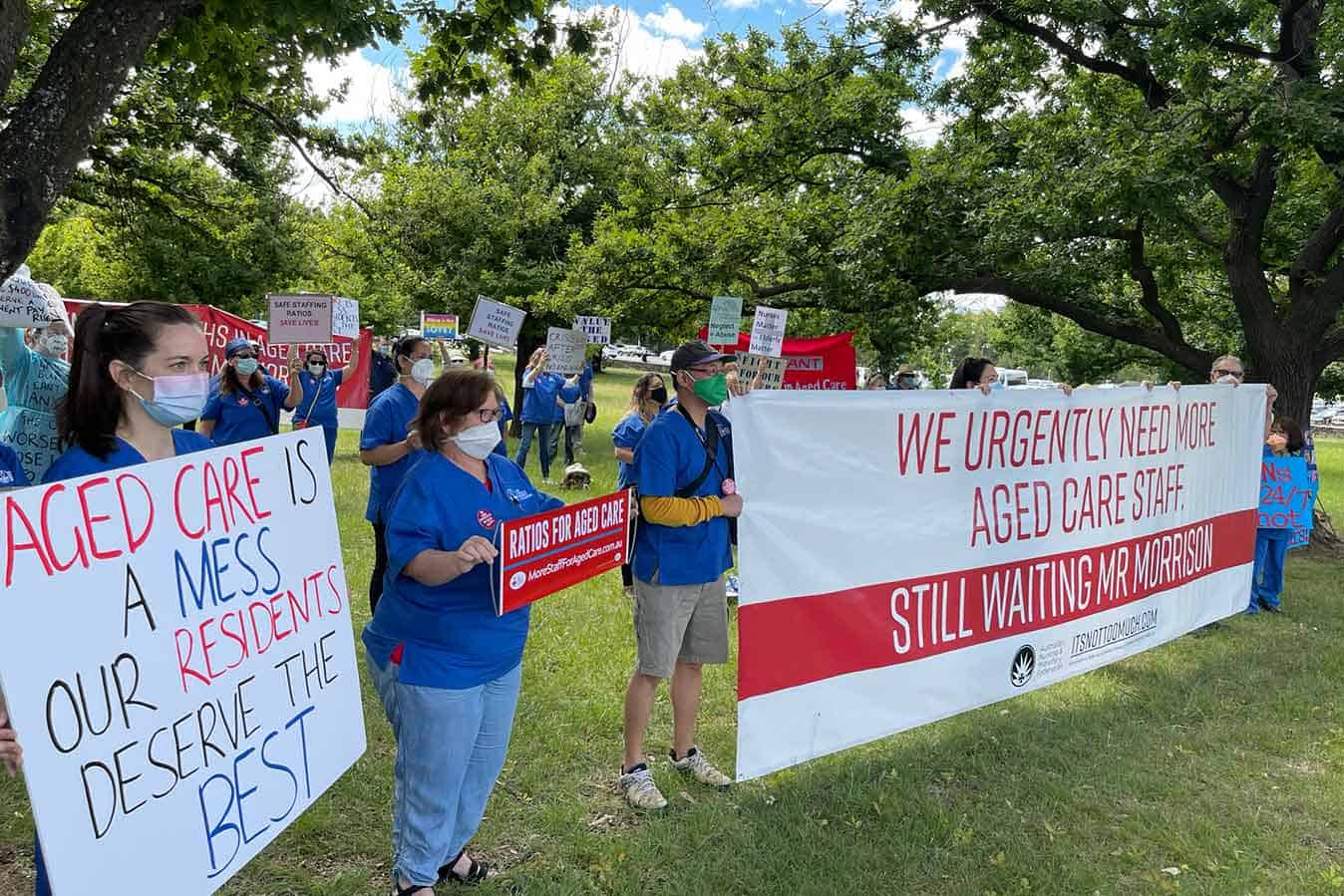 Ms O’Neil promised a Labor Government would act to fix aged care, including a pay rise for workers, and safe staffing.

Greens leader Adam Bandt made a similar pledge, saying: “We will fight to make sure that aged care workers and the aged care system gets the support and the reform that it needs”.

“You gotta pay staff properly and you gotta have ratios, and you don’t get proper care unless you’ve got that.”

Also addressing the rally, Senator Rex Patrick, who spearheaded a Bill requiring aged care facilities to have a registered nurse present 24/7, agreed that the aged care crisis had reached a tipping point.

Mr Patrick said he was staggered that the government has not acted on the Aged Care Royal Commission’s Final Report, which was handed down 11 months ago and contained 148 recommendations.

“We have a crisis that is taking place [in aged care]. Right now, there are elderly people dying [and] we have to stop this. Old age is a privilege, it shouldn’t be a punishment.”

Ms Butler vowed aged care nurses and workers would not stop fighting to fix the crisis in the sector.

“We won’t rest and we will be back and we’ll be back again and again before the election until we get this changed.”