‘What have they done?’: Aged care workers to rally across country one year on from Royal Commission’s damning Final Report

Today marks one year since the Aged Care Royal Commission’s Final Report exposed what many in the sector have known for decades – elderly Australians living in privately-run nursing homes are receiving sub-standard care due to chronic understaffing.

Twelve months on, little has changed for residential aged care residents, with the Morrison Government failing to honour its promise to fix the escalating crisis in the sector and achieve real reform.

Aged care nurses and carers will stage a series of protests today across the country outside the offices of Government Ministers and MPs, including the Devonport office of Senior Australians and Aged Care Services Minister, Richard Colbeck. They will share their heartbreak and disgust that the Prime Minister ‘hasn’t done his job’ to stop the suffering of elderly Australians living in aged care.

The two-year Aged Care Royal Commission, which drew over 10,000 submissions involving harrowing evidence from nurses, carers, residents and their families, found Australia’s aged care system is understaffed, and the workforce underpaid and undertrained. Inadequate staff levels, skills mix and training were the principal causes found for substandard care in the current system.

The Royal Commission recommended that staff ratios be introduced into aged care, yet, a year on, and despite critical staffing issues exacerbated by the COVID-19 pandemic, the Morrison Government has done nothing to address longstanding issues.

Angry, frustrated and dismayed by the Government’s lack of action, aged care nurses and carers are speaking up in a series of national TV and radio commercials and a social media campaign, commencing today.

In one TV ad, aged care nurse Samantha wipes away tears as she says: ‘If you were to come into an aged care facility and see what I see every day you’d be heartbroken, you’d be disgusted and you’d want to make change too’. 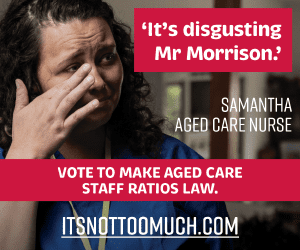 At rallies across the country today, nurses and carers will question why the Morrison Government has failed to take action to fix aged care. The ANMF will also be taking part in an online forum, ‘Aged Care in Crisis: 12 months on from the Royal Commission – what needs to happen next?’ involving members of the aged care workforce and a panel of aged care advocates and experts.

Commenting on today’s day of action, ANMF Federal Secretary Annie Butler said nurses and carers were fed up and voicing their disgust that Mr Morrison and his Government have done nothing to reform the sector.

“A year since the Royal Commission delivered its Final Report, with one of the key recommendations for staffing ratios, nothing’s changed. There’s still not enough staff to give residents the basic care they need,” Ms Butler said.

“While the Prime Minister, Health Minister and Aged Care Minister refuse to do their job, our members will not. Nurses and care workers will not stand by and watch those in our care suffer any longer – the message is clear, no more talking, no more ‘taskforces’, no more ‘inquiries’, no more deferring responsibility – only action.”

When the ANMF (Victorian Branch) surveyed its private aged care members in February, 70% reported staffing levels are worse now than they were a year ago, saying it is affecting their ability to provide residents care, including basic hygiene, mental health needs, social care and wound management.

Based on the union’s calculations comparing the Aged Care Royal Commission’s daily minimum care time recommendation, 200 care minutes per resident per day, with actual rostered care being delivered, it found some residents are missing out on almost an hour and a half of care time each day.

“Shift after shift nurses are experiencing moral distress because they don’t have enough hands or enough time to make sure residents receive the care they need.”

“Aged care has been one of the most critical workforces in the country throughout the pandemic, workers risk their health and safety continuously during outbreaks to ensure the safety of residents,” she said.

“This issue isn’t going away. How can the government sit back, and watch loved ones suffer, watch staff hit breaking point and not do anything about it?”

“With the federal election around the corner, the Morrison government can no longer hide from its responsibilities in aged care,” Ms Candish said.

“Our aged care members have had enough of the empty promises by this government, and inquiry after inquiry with little action to address the widespread concerns plaguing the sector.

“We won’t be going away and intend on doing all we can to ensure all candidates in the upcoming federal election commit to fixing aged care as a priority.”