“We sometimes laugh that we are coiled springs – waiting to respond,” says Kelly Lynch of her role as a community remote area nurse.

Kelly has been in the Cape, far north QLD for seven years. Originally from New Zealand, having raised five children, a marriage break up prompted a life change.

“Half of my family are from Australia and they encouraged me to come over. My daughter lived in Derby, WA (the Kimberley), her husband is a pilot and I got to see a glimpse of what life was like living [in remote Australia].”

Kelly couldn’t warm to the idea of working in a hospital. “I was nursing in hospitals for 35 years; I have done most things in that time in hospitals. I thought I’ve got to do something new. I thought about mental health or remote nursing.” 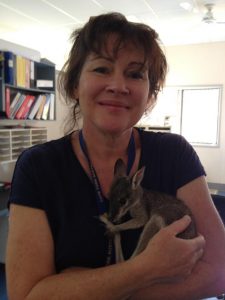 She returned to NZ, to gain some ED experience on advice from a nursing agency, in Wellington Hospital before heading to far north QLD two years later.

“I flew in to Cairns and then on a little plane to Mornington Island and I just thought ‘OMG this is amazing’. It was Australia but unlike anything I had experienced. There was no one to meet me; there were a couple of stray dogs and eventually a grumpy health worker turned up.

“I stayed three months. I loved the people. There was something very real about it. My first patient was a 14-year old girl. From some memory I had, I recognised that she had a syphilis chancre.”

Kelly and a former colleague from the ED applied for a two-person remote area posting and got positions at high-profile Aurukun for seven weeks.

“It was immensely challenging. There was a lot of violence; a lot of domestic violence and sexual abuse. My colleague found it really hard even though he was an experienced ED nurse.

“I loved it; I had to be dragged out three years later. I had been a clinical nurse specialist of a head and spinal injury ward for seven years. I just thought, ‘I am in a head and spinal injury ward’. Everyone had a head injury, whether it was from alcohol intoxication, foetal alcohol syndrome, effects from malnutrition, or physical injury from violence. People had no filter they would go from 0 to 100 instantly; they can be very volatile and very reactive.”

Kelly says it was the authenticity about people in Aurukun that appealed to her.

“We saw stabbings, a young girl was shot in the neck, drownings, people setting themselves on fire, unbelievable traumas. I am nearly 60; it didn’t frighten me. For me with all the things I’d done, it all came together.

“It was community primary healthcare. It was so generalist, it could be a flat, unresponsive baby, to kids with lots of school sores, to older people needing palliative care and traumatic deaths.”

The RFDS doctors in the Cape were extraordinary, says Kelly. “There was such trust and mutual respect. I could pick up the phone at night and say ‘Its Kelly here’ and they’d say ‘What do you need?’”

Kelly says she made wonderful friends in the community, including with the local art group. “A well-renowned artist would take me to go get ochre, and to the salt pans.

“There was nowhere to go, there’s no movie theatre. I got a boat licence and learnt how to fish.”

Kelly met her now husband, Mark, a nurse from NSW while in Aurukun. They have lived and worked together in Laura, a small town in the Cook Shire, Cape York Peninsula for the past three years. Laura, population about 80, has one pub, one shop, one roadhouse, and one school.

“It’s just the two of us for a tiny community which fluctuates. Laura is the only access to the Cape; we have 60,000-80,000 people drive through here to go to the tip.

“We get everything, from grey nomads having heart attacks to accidents and trauma.

There’s a small Indigenous community; we do Indigenous primary healthcare and chronic disease.” 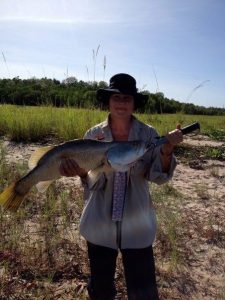 Kelly says she is sadly, more cynical rather than hopeful about the health of Indigenous Australians. “We need to fix food availability and quality, the expense is outrageous, and improve employment and housing. What we are doing [as healthcare professionals] is really insignificant until those issues are addressed.”

Every two years in Laura there is a dry Indigenous dance festival which attracts 8,000 people and the SES, QLD ambulance, and two extra nurses assist in emergency healthcare. Laura also holds a rodeo every year with up to 4,000 people in attendance. “Last year we distributed 1,000 condoms. There are a lot of young people; there are drugs. We are like coiled springs – waiting to respond,” says Kelly.

Between them, Kelly and Mark have seven children and three grandchildren, aged under two years. They’ve bought a house in Maclean, NSW to be closer to family and plan to leave Laura next year. Kelly insists she will remain a community remote area nurse, doing stints through an agency. “I find that I’ve practised too autonomously now to go back to the more rigid structure of a hospital system.”

She advises anyone interested in remote area nursing to first gain experience in the ED. “It’s not just the skills that you learn in the ED, it’s about facing the public in its rawness all the time. I think other skills you can learn and pick up. Come with the right attitude, with an open mind and not to be judgemental. Have the courage to give it a go as it’s great.”