Tales from ‘The Half Century Nurse’

Registered nurse/midwife Janene Steward retired back in February exactly 50 years on from the day she began nursing.

In the lead up to the milestone she penned an e-book, The Half Century Nurse: A Memoir, after taking the advice of friends and colleagues who believed her diverse career was different to the norm and would make for interesting reading.

The resultant e-book recounts Janene’s fascinating nursing career in settings including the operating theatre, as a volunteer in Asia and making a difference to Indigenous communities as a Remote Area Nurse (RAN).

“The message I want to get out there is that you are not tied to a hospital ward to a rotating roster that you’re unhappy with. There’s a lot of very unhappy nurses in nursing. There’s a lot of horizontal violence in nursing and I think a lot of it is because of the frustrations of nurses who don’t actually look outside the square to see what other avenues they can use their nursing qualifications in,” Janene says of her e-book’s ethos. 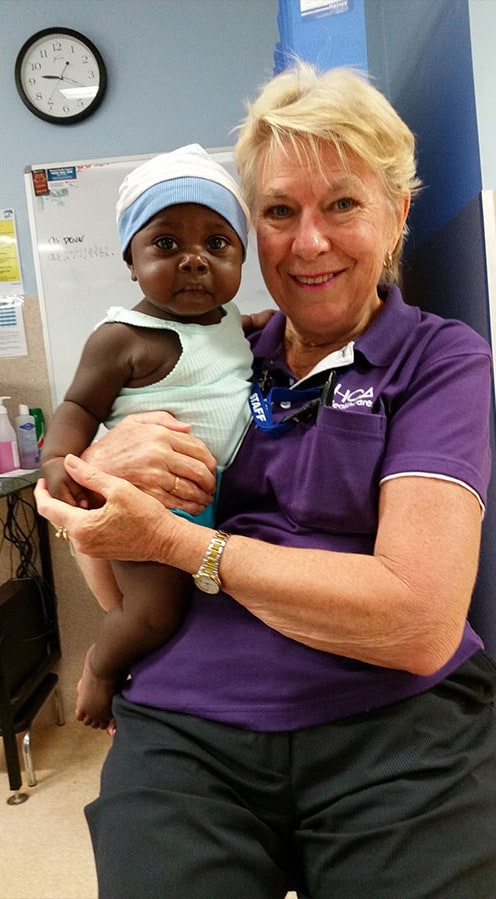 Janene followed in the footsteps of her mother to become a nurse.

Her mother worked up on the Snowy Mountains Scheme on a single nurse post where she had to go down into tunnels to retrieve injured workers and deliver healthcare.

“I was just a caring person,” Janene recalls of her desire to pursue nursing.

“I really just wanted to do the sorts of things my mother did. I admired her enormously.”

During her own five-decade career, Janene worked across numerous fields.

More than half was spent within the operating theatre as an RN, manager, assistant Director of Nursing and finally Director of a day hospital.

The remaining two decades included working in the Philippines to provide care to children with cleft palates undergoing operations, leading voluntary medical teams to Vietnam to teach infection control and then being employed by International SOS to manage clinics in Vung Tau and Hanoi.

Upon returning to Australia from Vietnam, Janene says she realised that 31 years in theatre had narrowed her nursing skills to surgical intervention and that she needed to “reinvent myself”.

Working at the Katherine Hospital in the Northern Territory, she was able to manoeuvre her way into the maternity ward, the medical ward, the children’s ward and the emergency department and upskill.

With newfound enthusiasm, she became interested in Indigenous health and soon took on roles as a RAN travelling all over the country for three months at a time to undertake nurse relief programs.

“It was an amazing experience,” Janene says of her time as a RAN.

“Firstly, I had to do a lot more education. We’re literally working as nurse practitioners (NPs) without having our Master’s Degree.

“There’s a lot of nurses out in remote who are vastly experienced people. They’ve got backgrounds in either intensive care, coronary care, the emergency department or theatre as a general rule and because I had a midwifery certificate I was never without a posting when I wanted one.”

The Half Century Nurse: A Memoir sees Janene narrate her nursing career with a wicked sense of humour.

“With the book what I’ve done is expanded on the humorous and I’ve kept the traumatic [stories] to a bare minimum but I’ve mentioned them otherwise people would have thought my life was full of hilarity.”

One of the highlights is captured in the e-book’s Foreward, detailing the period when Janene had been seconded from the public sector to the private to help a hospital with its redevelopment of theatres.

“Don’t tell me how operating theatres should work,” said the administrator. “Remember my wife’s a theatre nurse!”

I was stunned. I was on secondment. I had another job to go back to. I didn’t need this crap. So I drew myself up to look him squarely in the eyes and said,“Really?” I paused for effect. “My husband was in the Royal Air Force. I didn’t realise that made me a f*cking fighter pilot!”

Another stand out anecdote involves Janene helping to save the life of a young man in a remote community who had tried to take his own life.

“I went back to the same community some four years later and that young man came to the clinic, held my hand and had tears in his eyes when he thanked me for saving his life.”

Janene suggests the passing of her husband made her more compassionate towards her patients during the remote nursing years.

“One of the reasons I went into theatre was that you didn’t have to deal with awake patients and relatives. I was very much a content person where I’d like to start a job and finish it to the best of my ability and in theatre that’s what you do. You never find out what happened to that patient, how they fared after the operation, you never see them again. It’s very much a clinical process, you just do it and get on with the next job. Whereas when I was out in remote I actually learnt the enormity of my empathy towards the plight of Indigenous people but at the same time the frustrations that all nurses and health providers have because their plight is not changing.”

Writing the e-book afforded Janene the opportunity to reflect on her five-decade career and she says the job satisfaction and camaraderie with colleagues and patients was the greatest reward.

A passionate Rotarian, Janene’s post-retirement interests will include visiting Mombasa in Kenya this September as part of a team of volunteers delivering health checks on children in an orphanage and local village.

The Half Century Nurse – https://www.amazon.com.au/Half-Century-Nurse-Memoir-ebook/dp/B07NJRRVC4