Like many expectant dads, Sam Woods was a little nervous about the impending birth of his second child early last year.

Sam and his partner Rachel live in the NSW country town of Gunnedah. It’s a few hours away from their immediate family, so they sometimes feel isolated and lack support.

Leading up to the birth, Sam stumbled across a free text-based messaging service for expectant and new dads called SMS4dads.

When signing up, dads across Australia punch in the expected, or actual, date of birth of their baby, and then receive three bite-sized texts per week containing information and support up until their baby turns one.

The messages, developed by health professionals and researchers, and reviewed by fathers themselves, aim to help new dads to better understand and connect with their baby and partner, track their wellbeing and mood, and access mental health support if needed.

“I just remember thinking that it looked interesting,” Sam recalls.

“I wanted to know more, so I signed up not really knowing what I was getting into and what it would be about.” 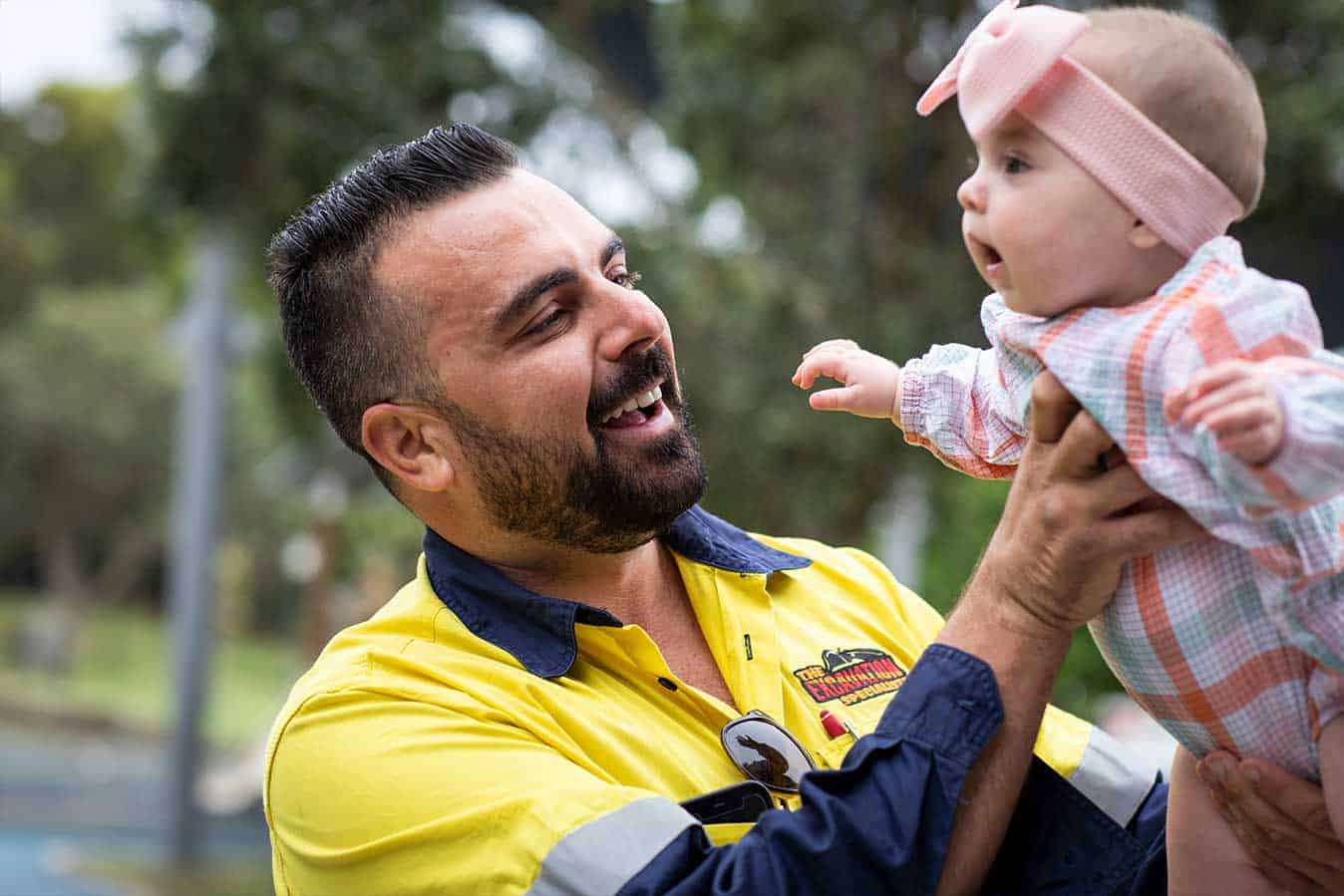 Messages provide targeted and timely information on typical stages of pregnancy and raising a newborn. For example, some messages highlight when babies begin to roll over, cry uncontrollably, or start to eat solid foods.

While not a first-time father, it had been four years since the birth of his first child, and Sam thought he and his partner could benefit from brushing up on parenting tips.

He quickly found comfort in the first few messages that pinged through from SMS4dads and decided that sticking with the service “couldn’t hurt”.

“We were looking for all the support we could get,” he admits.

“Being in a rural regional area, and fairly well isolated, with both my partner and I isolated from our parents, who live a couple of hours away, having any real form of support that we could call on was something we were after and looking for.”

SMS4dads was founded by Richard Fletcher, a researcher at the University of Newcastle, and longtime advocate for the role and importance of fathers in childbirth and the need to support their mental health and wellbeing.

Despite growing awareness about the need for father-engagement by perinatal services and of paternal mental health, research shows maternity services are largely mother-focused. Fathers are positioned as ‘supporters’ to mothers, often miss out on clinical support, and are left to navigate the journey alone.

For the past 30 years, Associate Professor Fletcher has tried to raise awareness about the need to better support men as they transition into fatherhood.

He worked with various health services, and health professionals such as midwives, to get the concept off the ground, with limited success. His 2008 PhD, which involved sending emails with supportive information to dads during the time of birth, similarly netted mixed results.

Years later, in 2015, he was approached by mental health and wellbeing support organisation Beyond Blue, to use funding it had secured, to set up dads groups across Australia. 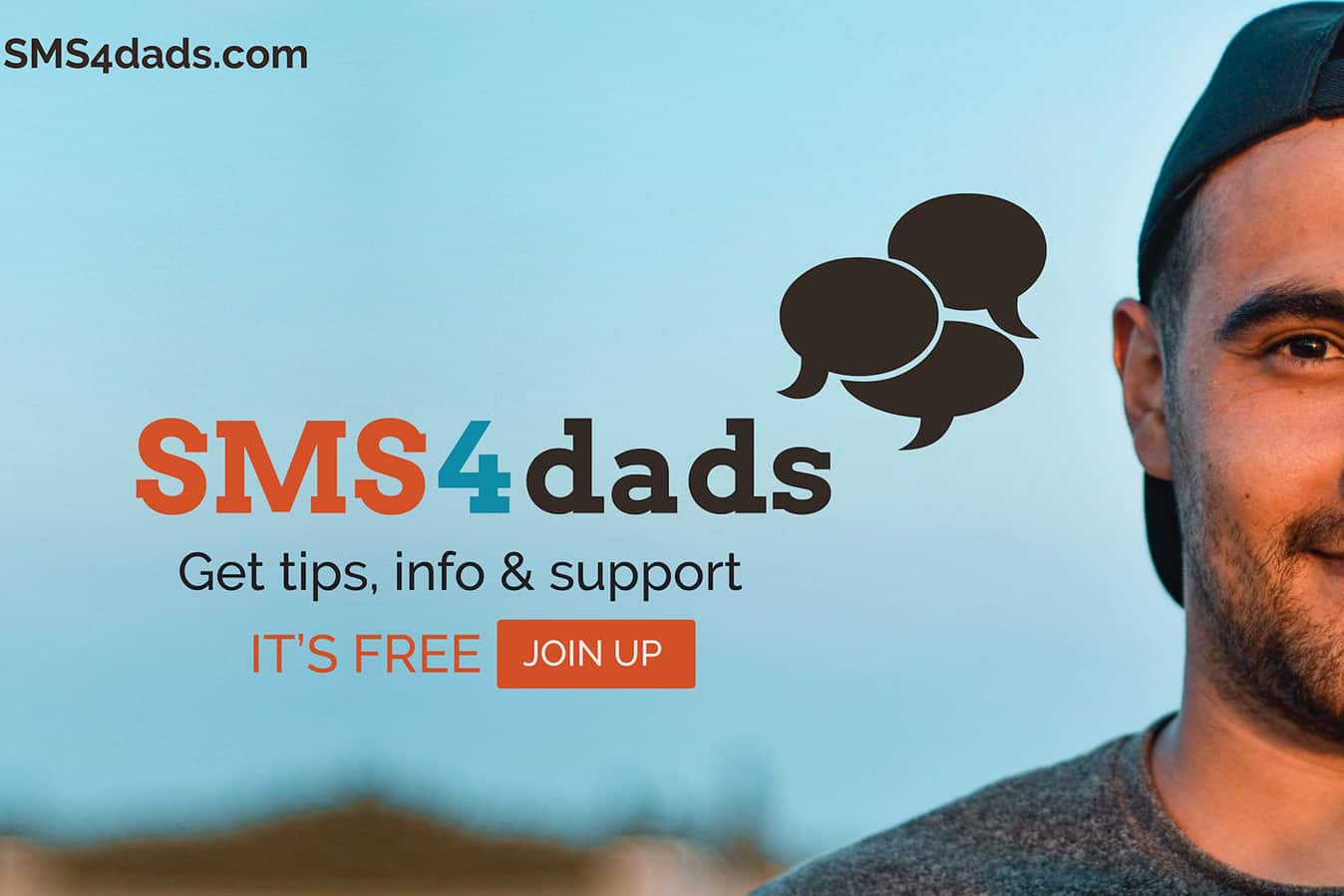 The funding eventually helped launch SMS4dads nationally, with over 500 dads signing up at the start. Seven years on, almost 10,000 dads have used the service since its inception.

While SMS4dads initially received funding from Beyond Blue to get off the ground, it now relies on a series of grants from a variety of organisations to continue to run the service. One of those is a contract with the Department of Health, until 2024, to expand the use of SMS4dads among specific groups, such as Aboriginal and Torres Strait Islander dads. Other projects are supporting dads/or partners who experience mental health issues, and dads and their partners who experience the loss of a baby from miscarriage or stillbirth.

The service currently has about 2,500 users, who can join from 12 weeks’ gestation up until their baby turns one, across Australia.

Associate Professor Fletcher believes SMS4dada has helped change the perception of the role of fathers and lent a helping hand. A father’s bond with his baby is important but it can often be difficult for men to know where to find the right advice that they may need during pregnancy and early parenting. SMS4dads fills that gap.

Importantly, feedback from dads overwhelmingly backs the service, with most thankful for the ongoing support, encouragement and advice.

“This has been a massive support for me. Every tip has helped form the dad I’ve become in some small one,” one user said.

“When things were tough, the texts made me realise that it wasn’t just me experiencing these things.”

Associate Professor Fletcher attributes the simplicity of the text messages to part of the service’s appeal.

“It’s not rocket science. It’s not telling them things that they’ve never thought about,” he explains.

“It’s often that they aren’t sure, and the message from a reputable place saying ‘yes you’re doing the right thing’ gives them relief and they’re able to get on with it. A lot of the benefits that dads describe are things like ‘oh I never thought of that’, but more often it’s saying that the encouragement helps them not to stress out about what they’re doing, and that they feel less isolated.”

Moving forward, Associate Professor Fletcher says SMS4dads continues to build awareness of the benefits of its service among expectant fathers and health professionals who work with new parents. The service works with midwives, nurses GPs and other health professionals to promote SMS4dads and the role of fathers in perinatal processes.

“We think dads are really important and dads often underestimate how important they are,” he says.

“Attachment is still thought of mainly in terms of mothers and babies but fathers’ attachment has a big effect on how babies develop and dads usually aren’t very aware of that.”

He regularly relayed the texts to his partner, and would often find that the information married up with how she was feeling at different stages of the pregnancy.

“I think it was just the general feeling of it and the encouragement and support,” Sam says when asked about the biggest difference SMS4dads made to his family.

“Even though it was just coming through as a text message, I felt like there was another layer of support there for me.”

“It’s not something you can pull up and have a chat with, but you knew you can call on a mate or talk to or someone else if needed.”

Sam says he would highly recommend the service to any new dad looking for some additional support.

“They should definitely give it a go. It doesn’t hurt to have some extra advice, or just general reassurance to know that you’re doing ok, you’re doing the right thing and you’re doing the best you can to help out yourself and your family.”

SMS4dads is available nationwide. It’s easy to join up and IT’S FREE.  Dads simply join up online at www.SMS4dads.com by entering their mobile number and baby’s due, or actual, date of birth. They are then sent three text messages a week straight to their phones. The messages directly related to the age and stage of their bub.