Australia’s deteriorating aged care sector cannot wait until the findings of the Aged Care Royal Commission are handed down in November next year and urgently needs mandated ratios to address its chronic understaffing issues as well as greater transparency to ensure billions in government funding is tied to care.

That was the powerful message from aged care reform advocate Sarah Holland-Batt as she shared her father’s shocking experience in the system with delegates at the Australian Nursing and Midwifery Federation’s (ANMF) 14th Biennial National Conference in Melbourne this month.

“We have ratios in childcare and in hospitals for a simple reason, they actually work,” Associate Professor Holland-Batt told delegates.

“They improve patient outcomes. They maximise staffing efficiency and they set a bare minimum standard. It’s my view that knowing what we know out of the Royal Commission about how dire the situation is in aged care in Australia, the government’s continuing reluctance to mandate ratios is tantamount to criminal negligence. There’s no excuse not to act on this issue.”

Associate Professor Holland-Batt gave evidence at the Royal Commission back in August detailing the story of her father, who was diagnosed with Parkinson’s disease in 2000 and has lived in a Gold Coast aged care home since 2015.

She said his experience has been plagued by appalling suffering, unnecessary injuries, neglect and deliberate abuse from a carer.

“Dad’s story is not unique. It’s pretty familiar. It’s not the worst story to come out of the Royal Commission. Dad has experienced a litany of failures that’s almost an expected trajectory for people in aged care in Australia,” she said.

Associate Professor Holland-Batt told delegates how her father, an academic with a PhD in Metallurgical Engineering, was shattered when diagnosed with Parkinson’s at the age of 64.

He remained home for 14 years until his care needs became too demanding.

“Eventually his falls became too frequent, his needs too complex, and with great reluctance after a stint in hospital, Mum and I had to move him into aged care.”

Associate Professor Holland-Batt said she and her mother did their homework and chose the best facility they could find, one that had never been under sanction and had passed all 44 accreditation standards with flying colours every time.

“It seemed to have everything you would want. It seemed pleasant. We’d seen a lot worse when we were inspecting facilities.”

Her father found the transition into aged care tough, she recalled.

“He was still quite high-functioning. He was bored and depressed. Mum and I did everything we could to brighten his days. We’d bring him stacks of books and visit almost every day or daily. We bought an electric keyboard for him to play in his room.” 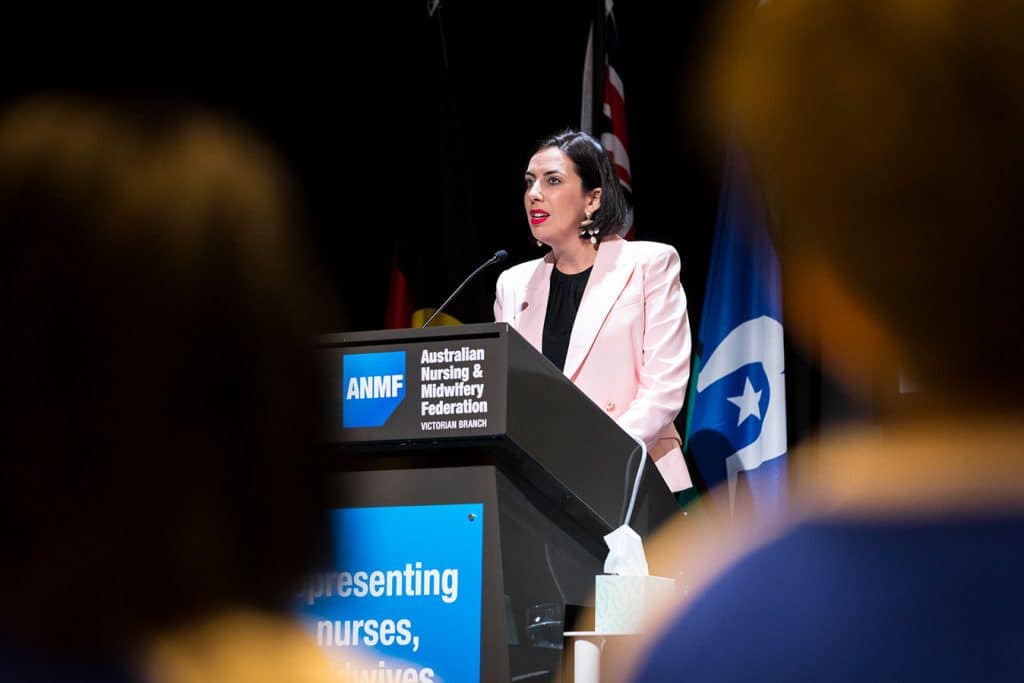 “He was frequently dishevelled. We’d find food on his face. He’d be wearing stained clothes and it wasn’t clear whether he’d been showered or not.

“He had little injuries. Grazes, cold sores, things like that, that didn’t seem to have been brought to the attention of staff so Mum and I sort of became de facto care managers, having to intervene constantly saying ‘Have you seen this? What is this?’ So that was quite frightening.”

One of the most alarming issues concerned her father’s Parkinson’s medication Madopar, which helps aid mobility and walking, not being administered at the correct time.

The lack of staff was also an eye-opener.

“The most shocking thing during that first period was how few staff there were,” Associate Professor Holland-Batt said.

“I would walk through Dad’s hall and maybe there would be one or two carers and occasionally no RNs because they were in another building for around 40 residents.

“You would hear motion sensors pinging and no one there to help. You would hear people calling out and Mum and I would then start to intervene.”

The first major incident occurred when Associate Professor Holland-Batt’s father was mistakenly prescribed medication that completely negated the effects of the Madopar.

The error wasn’t picked up for five months.

“Then Dad fell because there was no one there to take him to the toilet and he tried to take himself. He broke his hip and then he was rushed to hospital and given an emergency hip replacement that the doctors and the hospital told us was likely [to mean] he would never walk again. It turns out they were right.”

Confined to a wheelchair, Associate Professor Holland-Batt’s father returned to the aged care home and the cluster of problems continued.

One morning, while being wheeled into breakfast, a tennis ball sized infection was discovered on his elbow and he was rushed to hospital, with doctors expressing their alarm at how it had gone unnoticed for so long.

At this stage, Associate Professor Holland-Batt and her mother began demanding answers from the facility about the infection and overall lack of care.

Amid the questioning, a whistleblowing nurse came forward and revealed to the family that the carer responsible for his care and showering had been neglecting him, leaving the infection untreated and deliberately victimising him.

“We were told that this carer had pushed Dad’s wheelchair away from his bed so he couldn’t get out of bed. She had taunted him verbally and said she was sick of this shit and that he should get his own nappies and they were out in the hall knowing that he couldn’t go and get them.”

The family immediately confronted the facility and sought an urgent meeting and explanation.

“I naively at that point expected the facility would act swiftly and fire this person who was clearly profoundly unsuited to the profession she found work in. Instead, the facility manager suggested first of all that Dad should meet with this abusive carer and have a conversation about what had happened, which I thought was profoundly inappropriate and a ridiculous situation,” Associate Professor Holland-Batt recalled.

She says the facility manager wasn’t upset with what had happened to her father, but instead more concerned with identifying the whistleblower.

He also offered to move her father’s abuser to another wing of the facility, a suggestion she firmly rejected.

“The facility eventually stonewalled my Mum and I. They kept insisting on identifying the whistleblower and went about a campaign among the staff, interviewing all of them to identify the whistleblower.”

Associate Professor Holland-Batt says she felt distraught during the period and reached out to numerous parties for help, including the police, elder abuse authorities and the former Aged Care Complaints Commission, without avail.

“It was just a really lonely and debilitating time. No one seemed to care. I was alarmed at the notion of this woman still being in the system.”

Eventually, Associate Professor Holland-Batt and her mother convinced the whistleblower to go on the record.

She did so, risking fear and retaliation from her employer, to trigger change.

“The abuser was fired from Dad’s facility but because there’s no regulation of personal care workers (PCWs) she is likely still in the system which is another thought that haunts me.”

Associate Professor Holland-Batt said the problems at the facility haven’t gone away in the two years since the harrowing period.

Her father remains at the facility because he is too frail to move and gets panic attacks when he’s taken to unfamiliar areas.

“It’s absolutely sickening and I wish there were other options for Dad but I looked around the Gold Coast and there’s not actually that many options. So we’re now trying to move him somewhere but it’s very hard to have faith in any of the providers given the lack of regulation that goes on.

“It’s the reality of aged care in Australia today. We have toothless regulators, no minimum staffing requirements and entirely inadequate protections for our most vulnerable enshrined into law.”

Associate Professor Holland-Batt told delegates she believes her father’s damaging experience with the aged care system, together with many similar stories across the country, can help act as a catalyst for long overdue reform.

“In my view, to fix what’s happening in aged care, we have to begin with empathy,” she explained.

“We need to remember that residents in aged care can experience joy and sadness and pain just like us. They can have a good day or a bad day, depending on how well we protect them and care for them.”

Associate Professor Holland-Batt called for cultural change in the way care is delivered that places the same emphasis on psychological and emotional wellbeing as medical needs.

She also proposed a national care register for PCWs, transparency when it comes to government funding so it is tied to care, better incentives for providers to maintain or improve resident care, and a robust and independent regulatory and a complaints process that properly investigates issues.

“We urgently need to see the chronic understaffing addressed with mandatory ratios, transparent publication of staffing numbers and RNs on site 24 hours a day,” she said.

“Our elders deserve so much better than the current system. These are our grandparents and our parents, our neighbours, our colleagues and friends. We owe it to them to demand a kinder, more compassionate sector that is robustly regulated and adequately staffed.”