Nurses and fellow frontline workers including police and paramedics converged on Parliament House this week for the ACTU’s Emergency Services Summit on Australia’s bushfire crisis, sharing gripping first-hand accounts of responding in fire affected communities and standing together to push for a range of better resources and urgent action.

The Emergency Services Summit set out to canvass the most critical issues facing frontline workers dealing with the bushfire crisis and what role the trade union movement can play in lobbying State and Federal Governments to commit to improved measures as the scale and frequency of bushfires grows.

Calls for action triggered by the summit include the need to lift the “woeful inadequacy” of the current Disaster Recovery Allowance (DRA) payment, changes to workers’ compensation laws so frontline workers responding to fires who experience mental health issues such as PTSD do not have to prove their claim, and a comprehensive mental health strategy to support workers in fire affected communities.

The ACTU is also seeking properly funded public services across the board to ensure the nation is prepared for future emergencies, as well as a comprehensive prevention plan to address climate change and bushfire risk.

“This has been an extraordinarily moving and powerful example of what working people have had to go through over this fire crisis,” ACTU president Michele O’Neil said of the stories that emerged from the summit.

“We’ve heard about the fact that we have a problem here in Australia with huge under-resourcing of what is needed to prepare us for emergencies.”

Ms O’Neil said the summit revealed widespread cuts to frontline services at both a state and federal level, leaving communities with insufficient resources, staff and equipment to protect residents.

“This is a huge issue that is not one that is being addressed adequately by the Federal Government.

These frontline workers have been dealing with the bushfire crisis all summer. They have flown to Canberra for the #EmergencyServicesSummit. pic.twitter.com/x54RBWntv0

Under one proposal to boost income support for workers financially affected by the bushfires, the ACTU is calling on the Federal Government to lift the Disaster Recovery Allowance (DRA) payment from its current $559 maximum per fortnight for an eligible single person with no children, up to the national minimum wage of $1,481.60 per fortnight for a period of 13 weeks as an urgent interim measure.

“Forty dollars a day is not enough to live on,” Ms O’Neil said.

“For many workers, their workplace has shut down, they’ve lost hours and shifts and wages and income and they’re in desperate circumstances. They can’t feed their family properly. They can’t pay the rent. They can’t pay the mortgage. We need to be putting money in the pockets of those workers.”

Diane Lang, a registered nurse who works in the surgical ward at the South East Regional Hospital in Bega and a NSWNMA councillor, represented the nursing profession at the summit, sharing her experience with the bushfires and their impact on local towns, services and the hospital. 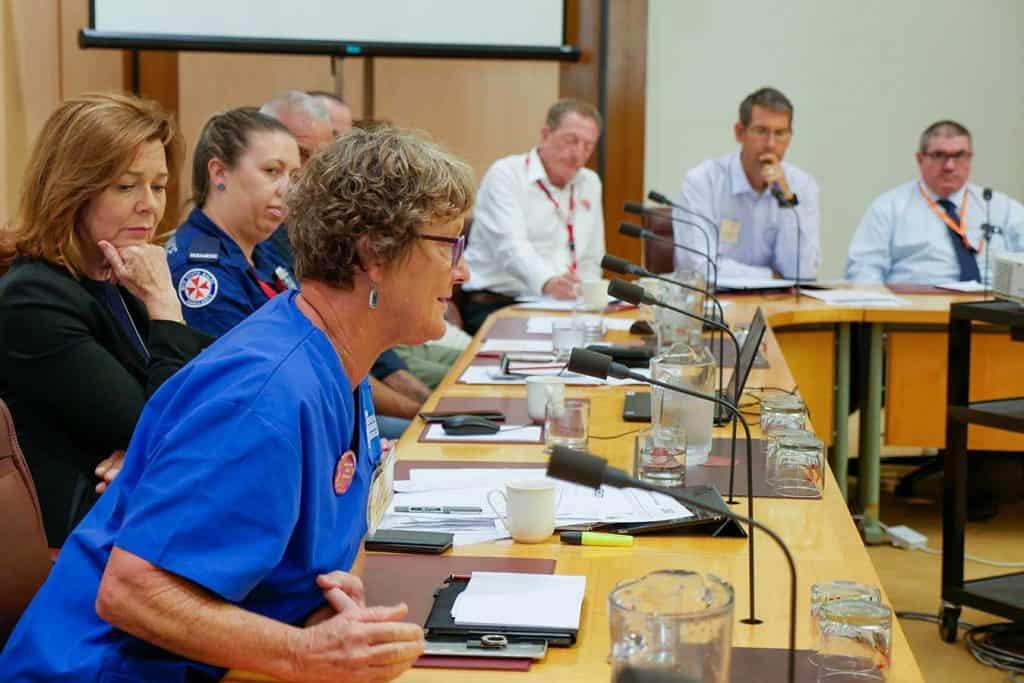 She was working a nightshift on New Year’s Eve when a firestorm began snaking its way up the coast.

Hospital staff could see the flames in the distance and were readying themselves for admissions and potential burns and injuries.

“We had a firestorm that came through in two angles from the southern area and the northern area. We had victims that had been burnt. We had people that were emotionally scarred and we had not enough staff,” Diane said in Canberra.

Diane continued working until 3.30pm the following day, helping out with discharge to ensure the hospital could cope with the likely influx of admissions.

Speaking at the summit, Diane used her platform to highlight staffing issues at the hospital, arguing that resources were already stretched prior to the bushfire disaster and that the events strengthen the case for more funding to ensure safe levels.

Extra nurses were deployed to the hospital in the aftermath of the fires but their assistance will soon end.

“I think we need to pat ourselves on the back for how well our community and our hospital performed in the first week but we were understaffed to begin with,” Diane tells the ANMJ.

“We had issues before any of this happened. We see things differently to the Local Health District. We believe we need ratios.

“We need more nurses on the floor. My message was we need more services and we need to make sure that our mental health is addressed adequately by making sure we have enough staff.”

Diane, who lives in Merimbula, about 40 kilometres away from Bega, said she felt honoured to have been given the opportunity to attend and speak at the summit alongside fellow frontline workers.

“I felt like I was part of a community of people wanting to improve [things] and wanting to point out to the government our side of the issue because the government’s not really seeing that.”

No government ministers turned up for #EmergencyServicesSummit

“The government has listened to small business and the tourism industry. To not hear the voices of workers who have been saving lives is a huge gap in the government’s knowledge.” – @MicheleONeilAU pic.twitter.com/AlfvwMEDS9

Diane said hearing the stories of other frontline workers struck a chord, especially a paramedic from Batemans Bay who spoke about communications being down and the difficulty some nursing homes faced because they didn’t have a proper evacuation plan.

Diane said she is hopeful that the ACTU’s calls for action are taken on board, particularly the proposed increase to the Disaster Recovery Allowance (DRA) payment, and better all-round strategies to prevent bushfires.

“The saga and the same story for every single representative there was staff cuts. Major staff cuts have created a problem.”

About 10 trade unions were represented at the summit, including the Australian Nursing and Midwifery Federation (ANMF).

ANMF Federal Secretary Annie Butler said hearing the first-hand accounts of frontline workers at the coalface in fire affected communities was moving and that their insight would prove invaluable in ongoing efforts to prompt action.

“These frontline workers from across the trade union movement represent the direct response to the bushfire crisis sweeping our nation,” she said.

“Through sharing their stories, they have provided us with valuable insight into what challenges frontline workers are facing in fire affected communities and the range of measures that must be implemented to provide greater support.”