NSW public sector nurses and midwives have gone on strike for the fourth time this year in their fight for safe staffing, improved working conditions and fair pay that recognises their contribution to the health system.

Thousands of NSWNMA members from across the state are taking part in the 24-hour strike, which began this morning at 7am. During the strike, life-preserving services will be maintained across all public hospitals and health services.

Nurses and midwives say they are tired of being continually ignored by the NSW government and will continue to demand an end to the staffing crisis across public hospitals by advocating for patient safety and better staffing to ensure all communities get the clinical care they deserve.

The first statewide strike took place on 15 February, quickly followed a second at the end of March, after the NSW government failed to engage in meaningful talks about shift-by-shift nurse-to-patient ratios.

The NSWMA’s third strike on 1 September prompted NSW Labor to announce its Safe Staffing policy, a commitment that will see improvements in emergency departments, ICUs, maternity services and Multipurpose Services, and the introduction of shift-by-shift staffing levels in most wards and units. 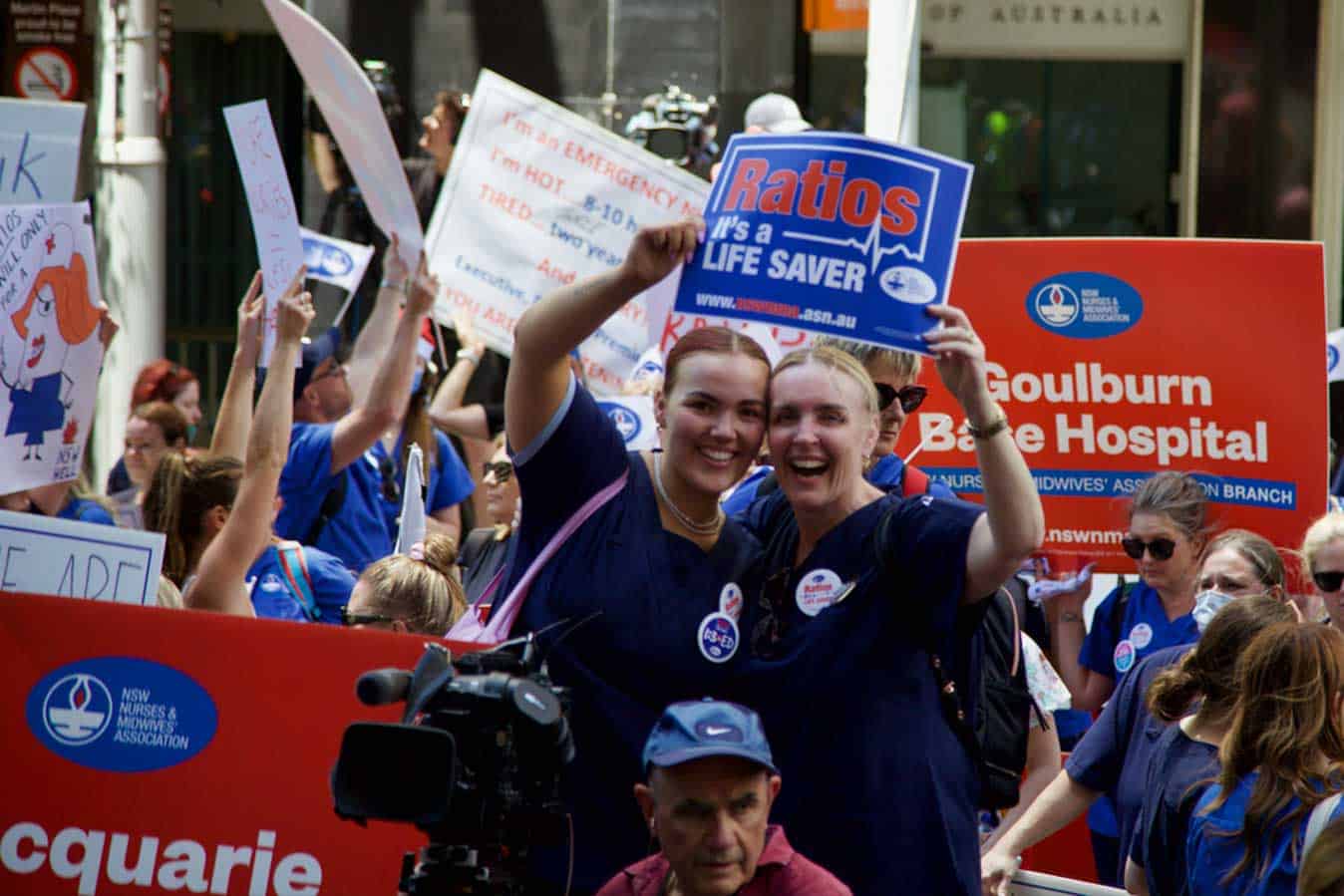 It finally triggered talks with the NSW government, yet, by mid-November, the union says no real solutions have been offered to address the staffing or workload crisis, forcing it to walk off the job for a fourth time.

Disgruntled public sector workers held rallies across the state today, including marching through Sydney’s CBD and up to Martin Place.

Speaking at the rally, NSWNMA General Secretary Shaye Candish said an unsupportive government that refuses to take responsibility for the staffing crisis was manipulating the goodwill of nurses and midwives.

“It’s now our fourth strike, we’ve been pushed around, we’ve been bullied, we’ve been fined, but we’ve stayed strong and we keep standing together,” Ms Candish told members.

Ms Candish pointed to Labor’s recent commitment to safe staffing improvements, if elected next March, and legislation introduced by the Greens to deliver ratios across NSW hospitals, as proof that change could occur if there was enough political will.

“This shows it can be done when there’s the political will to deliver for nurses, midwives and the patients of NSW. When we’re valued and our workforces are seen as an investment into the health and wellbeing of our communities rather than seen as a burden on the budget bottom line.” 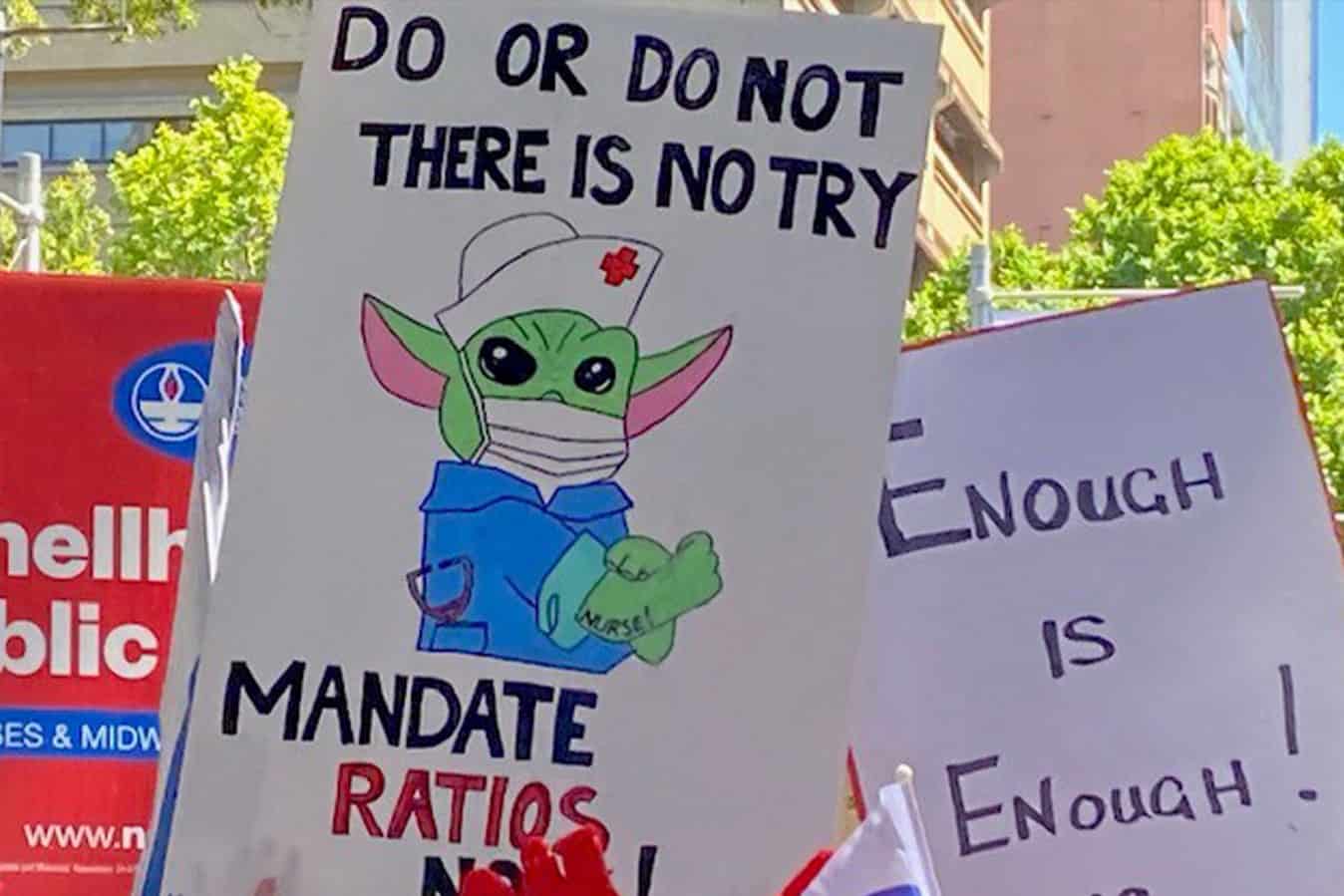 Ms Candish said nursing and midwifery in NSW was “shamefully being destroyed”, with healthcare deteriorating “in front of our eyes”. Meanwhile, the state’s workforce is being enticed by better conditions across the border.

“Double shifts are the norm. Two days off together are a luxury. Of course, patient care these days is compromised. We’ve done everything possible to hold this system together, but it’s falling down around our feet.”

Nevertheless, Ms Candish said collective strike action this year had generated the pressure needed to force politicians to do better, adding that nurses and midwives had now plans to lay down.

“Let this be a message to the current government, get on board or get the hell out!”

Addressing the rally, Wollongong ICU nurse Bianca Vergouw, a nurse for 30 years, revealed she had never seen the public health system in as bad a state as it is today. 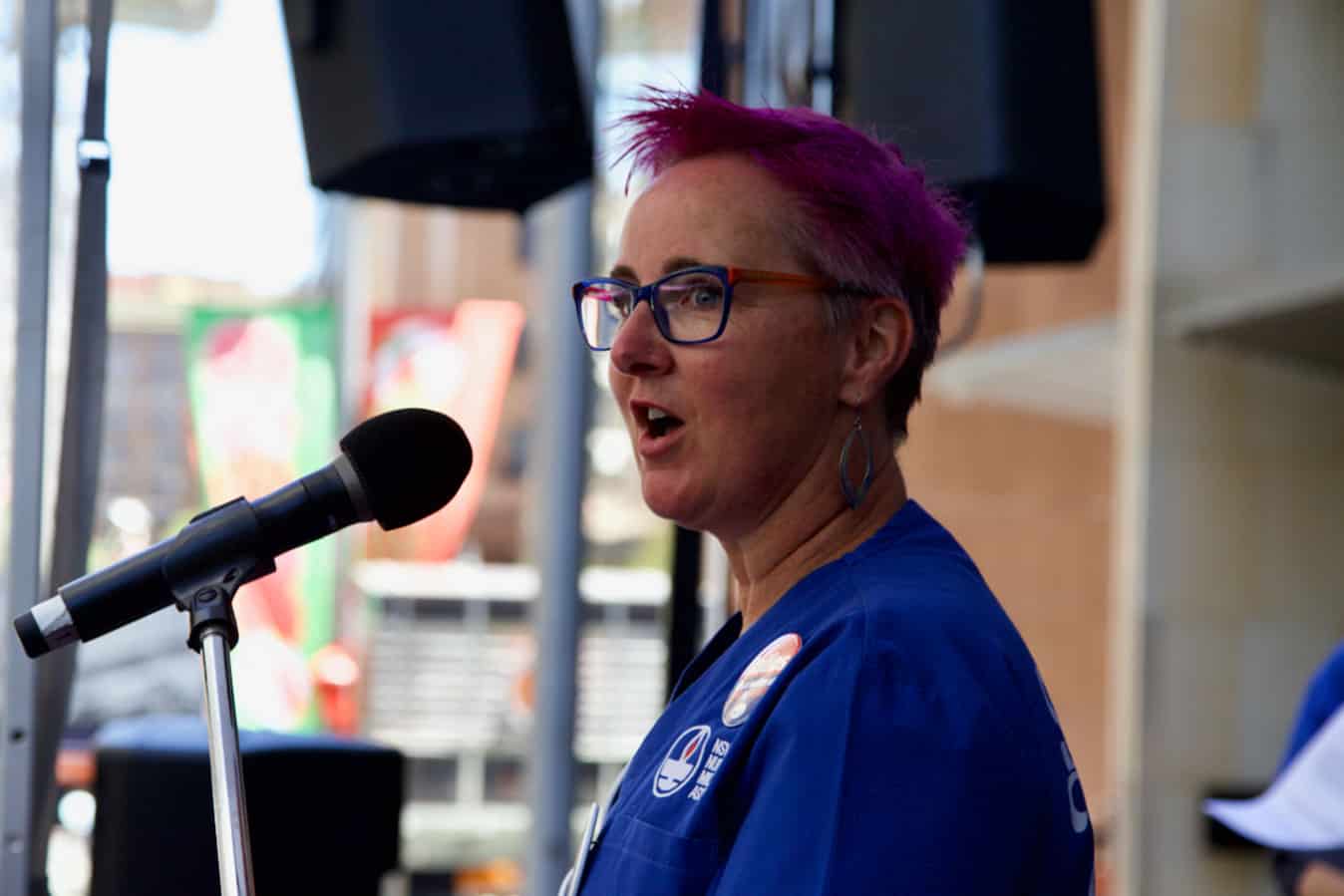 “I’m sick of having to prioritise who gets the care and what sort of care they get. It’s crushing my soul, and to be honest, I don’t know how much longer I can keep doing this.”

Theatre nurse Bob Lloyd, from rural Cooma, said the town’s 22,000 people were often forced to access healthcare interstate, away from their families and support networks, due to a lack of resources such as high-care post-operative beds. 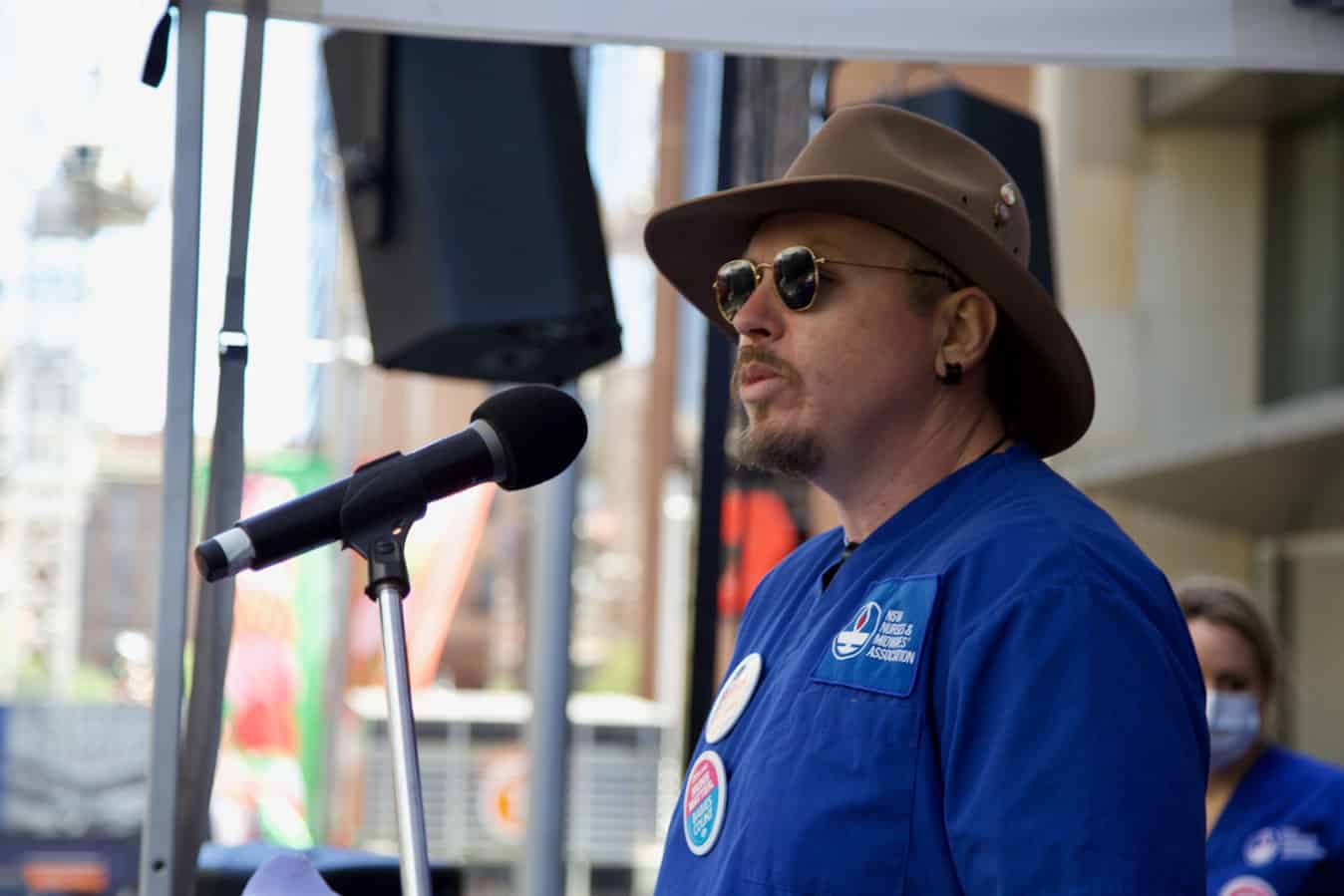 Elsewhere, staff on call, who have to put their lives on hold, typically are compensated just $7 an hour, while counterparts in Canberra get double.

“I’ve seen a decline in services, in resources and an increase in morbidity and mortality as a direct result of mismanagement from the echelons in health,” Ms Smith said.

In Wollongong alone, there is 24 full-time equivalent vacancies, about 192 shifts per week where there isn’t enough staff, she said. Most maternity units across the state are short between 20-50%.

“That’s a 192 shifts a week where there are not enough staff and we’re expected to work overtime. Our members can’t keep this up. We are tired, we are burnt out and we can’t give anymore.” 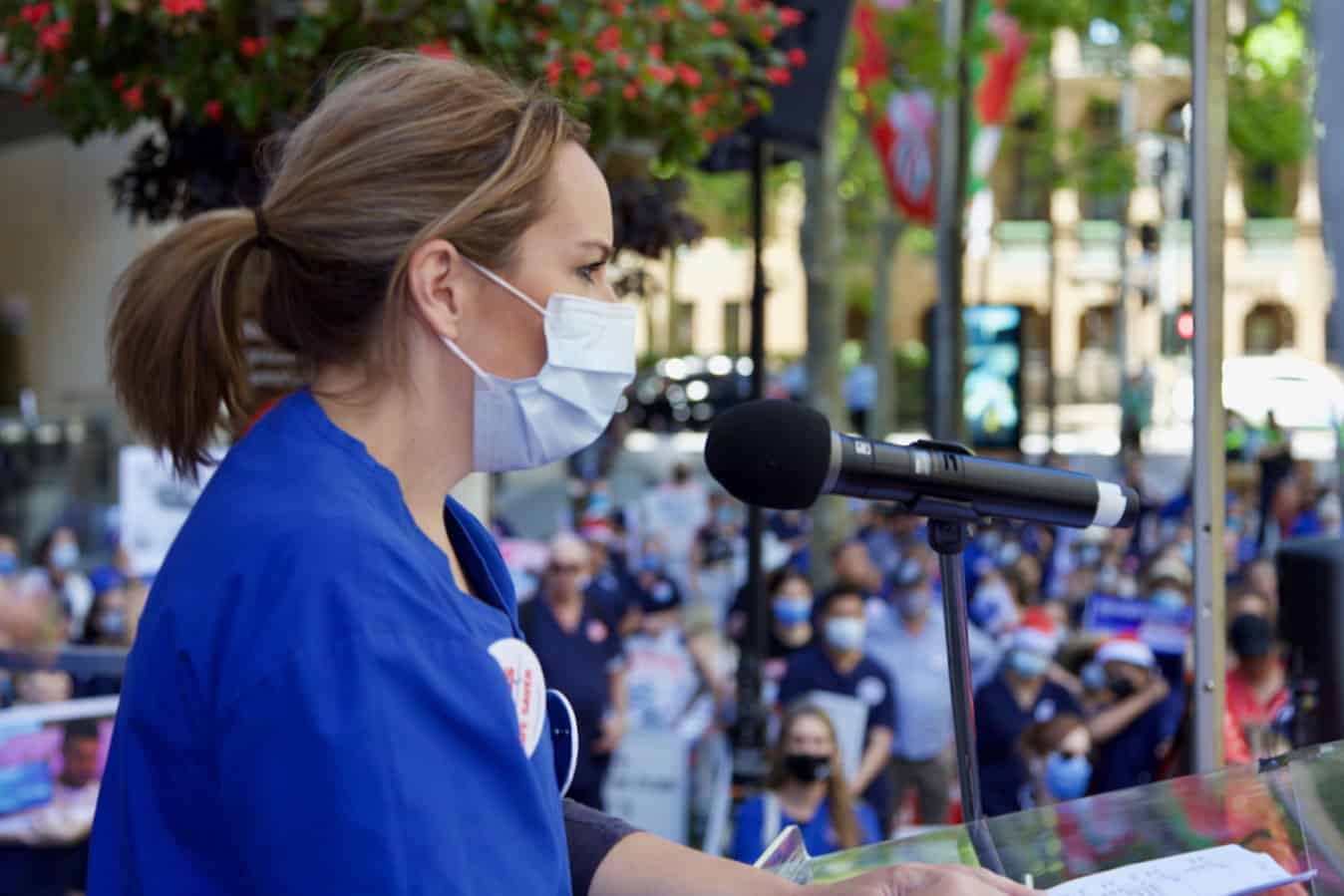 “[Dominic] Perrottet we are not going away. Your arrogance is costing lives. Give us ratios now and give our patients a chance.”

NSWNMA Assistant General Secretary Michael Whaites said the state’s nurses and midwives would not give up on their fight for better wages and conditions.

“Every day they refuse to fix the staffing crisis is another day risking patient safety and another unnecessary instance of missed care,” Mr Whaites said.

He added that the power of the collective strike action has led to a meeting with Health Minister Brad Hazzard and Finance Minister Damien Tudehope tomorrow.

“We will continue to take action like this and we will take action against any government that stands in the way of us winning nurse to patient ratios and midwifery ratios across this state,” Mr Whaites said.