With the Omicron wave surging across the country, NSW nurses, midwives and care workers are battling staffing shortages, excessive workloads and lack of access to resources such as appropriate PPE and Rapid Antigen Tests (RATs) as the health system buckles.

Nurses and midwives have voiced their anger and frustration over the mounting pressures by protesting outside hospitals in recent weeks, demanding that the NSW government urgently address the state’s longstanding staffing crisis now laid bare by the pandemic.

“We’ve had eight years of real underinvestment in our health system and we’ve got a conservative government that refuse to commit to nurse-to-patient ratios, so our members have been doing it pretty tough here almost for the past decade. Throw a pandemic on top of that and the cracks that were in our health system are now these massive crevices.”

Despite the dire situation unfolding across the state’s hospitals and nursing homes, Ms Candish says the government continues to downplay the crisis. 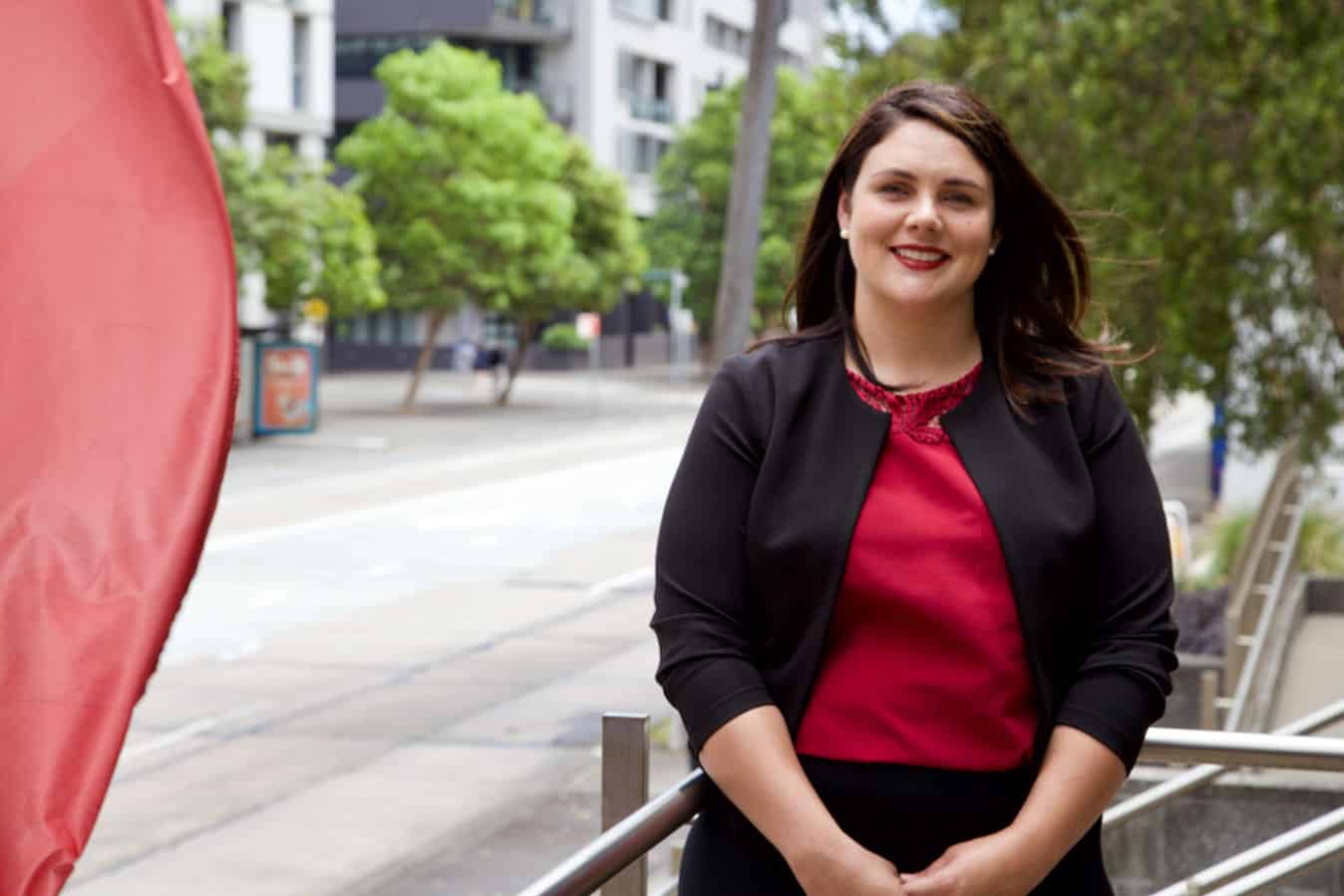 “Members are really angry because our current government continues to deny that the health system is under pressure,” she says.

“It’s just bold-faced lies and the members have had enough. They’re pretty fed up and what’s being asked of them is unreasonable; they’re working 16-hour days multiple times a week, being peppered with text messages on their days off. They’re realising that this is unreasonable and if they keep giving everything the government will just continue to take advantage of their goodwill.”

During January, the NSWNMA has been supporting an average of 110 members per day with COVID-19 issues, with 80% of all member enquiries related to COVID-19. Key issues raised with the union include transmission in the workplace, leave entitlements, workloads and staffing levels, PPE advice and fit-testing and infection control, isolation requirements, and being directed or pressured to return to work while symptomatic or after being a close contact of a positive COVID case.

“I think that [the volume] reflects the mass confusion that we’re seeing as information changes so quickly out in the health sector,” Ms Candish explains.

“It’s really difficult for the individual nurse or midwife to really stay across that information, so a lot of the time people are contacting us just to find out what their rights are and where they stand if they’re being advised something that doesn’t sound quite right.”

In a sign of growing unrest among the workforce, NSWNMA delegates last week voted to condemn the state government’s handling of the pandemic. Unsustainable pressures, including ongoing staffing issues and excessive overtime, and the inability to provide safe and quality patient care, triggered protests outside Westmead and Liverpool hospitals, with nurses and midwives holding placards that read “Stop telling us that we are coping”. 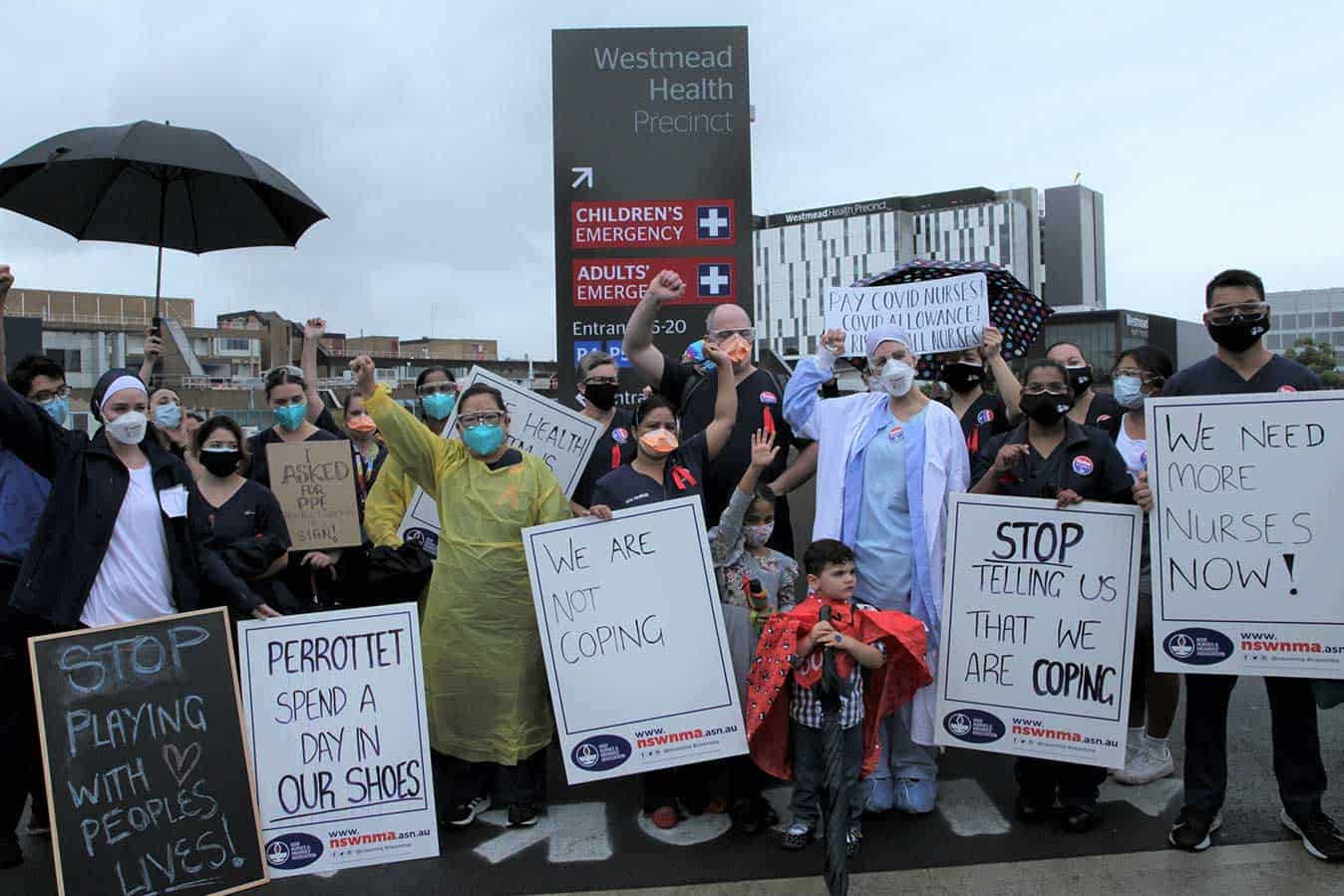 “The one thing that nurses and midwives are excellent at is telling the truth,” Ms Candish declares.

“So when we were presented with this narrative from the government that everything is okay, it really sparked so many people to say ‘that’s just not right’. And in an environment where people have often felt too afraid to stand up and speak publicly, it was just that little bit of anger that sparked them to stand up on behalf of their patients. I am proud that we continue to advocate for patients and that we find different ways to do it but when the government makes a decision that we can see is fundamentally wrong, we also have an obligation to say what’s really happening.

“Our members have been left to pick up the pieces. They are very much at breaking point. They are in survival mode trying to get through this peak now and i anticipate that they will be keen to take action the moment that they can come up for air.”

The impact on the health system became immediately clear, with emergency wait times and ambulance times ballooning as more and more people were diagnosed with COVID-19 and the PCR system capitulated.

The Omicron variant has been distinctly different from Delta, Ms Candish suggests.

“We very quickly saw a whole lot of COVID wards stood up in most of the hospitals. When we compare that to the Delta outbreak, we had a really clear process around which hospitals would have COVID patients and which wouldn’t, this kind of separation and concept of red hospitals or green hospitals. But very quickly, that process wasn’t able to be followed because of the volume of patients requiring admission.

“In the height of Delta, I think we saw big hospitals like Westmead, stand up maybe six or seven COVID wards over the space of a few months, and they were doing the same thing in a week and a half [with Omicron]. So it was just this mass requirement to find places to put patients and they were doing that at the same time we were seeing unprecedented numbers of furloughed staff because they also were exposed to the same levels of community transmission. Even now were seeing up to 5,000 staff that are isolating, so the ability of the health system to be able to find workers to resource the additional wards and the additional incoming patients has been a challenge really for the past six weeks.”

She says most emergency departments are reporting working double shifts most days in order to cope with the influx of patients presenting. ICU remains constantly busy in the face of significant numbers of staff being furloughed. 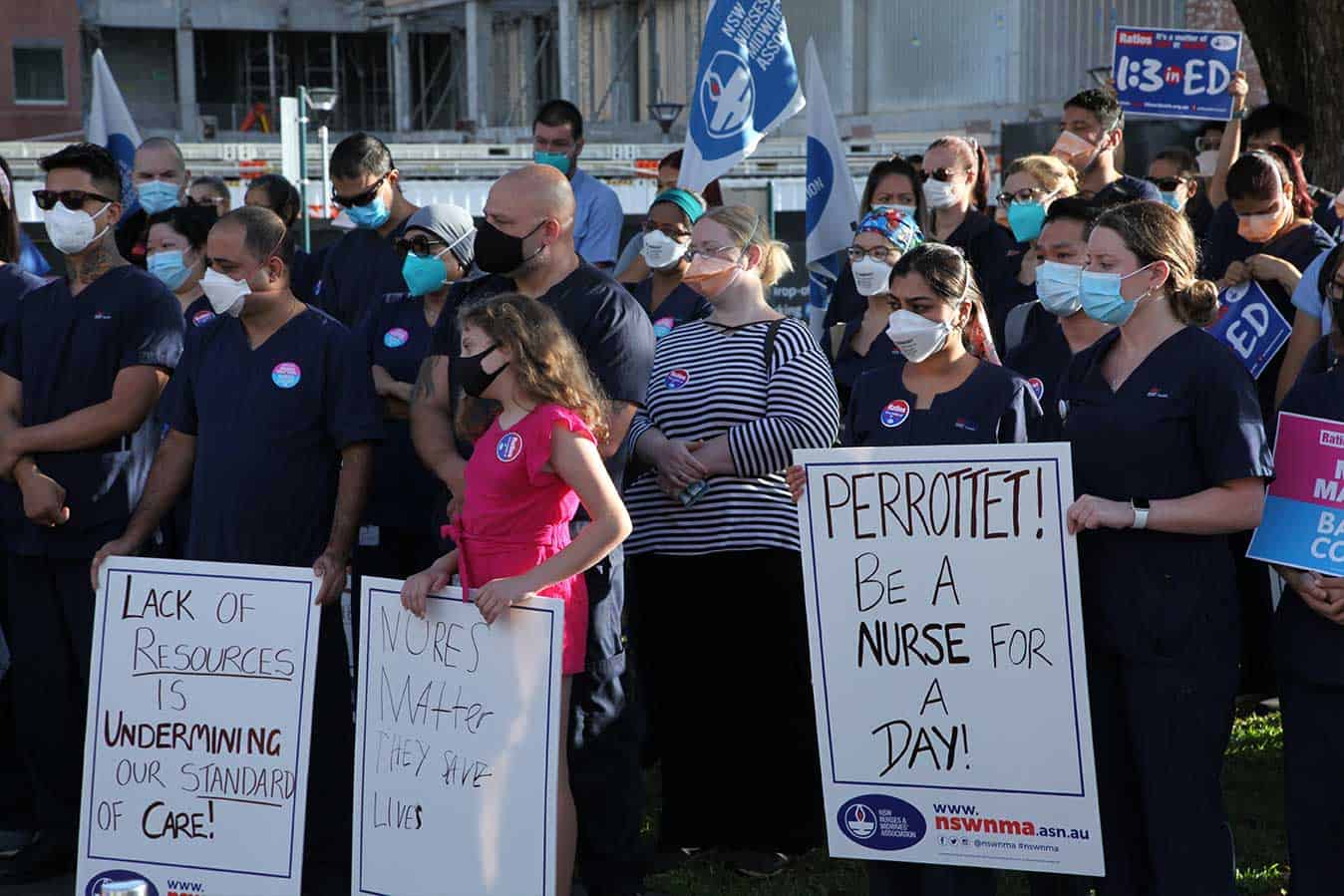 “For example, Westmead last week took protest action, Liverpool took protest action today [Thursday] and they’re seeing 25 to 27 patients a day that are ICU admissions but they’re trying to do that with the level of staff that they would normally have for 15 patients. It’s incredibly challenging for them to deliver the level of care that those patients need.”

The embattled aged care sector is also facing its own set of challenges, including a lack of access to RATs and enough staff with the right set of skills to maintain quality infection control procedures.

NSW aged care homes have reported hundreds of deaths during the Omicron surge and are reportedly being told by health authorities to manage their own outbreaks.

“NSW is probably experiencing some of the worst transmission through aged care, particularly because we have a really privatised system here. We have very few state-run aged care facilities and over the Christmas period, those facilities saw the same challenges in terms of community spread, which put many of their workers into isolation. And so a lot of the residents were really struggling to access the care they needed, even to have meals and just generally being hydrated, because there aren’t enough staff on shift to be able to do those absolute basic activities of daily living for those residents.”

“In a lot of those aged care facilities, they’re not able to maintain that very distinct separation,” Ms Candish adds.

“So we have residents that are being treated by staff working across the whole facility. That means that they are caring for patients who have COVID and also patients that don’t have COVID. Concepts around infection control have to be so robust and aged care just doesn’t have the resources to be able to do that. Unfortunately, we’re seeing COVID spread through aged care like wildfire and the federal government’s nowhere to be seen.”

While the narrative from governments suggests the Omicron peak has likely passed, Ms Candish says life for nurses and midwives on the frontline remains much the same.

“I think the worst probably is here now and we’re seeing more of a stabilisation of numbers,” Ms Candish says.

“We haven’t seen any drop off at all, and were seeing pretty substantial deaths, between 15 and 30 deaths per day at the moment, which is pretty significant.”

She says the variant has presented different types of pressure to Delta, typified by huge volumes of patients that are less severely unwell this time around.

Most importantly, Ms Candish says the pandemic has exposed longstanding staffing shortages like never before.

The NSWNMA is calling on the government to take immediate steps to alleviate the pressures on hospitals, including a COVID-19 allowance for healthcare workers and allowing nurses and midwives to access special leave when COVID-19 positive.

Their biggest push remains seeking the implementation of shift-by-shift ratios to ensure staffing levels, and bringing NSW into line with Victoria and Queensland.

“Right now, we’re calling on the government to provide a COVID payment to members that gives some recognition of the difficult conditions they’re working within and to also commit to nurse-to-patient ratios,” Ms Candish says.

“We need to have some hope that there’s going to be some improvement in this sector. We’re seeing mass resignations from people who are approaching retirement years and this sector can’t afford to lose a single nurse or midwife.”

With nurses, midwives and care workers currently in the fight of their lives, Ms Candish praised their tireless efforts but encouraged them to prioritise their own safety in the months ahead.

“I think they have to do everything they can to keep themselves safe,” she advises.

“The reality is that they’re no use to anyone, their patients or their families, if they’re not well themselves. Picking up that extra overtime shift or staying back or doing that extra day might be what their colleagues need but if we don’t start to draw some line somewhere we are going see really lengthy health decline for our members in the range of PTSD for some of them, because of what they’ve been through. My advice to members is to do everything they can to keep themselves well first because that has to be their priority.”