A new plaque mounted at the rear of Victoria’s Memorial to Nurses will help remind the broader public of the significance of the Australian Nurses Memorial Centre’s (ANMC) work, according to its president.

Funded by the State Government, the new plaque was unveiled by Shaun Leane, Victoria’s Minister for Veterans, last Thursday (25 February), at the statue’s longstanding home along St Kilda Road, the site of the Fawkner Towers.

ANMC President Arlene Bennett observed that while the organisation doesn’t look the same as it did 71 years ago — the ANMC’s headquarters are now located in an office space on the Towers’ ground floor instead of the Madowla house that once hosted regular events — its sense of purpose remains as strong as ever.

“We now only own a small piece of 431 St Kilda Road, but the spirit of the centre lives on,” Ms Bennett said, noting that the Memorial Centre honours Australian nurses across “every conflict”, including those working as peacekeepers and in humanitarian aid. 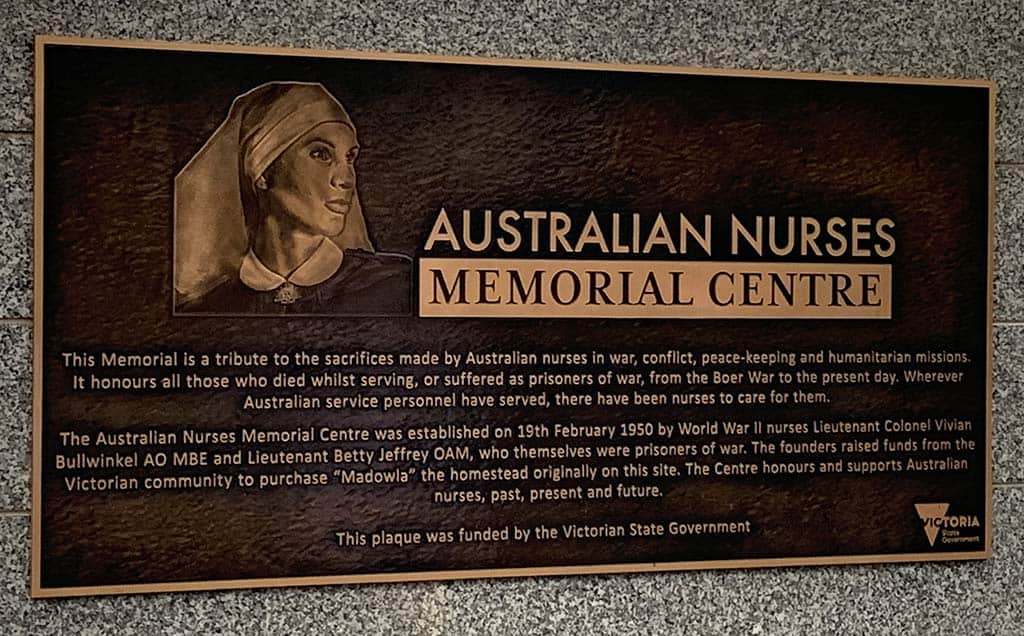 The new plaque produced for the statue. Photo: ANMJ

“As we read the other side of this memorial, it states, ‘May they kindle in your hearts a torch whose flame shall be eternal.’

“It most definitely has done that in the past, and it will continue [to do so] well into the future.”

Minister Leane, who used his address to reflect on the role of nursing in his upbringing (his mother was a nurse), was quick to pay tribute to the organisation.

“I just think the work that you’ve done is so admirable,” the Minister said.

“Anything I can do with future endeavours, along with the Victoria Veterans Council and others, please ask.”

The event’s final speaker, Robert Malone, a nephew of ANMC co-founder Betty Jeffrey, used his speech, which drew significantly from words written by his daughter Emily Malone, who was unable to attend Thursday’s unveiling, to specifically tie the current legacy of the ANMC to his aunt’s legacy.

“Aunty Bet, I hope that as you look upon us and the centre today, you are comforted to know that the Australian Nurses Memorial Centre is in good hands,” Mr Malone said, quoting a passage of speech written by his daughter.

“[I hope you know] that it is loved and appreciated by many members of the nursing world, that it continues to make a contribution to the nursing profession in Australia, and that you and the nurses are not forgotten.

“Your story lives on and I couldn’t be prouder to tell it.”

The unveiling of the new plaque was initially scheduled for Friday, 19 February, marking the 71st Anniversary of the ANMC.

However, due to complications created by Melbourne’s snap lockdown in the wake of the Holiday Inn cluster of COVID-19 cases, it was pushed back to the eventual date of 25 February.

More information on the Australian Nurses Memorial Centre and their work can be found here.