Midwife to AFLW star: The rise of Daisy Pearce

As the lone girl in a team of boys, a young Daisy Pearce always stood out.

Only it wasn’t her gender turning heads but rather an instinctive and canny ability to find the football that in years to come would see her widely regarded as one of the best players of her generation.

Born into a footy-mad household, Daisy grew up in the Victorian country town of Bright, where her Dad coached the junior footy team.

Her handful of brothers played the game and Daisy would always tag along to training and join in on drills.

About age 11, after years of persistence, she finally negotiated her way into pulling on the boots.

Daisy describes the local footy club as one typically found in most country towns: the heartbeat of the community. Fitting into the team was mostly trouble-free.

“Because I’d been around the footy club for so long I was just part of the furniture and they didn’t think any differently of me within the team and the club,” she recalls.

“Occasionally I did get a bit of sledging and carry on when I played against other teams but it wouldn’t usually last long. It’s a bit of a small country league and everyone knew that Bright had a girl called Daisy that played for them so it just became pretty normal.”

Daisy doesn’t remember being a child prodigy but, instead, a hard-working forward who kept plugging away, and, importantly, kept getting better.

Her modesty disguises the beginnings of a legitimate star; a teenager so talented she topped the club’s goal-kicking.

“A lot of the boys took a little bit longer to develop than I did so I got a bit of a jump start on them,” she jokes of her feats in front of the big sticks.

When she was 14, Daisy moved to Melbourne to live with her mother, giving up football altogether. She was unaware a women’s league existed, and resigned to a world in which women don’t play footy.

At Eltham High School, Daisy switched her hand to volleyball, a sport she was so adept at that she represented Victoria.

One day, while playing school footy, she found out about the Victorian Women’s Football League.

She was 1, and had spent two years out of the game, but instantly realised the pathway ahead.

Daisy resumed playing league footy in 2005 with the Darebin Falcons, whom she would help to become an all-conquering force over the next decade.

“I love that you have to rely on the diversity of everyone [in the team],” she says of her love for Australia’s native game.

“It’s exciting having 21 teammates that you rely on, and to try and achieve goals as a team is something I really enjoy. The nature of footy means there are so many different shapes and sizes and different types of people, and it makes it really interesting all the time.”

Daisy’s achievements as a player have grown in unison with the mainstream emergence of the women’s game itself. 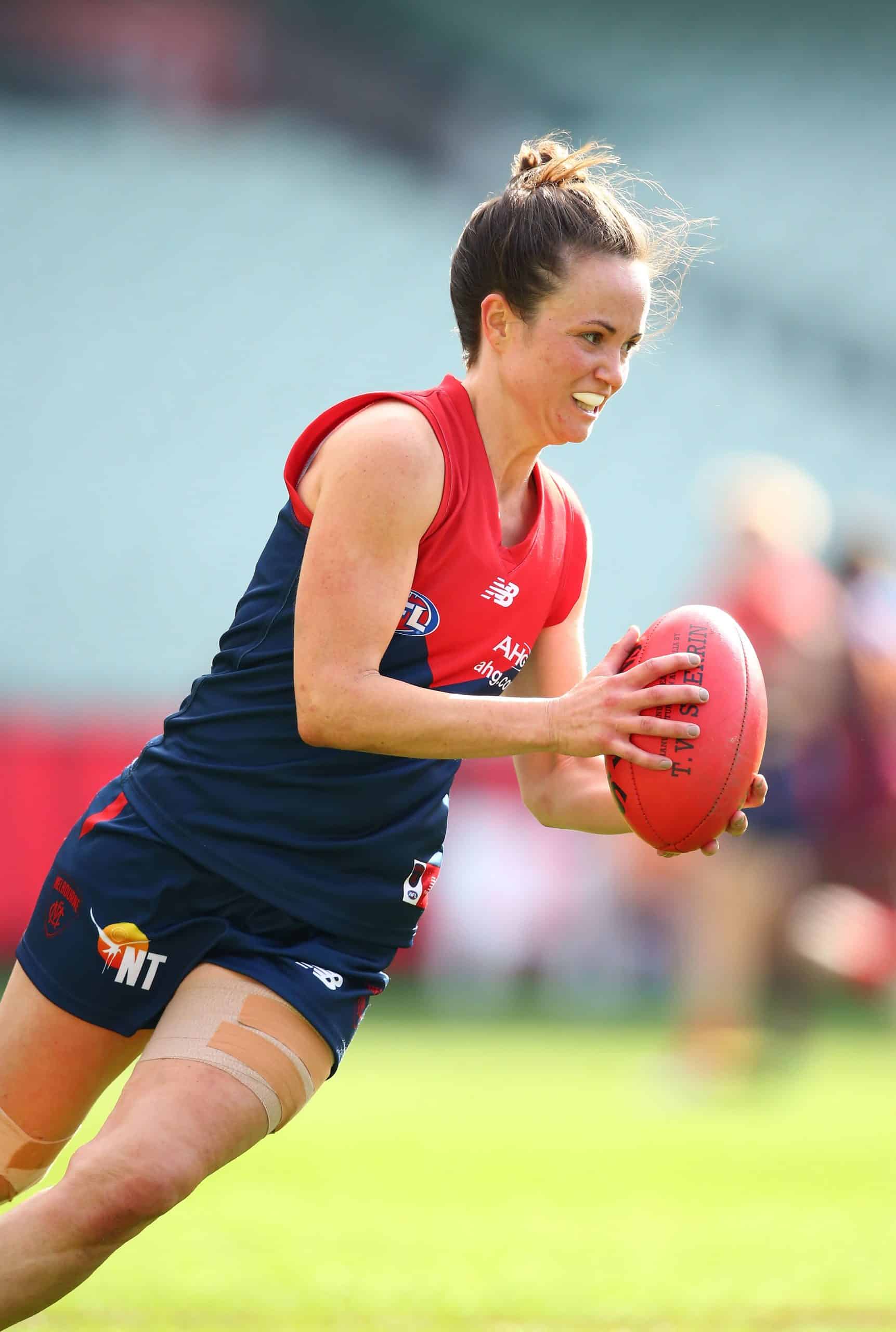 In a landmark year in which the AFL is launching its new women’s league – where the tenacious midfielder will captain the newly formed Melbourne Women’s Football Club – Daisy reflects on a day she thought might never come.

“I grew up dreaming of playing in the AFL but once you hit the age of about 11 or 12 your heart gets broken because you realise all your heroes are boys and it’s not going to happen,” she says.

The now 28-year-old says the prospect of an AFL women’s league has only recently appeared attainable.

“It’s a huge shift for football but also for society that females are going to be able to play this game on the big stage in televised matches,” she says.

On a personal level, with her biggest pre-season ever under the belt and newfound access to elite facilities and coaching, Daisy is visibly eager to test her already impressive skills against the competition’s elite.

While unsure of her time left in the game, she expects to be playing for at least several more years.

“Now we’re in an environment where there’s four or five coaches, plus all your strength and conditioning staff and all these resources around you that are there to make you better as an individual and improve the team. I feel like I’m improving every time I hit the track.”

While football will always be Daisy’s first love, midwifery, too, holds a special place in her heart. It’s a career she continues alongside her burgeoning sporting commitments and media career.

After finishing high school, Daisy completed a double degree in Nursing and Midwifery at La Trobe University, then undertook her graduate year at Box Hill Hospital in 2001, where she has remained a fixture since.

At the beginning of 2016, as football was starting to take off, she put midwifery on hold and started working at the Melbourne Football Club, where she currently holds a welfare and development role.

“It wasn’t an easy decision to walk away from it because it was a job that I really loved,” she says.

“I reckon I’ll definitely come back to it at some point and I’m working pretty hard to make sure I keep all my CPD hours up and my registration up so that it’s an option later on.”

Daisy had always wanted to work in healthcare and became captivated by midwifery during the period her mother gave birth to her younger brothers.

“I was always very fascinated and loved the cycle of pregnancy and when she had her babies and being involved in all that. So that is probably where the initial passion came from. Hearing her speak so glowingly of all her midwives probably planted the seed.”

Daisy describes being a midwife as rewarding and a privilege.

“It can be tough at times but it’s a really rewarding and privileged moment that you get to share with people. It’s a funny thing that at times you only meet people the day before or that day that they come to have their baby but to share that moment with them and be there to help guide them through that moment is really special. It does create a real connection that is almost addictive.”

Daisy says she misses the camaraderie of work colleagues the most and helping people through one of the toughest and most beautiful moments of their lives.

True to her word, she was back at Box Hill Hospital in the New Year to take on a shift.

Asked if she is a better footballer or midwife, Daisy chuckles and says she hopes it’s the latter because in football you can stuff up a pass and get away with it whereas midwifery demands unwavering efficiency.

“Once the football career is over I can certainly see myself doing it [midwifery] long-term once I get a bit older. For now, I’m just keeping all my options open for as long as I can and seeing where it takes me.”

In a couple of years, Daisy has gone from a relative unknown to a household name and pin-up for women’s footy.

The new AFLW league kicked off in February with an eight team competition that features six home-and-away rounds, plus finals, culminating with the Grand Final on March 25.

Despite overnight fame proving at times challenging and exhausting, Daisy appears happy to embrace her new status as a role model who’d love to attract more girls to play football.

“To see people start to take notice of female footballers and all female sport is exciting,” she says.

“It’s pretty strange at times to be at the forefront of that but I’m taking it in my stride and doing the best I can. It’s certainly different when you go down to the supermarket and people say hello to you and that kind of thing. I used to able to go down there and sneak in and sneak out with no one really caring. That’s something you don’t think of until it gets taken away.”