Key takeaways from the Jobs and Skills Summit

When former Prime Minister Bob Hawke held his economic summit in 1983, of the 97 participants, just one was a woman. Nearly four decades on, in an illustration of how far things have come, half of the delegates at last week’s Jobs and Skills Summit at Parliament House in Canberra were female.

Led by Prime Minister Anthony Albanese, the summit brought together prominent leaders from across Australia including politicians, unions, employers, civil society and governments to discuss a range of shared economic and workforce challenges amid rising inflation and interest rates, falling wages, and $1 trillion of national debt.

More than 100 roundtables were held in the lead-up to the summit, including a specific aged care workforce meeting that undertook to push for better job security, pay and conditions for the workforce, making aged care a more attractive place to work, and improving training and skills.

Aiming to generate ideas and consensus to help shape the future of Australia’s labour market, topics on the agenda at the Jobs and Skills Summit included securing well-paid jobs and sustainable wages growth, addressing the national skills shortage, increasing the participation of women in the workforce, maximising jobs from the care economy, equal opportunities and pay for women, boosting productivity, modernising the collective bargaining system, and tackling climate change.

ANMF Federal Secretary Annie Butler, one of 140 people who attended the summit, featured on a panel discussion examining the role of skilled migration in resolving the current skills and labour shortages crisis. Later, the subject would form one of 36 immediate initiatives the federal government has pledged to implement, with Australia’s permanent migration cap set to increase from 160,000 to 195,000 in 2022-23 to help ease critical skills shortages.

“It was a privilege to have a seat at the table representing the largest national union in Australia,” Ms Butler said. 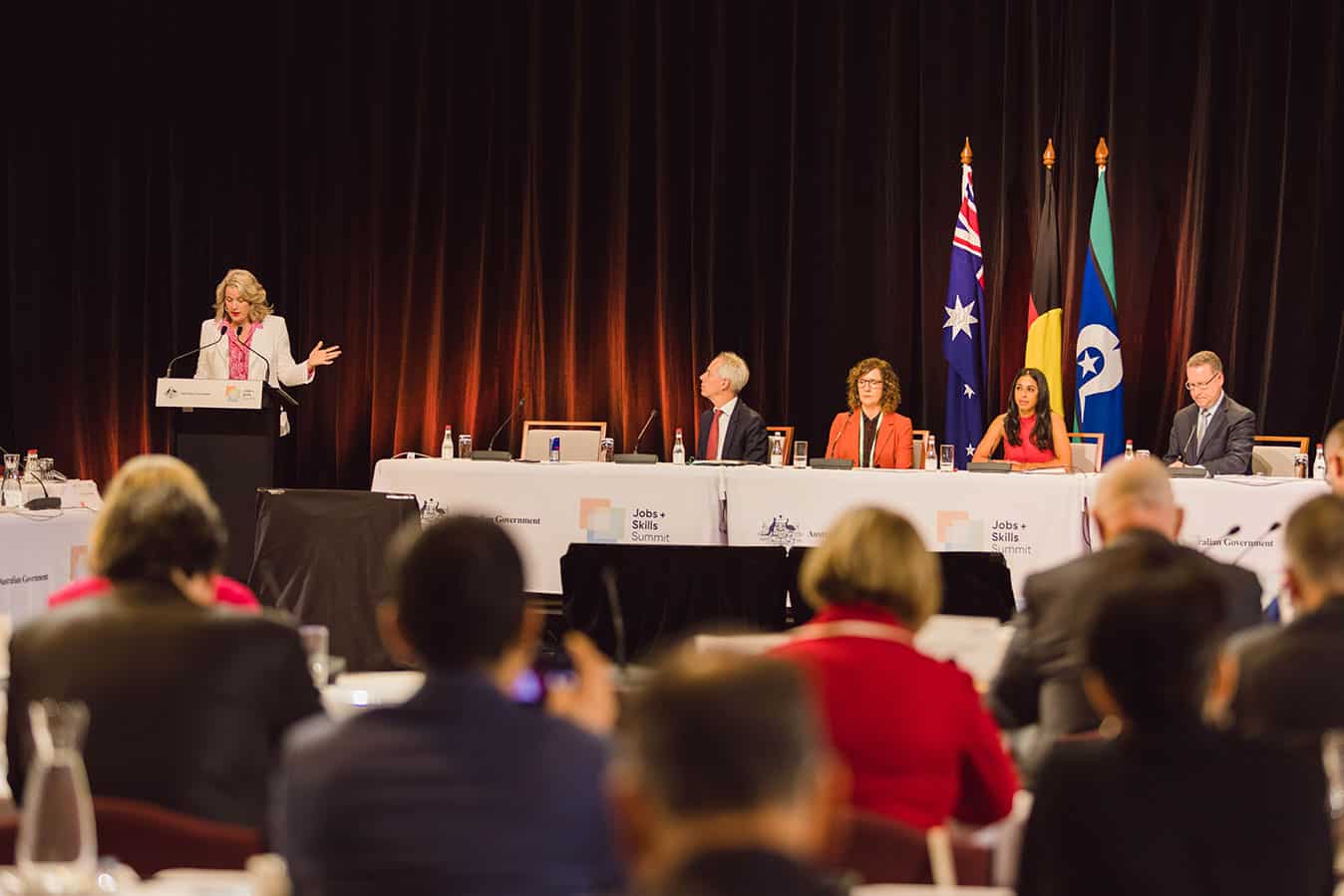 “After a decade of neglect across a range of sectors, the Jobs and Skills Summit brought together leaders from all walks of life to reach consensus and drive reform to create more opportunities for Australians, especially women and highly feminised industries, such as aged care.”

At the close of the summit, the government released 36 key outcomes central to its economic agenda moving forward. They include:

The outcomes will now inform the Employment White Paper, which will begin accepting submissions later this month, and further shape the government’s plans.

Ms Butler welcomed the summit’s focus on key issues relevant to ANMF members, including equal opportunities and pay for women and supporting women’s increased participation in the workforce.

During the summit, a coalition of aged care groups used their platform to release a set of shared aims to improve the sector, including ensuring quality care for all older Australians, implementing any decision from the Fair Work Commission’s Aged Care Work Value case to introduce better remuneration for aged care workers, and identifying and promoting more attractive career pathways.

Changes to enterprise bargaining was also front and centre at the summit, particularly efforts to improve the care economy, which contributes a significant amount to the nation’s growth and prosperity.

“It’s undervalued and has been consistently under-recognised, so it was really important to bring that to light,” Ms Butler said.

“While there is now a better pathway to recognising its contribution, the hard work from here is drafting legislation that is going to put in place the structures that will enable workers across the care economy and healthcare sector to actually achieve better wages and conditions.”

“Australia needs sustainable pay increases so that working people’s pay keeps up with the cost of living and productivity increases,” Ms McManus said.

“We also want the work of people like healthcare workers, aged care workers and teachers to be properly respected and valued.

“For this to occur we need to modernise the collective bargaining system. We must have a system that is simple, fair and accessible and does the job of getting wages moving.”

An increase in the permanent Migration Ceiling to 195,000 in 2022-23 was another outcome that will have an effect on nursing and midwifery. As part of this, $36.1 million in additional funding will be used to accelerate visa processing and resolve the backlog, while recent graduates with select degrees in areas that have skill shortages will have their post-study work rights boosted and now be allowed two additional years of stay.

Home Affairs Minister Claire O’Neil said the move could pave the way for thousands more nurses to settle in Australia.

“This means more nurses in our hospitals, more engineers to help build up our vital infrastructure and more tech experts for our high-tech businesses.”

Ms Butler said the ANMF supported the move, however, believed the government must ensure that the exploitation of migrants, common across some sectors, is addressed. It also needs to approach recruitment ethically to avoid compromising the health systems of less wealthy countries.

“We support the government’s focus on increased pathways to permanency and permanent migration has always been really valuable to our workforce,” Ms Butler explained.

“Importantly, what we want to see accompany this move is the removal of exploitation, particularly in sectors like aged care, as well as better pathways to permanency, security, and increased training.”

Ms Butler also welcomed the government’s pledge to legislate Jobs and Skills Australia as a priority based on tripartite governance, so that skills shortages can be independently determined.

“Currently, it’s the employer that determines where there’s a shortage of skills and we would argue that, too often, because employers aren’t required to advertise jobs that are good salaries or conditions, the issue is a pay shortage, not a skill shortage. That’s no more acutely seen than in aged care.”

Ultimately, Ms Butler described the jobs summit as a refreshing opportunity to reset and move forward.

“It’s marked out the government’s intentions regarding some high-level key areas of focus and we look forward to using our influence and voice to be a part of those reforms.”