How nurse practitioners are filling the gaps in aged care

An elderly woman living in residential aged care who had just returned from hospital after having her fractured hip repaired lay screaming in agony.

Carers did their best to assist but without an RN on site, appropriate pain relief was unable to be provided.

“There was no registered nurse to provide any pain relief. She screamed for eight hours. The next morning her family called me in such distress and asked me to come urgently. She obviously had a dislocated shoulder and she was in agony.”

Ms Samara, a nurse practitioner (NP) based in Canberra who works for Calvary Health Care’s Clare Holland House, is part of a team who developed an innovative model integrating specialist palliative care into residential aged care in a bid to give people more dignity and choice at end of life.

Addressing delegates, she said the aged care sector, likely the most reviewed area of public policy in Australia with countless Inquiries carried out over the past two decades, was struggling amid a growing level of complexity of care and widespread failings. 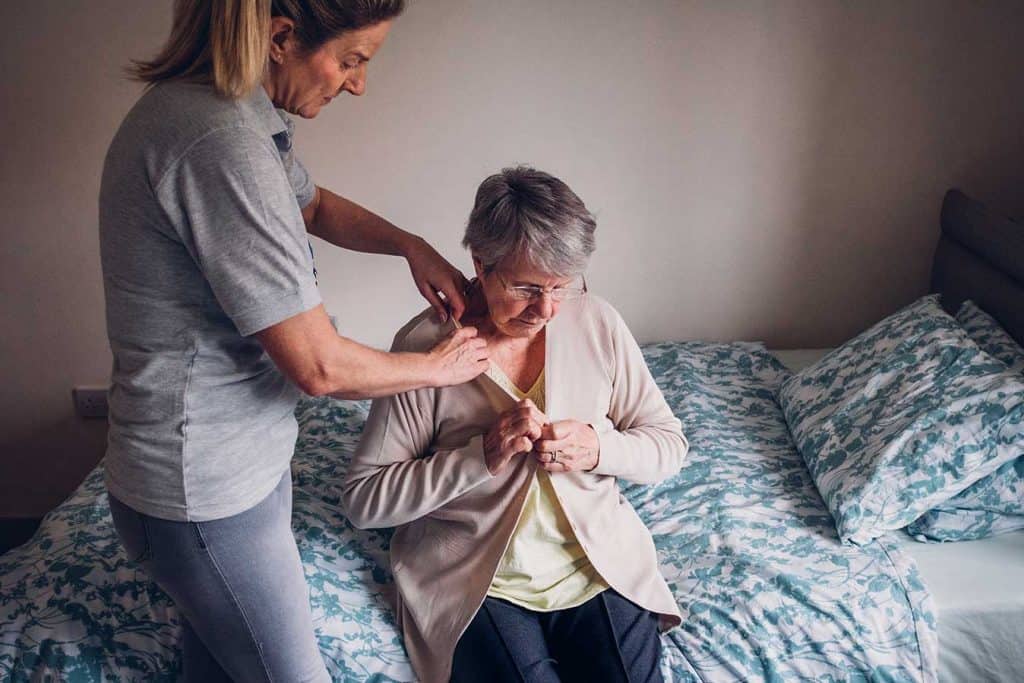 “Some of the issues are truly at a systems level,” Ms Samara explained.

“There’s a large number of untrained and unregulated carers in nursing taking on many aspects of personal and clinical care, including medication administration.

“Many facilities don’t even have a registered nurse on the premises 24 hours a day. The registered nurses are often new graduate nurses or overseas trained nurses, some of them in their very first nursing role. A lot of them have English as a second language and this creates barriers in communicating with families.”

Ms Samara said other shortcomings include the rising use of agency nurses and lack of continuity of care for residents, incomplete clinical records and poor documentation, and a reluctance among GPs to prescribe essential opioids.

Common complaints from residents and families about aged care include polypharmacy and over-prescribing, medication errors, difficulty sourcing medications, chemical restraint being used because of a lack of staff, residents and families being excluded from important decisions or not told of changes, and carers being allocated less than 10 minutes per resident to carry out bathing and oral hygiene.

“There are a lot of clinical problems over and on top of the chronic health conditions people have,” Ms Samara argued.

“Residents are entering aged care later in life and often in the last six months of life. They have multiple chronic illnesses, lots of comorbidity and complex health needs. Thirty-eight percent of them die within one year of admission and 27% die within six months of admission. Our aged care facilities are actually sub-acute hospitals.”

In 2014, fellow NP Nikki Johnston established the INSPIRED: Integrating specialist palliative care into residential care for older people project to improve the manner in which people die in aged care.

Ms Samara later joined the team in an NP role funded by the trial.

“There are so many barriers to a good death in aged care,” she told delegates.

“The advance care plans are often incomplete or outdated. They’re inappropriate for the current clinical status. They often don’t state the preferred place of death. They’re often completed by family members with no input from health professionals.”

“There are huge knowledge gaps largely due to the untrained workforce. Dying is definitely not recognised, it’s not normalised and it’s not planned for. Death is medicalised.”

The INSPIRED project led to the development of a program called Palliative Care Needs Rounds in 2015, involving hour-long monthly education sessions with staff at four nursing homes initially in a bid to enhance their knowledge about what dying looks like and identifying residents at risk to ensure they had proper plans in place.

Results from the pilot showed a reduction in hospital stay by 67% and people died in their preferred place 100% of the time.

Following the pilot, the INSPIRED trial was funded by the ACT Government and a randomised controlled stepped wedge trial integrating Palliative Care Needs Rounds commenced in 2017 across 12 residential aged care facilities in Canberra caring for 1,700 residents.

“Our focus is on sharing knowledge, building capacity and empowering staff to provide the care that their residents need,” Ms Samara said.

“The results of the INSPIRED trial show that Palliative Care Needs Rounds has been proven to reduce length of stay in hospital and significantly reduce the overall number of hospital admissions, providing substantial cost savings to the ACT government over 18 months.”

“The staff at most facilities said they learnt more about disease trajectories, the risks and burdens of hospitalisations, and felt they were more able to support residents in the facilities and prevent unnecessary admissions,” Ms Samara added.

“They said the Needs Rounds led to better anticipatory care planning, including the prescribing and accessing of appropriate medications and that they improved the residents’ ability to die in their preferred place.”

Ms Samara said the successful project illustrates the impact nurse practitioners can make in filling the gaps in aged care.

NPs can undertake more comprehensive assessments than other nurses, provide a higher level of care and organise diagnostic tests or appropriate medicines leading to more timely treatment and improved health outcomes, she said.

“We believe our work has been successful because of our approach to integrating our specialist palliative care service into the facilities. We are not consultants. We’re not delivering a project that has an end date. We’re not just applying a Band-Aid. We’re recognised and valued as part of the team in all of the facilities we visit.”

Ms Samara said the team was optimistic that the innovative model of care could be extended nationally so more people can benefit.

She said while the current Aged Care Royal Commission would hopefully make recommendations to address the sector’s issues, health professionals on the frontline couldn’t afford to wait until then.

“We have to do our best to improve the care of our most vulnerable and neglected members of society and we have to do it now,” she declared.

“We’ve proved that nurse practitioners can make a huge difference when integrated into residential aged care. The results of the INSPIRED trial have shown the Needs Round model works and that it should be implemented without delay.

“We don’t know if it will work in other states or territories or internationally or with other clinicians. But we’re now planning an implementation study to see if we can replicate it. We don’t aim to have all the answers, there’s still a long way to go. But at least we’ve made a start, we’re filling the gaps and we are making a difference.”