Green crusader and anaesthetic nurse Darren Bradbrook has been on a sustainability campaign in the operating room at Flinders Medical Centre (FMC) in South Australia since 2017. As a result, FMC has diverted over 60–70% of its operating room waste from landfill to a number of renewable streams in just over 18 months.

“I was getting fed up with opening packaging from companies who had a one size fits all motto. With the volume of waste each day we use that goes to landfill

I thought we have got to have a better solution to our problem. What can we do ourselves?” says Darren, an anaesthetic nurse of 21 years.

So in early 2017, Darren embarked on a project to make the operating theatres a greener place to work.

“It all started with me contacting the key accounts manager for waste that services the SA public sector. We met one day to discuss some diversion from landfill options with me giving her samples of the kinds of products that we were aiming to have a solution with.”

As the second largest hospital in the public sector in Adelaide, Darren says it was imperative that any sustainability initiative couldn’t add too heavily to the existing workload of staff.

“We have 350 people in SALHN perioperative and it couldn’t impact too heavily on them. PVC recycling was being done in hospitals in Victoria and New South Wales, the structure was already established, we were tapping into an existing framework.

It was cost neutral to us which was a massive drawcard.

“After a few months of negotiations, we finally decided on a twin stream for the products which was both high and low grade plastic waste. We had posters made up and bins (240ltr) were ordered with specific coloured lids and signage to make them identifiable to the people collecting. 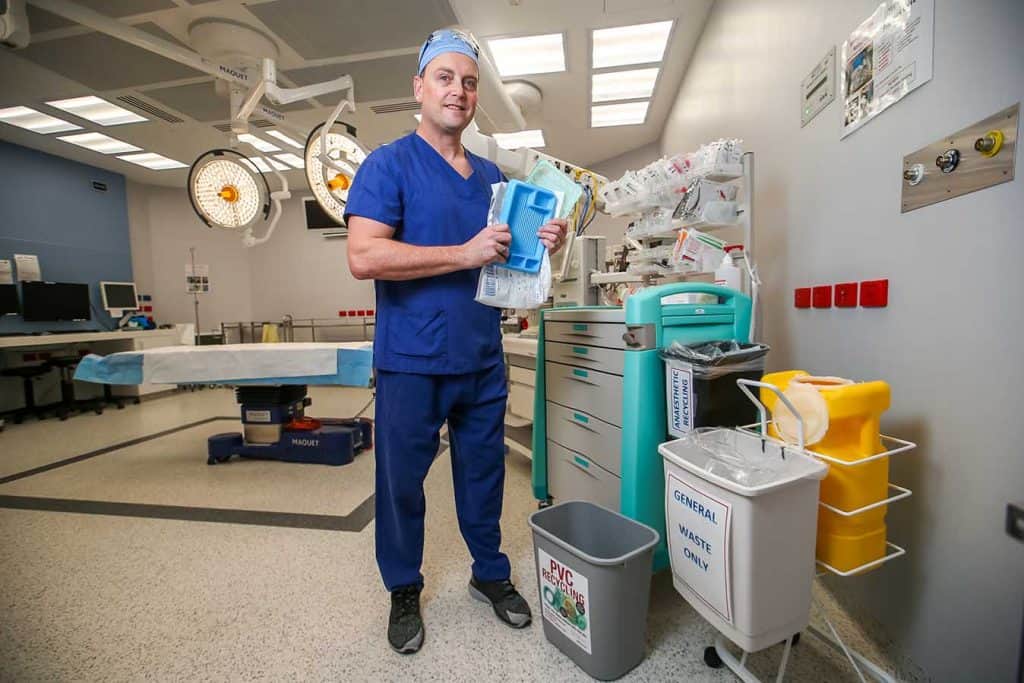 PVC (poly vinyl chloride) which mostly consisted of IV fluid bags, Hudson masks and oxygen tubing. This stream however was with another waste contractor so I engaged them in conversations which eventually led to us also participating in a PVC and aluminium recycling program independent but simultaneously with the plastic streams.”

Over the next few months FMC introduced the system in the main operating theatres, starting with PVC and then rolling to the larger stream being plastics.

“We were the first hospital in South Australia to do PVC recycling. We started in PACU (recovery) first, as this space was smaller and staff compliance was always going to be simpler as educating this group traditionally was easier,” says Darren.

Education and promotion included inservicing, and lots of visual aids such as posters.

“We started to explain to people the ‘why’ and to strongly empower and encourage everyone to be part of this change – that this was an important part of our practice and that we could easily achieve this. People gained some knowledge of just how much waste our department produces, where it goes, and what our impact was locally and globally.

“We did a pilot in recovery and staff really grabbed on to it with both hands. People could see the benefit as an organisation, department, and community in how we deal with huge volumes of clean rubbish.”

After enormous success in PACU and after many education sessions, FMC theatres introduced the plastic streams. FMC was the first hospital in the public sector to be recycling low and high grade plastics with SUEZ ResourceCo and PVC and Aluminium with Veolia/Baxter Healthcare, says Darren.

“This process went quite smoothly, however we worked out very quickly that we were going to need a lot more bins as the volumes were enormous.”

All plastics are made into a renewable fuel source used by local industry in SA, such as Adelaide Brighton Cement. The plastics are chipped and compressed into bricks to be used as a Processed Engineered Fuel (PEF) which has a significant calorific value in the production of cement, reducing the use of fossil fuels by approximately 30%.

Clean Energy Regulator under the Emissions Reduction Fund, so we know this means the fuel source is being closely watched to ensure it complies with all local and state emission control policy,” Darren says.

News began to spread rapidly about what was being achieved in the FMC operating theatre, and the department was being contacted by other departments to follow suit. A FMC Green Team, which holds monthly meetings, was subsequently formed in late 2017 to help spread the success to other areas. The Green Team initially consisted of three members and today has over 25 representatives from approximately 18 different departments within SALHN (Southern Adelaide Local

“Before long, theatres at FMC had a 2/3 diversion rate from landfill to recyclables, meaning that the general waste had been diverted by up to 70% to a renewable/ recyclable stream, with a potential significant cost saving,” says Darren.

Darren became an addition to FMC’s Waste Committee, to tap into existing processes, and was liaising with senior corporate services and nursing managers in SA Health.

“I am extremely proud that this is a nurse-led initiative; that we are not just about caring about people. It’s about us locally as well as globally and how we impact our own communities sustainably for better outcomes for future generations.”

The results have been nothing short of amazing, says Darren proudly.

Since November 2018, FMC doubled its volume of waste diversion compared to 2017, reflecting the support from those who have joined in the war against waste.

“We have diverted over 60–70% of our operating room waste from landfill in a number of streams. PVC, aluminium, low and high grade plastics, single use metal instruments, paper/cardboard etc. We now proudly recycle all of these items as well as printer cartridges and E-waste.”

Such has been the success and engagement of the sustainability initiative at FMC, it has potential to become a whole of health strategy, says Darren.

“We are now in approximately 15 departments within SALHN, and hope to be the first hospital organisation-wide to be participating in making SALHN a green and sustainable place to work.”

Darren says the vision is to achieve zero waste. “We want to move away from rubbish and as close to zero waste as we can as an organisation. We now ask product companies if they recycle or renew and toprovide information on that. I am up front: if they say they don’t, I say we are probably not interested in the product. When future tenders expire, new partnerships will include moving towards products which can have a second life in a recyclable stream, holding companies to account.”

Darren has also been busy spreading the message of sustainability. He featured in a Channel 10 news segment in late 2018 showcasing the work being done at FMC, also in a national waste magazine (Waste Management Review) and has presented locally and at conferences. He is currently working on a combined media strategy with SA Health and Baxter Healthcare hoping to take place in the next couple of months; and is also eager to present at the next ACORN conference held in Sydney.

“We simply have to spread the word of sustainability in health as far and wide as possible. The results speak for themselves.”