ANMF call to action: aged care can no longer wait

The explosive report which described Australia’s aged care system as “shameful” and “woefully inadequate” came as no surprise to the union which is ramping up its campaign for safer staffing in aged care.

The Prime Minister and the Minister for Aged Care expressed shock on receiving the damming report.

“How dare these politicians turn around now and say they didn’t know. Aged care nurses and carers have been telling politicians about the problems in the sector for years – they have been crying out for change and have worked themselves to the bone holding the system together while trying to get governments and industry to listen,” ANMF Federal Secretary Annie Butler said.

Several key areas of concern were identified in the interim report, including that many of the cases of substandard care brought to light at the Royal Commission were well-known to both providers and the regulator.

“The combined impact of the evidence, submissions and stories provided to the Royal Commission leads us to conclude that substandard care is much more widespread and more serious than we had anticipated,” the Commissioners wrote.

While the report delivered no specific recommendations, three areas were identified for immediate action before the final report is due in November 2020.

A focus on extra home care packages for over 100,000 Australians on waiting lists; reducing the use of physical and chemical restraints on nursing home residents; and stopping younger people with a disability going into aged care facilities.

“The ANMF agrees those areas need urgent attention and action, but we don’t think the government should stop there – we can’t wait another year for action on other critical areas desperately needing reform,” Ms Butler said.

The report identified the need for fundamental reform including in areas of workforce, pay and conditions, and education and training.

“Australian taxpayers have every right to expect that a sector so heavily funded by them should be open and fully accountable to the public and seen as a ‘service’ to them.”

While the Commission’s interim report blamed governments, their departments, and industry for neglect of the elderly, it paid tribute to the aged care workforce trying to provide the best care they could in difficult circumstances, Ms Butler said.

“Most workers delivering care are doing their best in extremely trying circumstances where there are constraints on their time and on the resources available to them,” the report read.

It was now time for government, politicians and industry to act, Ms Butler said.

“The government must act on the need to introduce mandated minimum staffing levels and skills mix. The aged care workforce has held the system together for too long, workers can’t sustain their efforts much longer, action is needed now.” 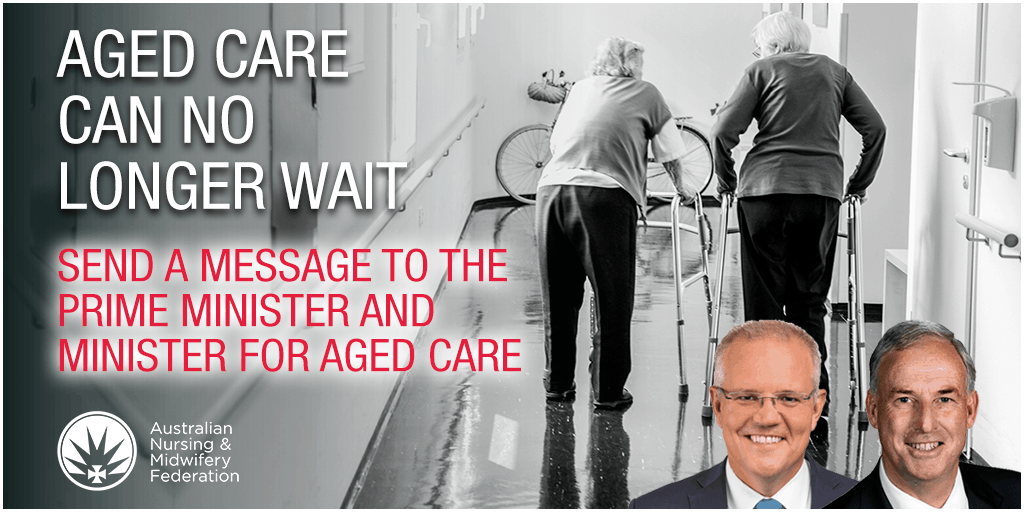 Ms Butler urged nurses and midwives to get on board.

“This time it feels like someone is really listening. It’s time to maintain the courage to expose the understaffing, profit making, and failures in care that we have been fighting to expose for over 12 years.

“Help us make them listen by sending an email message to the Prime Minister Scott Morrison and the Minister for Aged Care Richard Colbeck that aged care can no longer wait.”