Opposition leader Anthony Albanese has committed to implementing all recommendations set to be handed down at the conclusion of the Aged Care Royal Commission in November next year but stopped short of guaranteeing mandated ratios across the embattled sector.

Mr Albanese told delegates the nation couldn’t wait for the Royal Commission’s recommendations and that action needed to begin immediately, pledging that the Labor Party would continue to follow the Inquiry and raise its profile to “ensure there is so much pressure on the government that they have to act”.

“The government doesn’t have to wait for a Royal Commission to bring down its findings in order to take action. Some of the evidence is so clear already that they need to act,” Mr Albanese said.

“Aged care needs more staff. They need to be better trained. They need to be better paid. That’s how you attract skilled staff. Facilities need a nurse onsite 24-hours a day, 7 days a week. Personal care attendants should expect to have a minimum qualification of Certificate 3. We need greater transparency of how public money is spent in aged care.” 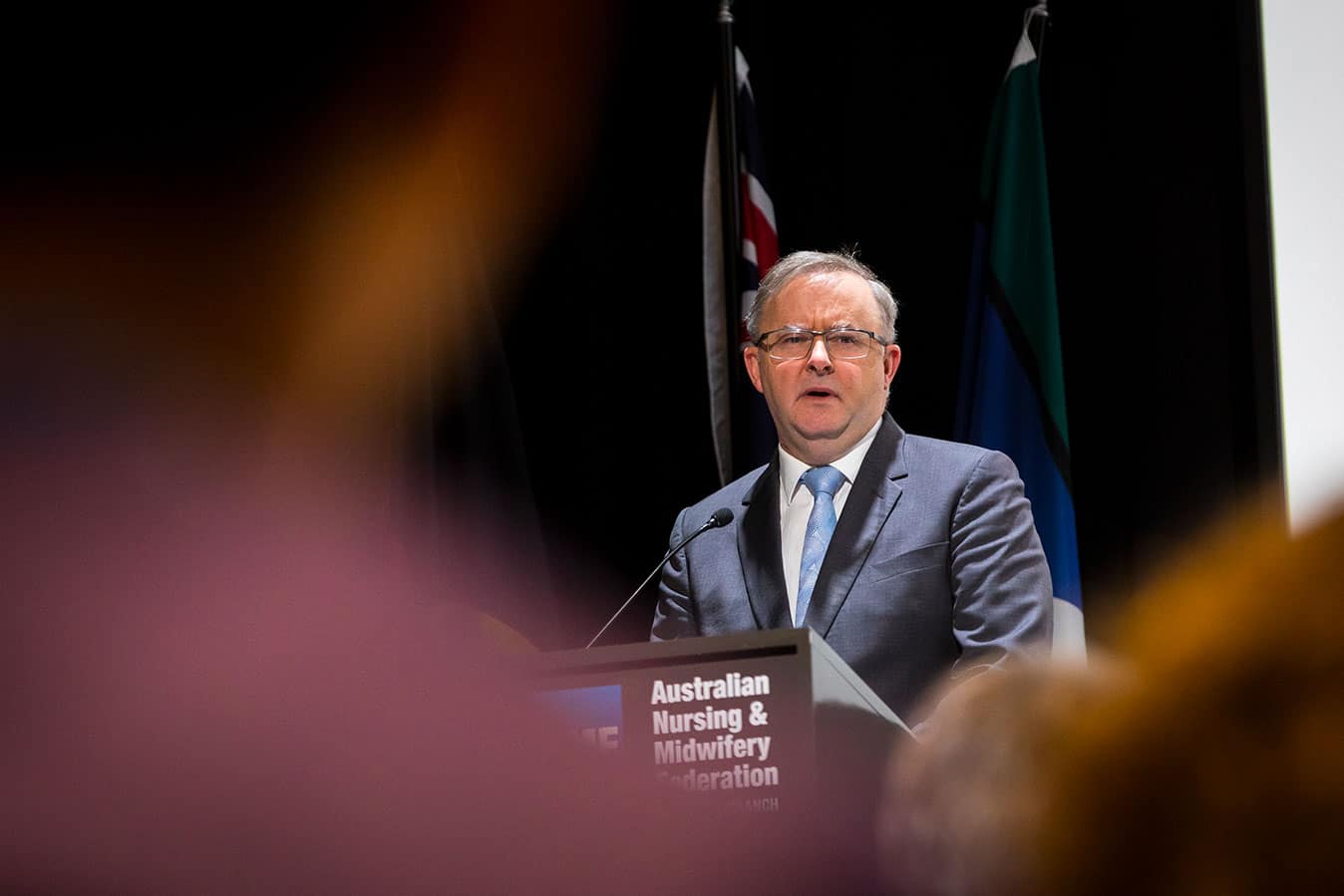 During question time, Mr Albanese, who earlier said aged care workers at the coalface were holding the system together, was pressed by delegates on whether the ALP would commit to mandated ratios in aged care in the lead up to the next federal election.

Importantly, Mr Albanese, Member for the Sydney electorate of Grayndler, pledged his support for mandated ratios in aged care and the ANMF’s national campaign, Ratios for Aged Care – Make Them Law Now, in September last year.

NSW delegate Jocelyn Hofman, a registered nurse working in the sector who often looks after up to 120 residents on a night shift, made an impassioned plea for better support so staff can provide quality care that elderly residents deserve.

“Given the exposure of the abuse in aged care, the chronic understaffing, the dangerous workloads [faced] by us nurses and carers and the failure of the quality agency to regulate this sector effectively, will you, should you win government, implement all the recommendations that will be handed down by the Royal Commission? Will you commit to mandating ratios in aged care?” Ms Hofman asked.

But while Mr Albanese promised to implement all of the Royal Commission’s recommendations, he sidestepped the subject of ratios, suggesting such a funding decision would require producing fully-costed policies.

“With regard to ratios as well, I hear you, I understand what you’re saying,” he told delegates.

“One of the things that we will do is have fully-costed policies going up to the election.

“I understand that if you’re in the circumstances in which you raise, [looking after] 120 people, many of them needing acute care, then the idea that you just have one guaranteed nursing staff is simply not good enough.

“We will have fully-costed policies. I’m not in a position to make funding decisions on the run here as Labor leader.”

Fellow NSW delegate Elizabeth McCall told the Opposition leader she is currently supervising final semester undergraduate students as they undertake their aged care placements and that the horrific staffing levels they are exposed to is contributing to many of them being turned off the complex and specialised area of nursing because it “seems too risky and too hard”.

She said nurse-to-resident ratios were paramount and that delegates expected Labor to support them at the next election.

“Truth is we didn’t commit to them at the last election,” Mr Albanese admitted.

“When I give a commitment to you it will count. It will be costed.

“I hear exactly what you’re saying but I’m sure this isn’t the end of the conversation this is just the beginning.”

Mr Albanese was questioned further by ANMF (Tasmanian Branch) Secretary Emily Shepherd, a mother of two young daughters, who queried why mandated ratios exist in childcare but the nation’s elderly are not afforded the same level of care.

“I know that when I leave my children at daycare every day that they will be well cared for, that they’re going to have their nutritional needs met, their nappies changed, they’re not going to sit in soiled nappies all day,” Ms Shepherd explained.

“That’s wonderful, but equally I loved my nan and she was in a residential aged care centre at the end of her days and it saddens me that a very independent woman at the age of 89 was not offered the same care that my daughters get when they attend daycare.

“For us nurses who work in residential aged care, the Royal Commission isn’t going to tell us anything that we don’t already know and what we have already told all of the political parties in the lead up to the election.”

Ms Shepherd told Mr Albanese a report by the Tax Justice Network Australia had showed that federal government funding was adequate to implement ratios and that the information regarding costings was available prior to the Royal Commission and the federal election.

Once again Mr Albanese evaded any firm commitment, claiming he was not privy to previous party processes and reiterating his stance on the need for proper democratic process and due diligence.

“I’m here to say what I will do is listen to you and I wasn’t privy to those processes that would have taken place. I’m just being honest with you.”