Before discussing pharmacodynamics in depth, it is important to define the term and distinguish this branch of pharmacology from the branch called pharmacokinetics.

Pharmacokinetics is the branch of pharmacology that studies the relationship between time and the concentration of a drug at various sites in the body, by measuring the absorption, distribution, metabolism, and excretion of the drug.

Pharmacodynamics studies the effects of a drug on the body by measuring drug binding to receptors and dose-response curves.

Knowledge of how drugs act on receptors will help you understand why and how drugs have particular effects on the body.

Receptors are molecular complexes within or on the surface of a cell that selectively bind specific substances, also referred to as ligands, and elicit a response on the cell or organism.

Upon administration, a single drug molecule can bind to a wide variety of biological molecules as it circulates throughout the body. In most cases, this binding does not produce any biological effect. However, if the binding of a drug to a biological molecule leads to an effect, the molecule is classified as a drug receptor. The majority of drug receptors are regulatory molecules, which also act as receptors for endogenous ligands such as hormones or neurotransmitters. Though several types of molecules may function as drug targets, most drug receptors are proteins.

There are four major types of receptors in the body:

Endogenous molecules and drugs can serve as receptor ligands. Ligands can be classified as agonists or antagonists, based on the biological effect they have on their corresponding receptor. Ligands can also be categorised based on their binding site on a target receptor, which can be the primary active site or a different region on the receptor called allosteric site.

Drugs may be agonists, which activate receptors.

Agonists are ligands that, upon binding to a receptor, evoke its activation.

Agonists can be divided into two classes, depending on the ability to activate the receptor.

Drugs may be antagonists, which prevent receptors from being activated.

Antagonists are ligands that, upon binding to a receptor, inhibit its activation. Once bound to the receptor, antagonists block the potential binding of endogenous agonists that would otherwise activate the receptor.

Antagonists can be divided into reversible and irreversible antagonists, depending on the way they interact with receptors.

Scientists and clinicians use mathematical models to describe a fundamental pharmacodynamics relationship when studying a drug – the relationship between the dose of the drug given to the patient and its effects in the body.

Methods used to quantify the relationships between dose, response, and receptor binding include:

Understanding quantification methods will help you better describe the pharmacodynamics properties of drugs.

Several abbreviations are commonly used when describing a dose-response curve: 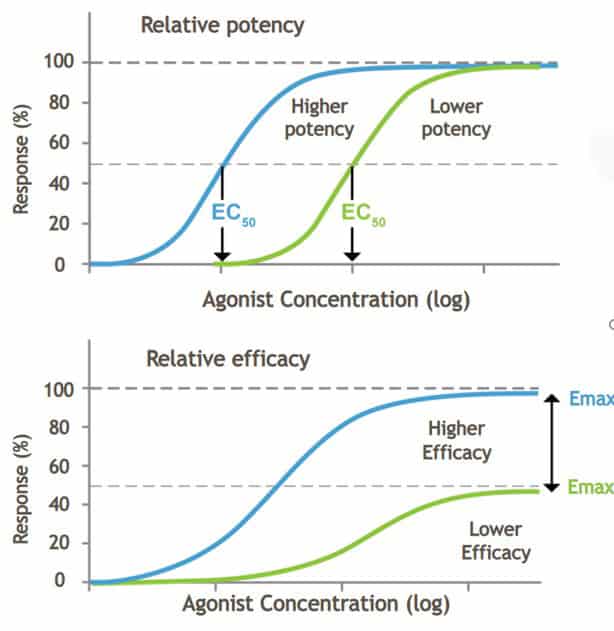 The property that quantifies binding strength is known as affinity. It is often measured using the equilibrium dissociation constant (KD).

Although quantitative methods are key tools for understanding the fundamental relationships in pharmacodynamics, they can be difficult to apply in the clinical setting. Many factors beyond the dose-response curve of a drug will affect the way that a drug functions in the context of patient therapy.

All drugs cause more than one (1) single and specific effect. Besides the desired therapeutic effects, drugs may also cause unwanted toxic or adverse effects.

Two (2) clinically relevant measures that compare the therapeutic effects and the toxic effects of a drug are:

To understand these measures, it is also necessary to comprehend the concepts of:

There is usually a large amount of variation in the response to a drug, both between patients and within an individual patient over the course of treatment.

Some of this variation is due to pharmacokinetic factors such as absorption, distribution, metabolism, and excretion of the drug from the body. However, there are pharmacodynamic factors that can affect the variation response:

The following information is a snapshot from ANMF’s Understanding Foundational Pharmacodynamics tutorial on the Continuing Professional Education (CPE) website.

The complete tutorial will give you one hour of CPD.

To access the complete course, please go to anmf.cliniciansmatrix.com

NSWNMA, QNMU and ANMF NT members have access to the course for free.

For further information contact the education team at education@anmf.org.au