Two NSW midwives who courageously put the lives of mothers and babies ahead of their own when a severe storm hit the Lismore Base Hospital nearly six years ago have been recognised in this month’s Australian Bravery Decorations.

In 2015, a severe storm that included strong winds, hail and torrential rain lashed the Lismore area.

According to reports, scaffolding on a construction site at the hospital dislodged and collapsed onto a temporary maternity ward building. Ceilings caved in, debris was scattered across the ward and hot water mains burst.

At the time, five mothers and their newborn babies were in the immediate area, along with visitors.

Midwives Leanne Chamberlain and Mary-Ann Hyde were on duty in the ward when the severe storm hit.

Leanne was caring for a mother and her newborn when the ceiling collapsed. She leapt into action, hurling herself across the pair to shield them from the falling debris.

Despite suffering injuries, Leanne’s biggest concern was the safety of the mother and baby, as well as that of the others on the ward.

Her colleague, midwife Mary-Ann Hyde, also responded to the calls of distressed mothers during the freak event.

In the face of falling ceiling panels and surrounded by water, Mary-Ann still managed to wade through the water and slide across a wall to reach the maternity pod. From there, she responded to calls for help, running through the heavily damaged building to offer assistance.

Both Mary-Ann and Leanne made sure women and babies were moved to the safest areas of the ward and continued to provide care and reassurance until emergency services arrived and the site was evacuated.

This week, the courageous and inspiring midwives were one of 111 Australians recognised in the latest Australian Bravery Decorations. The midwives received a Commendation for Brave Conduct. 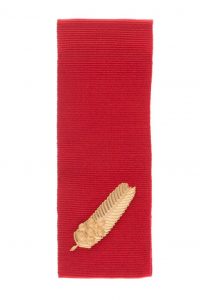 The Insignia of the Commendation for Brave Conduct. Permission to reproduce the above image granted by the Office of the Official Secretary to the Governor-General.

“Both of these midwives went well above and beyond what would normally have been expected of any nurse or midwife in such difficult circumstances,” he said.

“The fact that Leanne immediately threw herself across one mother and baby to shield them from the falling debris is remarkable. Leanne ignored her own injuries and put the safety of her patients first.

“Mary-Ann’s efforts during the crisis were incredible. Surrounded by debris and water, she managed to wade through it and slide across a fallen wall to reach the mothers and babies and support Leanne.”

The NSWNMA and Lismore Base Hospital Branch, with input from local authorities, nominated the midwives for the national bravery awards.

“These awards recognise the courageous actions of individuals who, in a moment of danger or peril, chose to act. They were brave, they did not hesitate and their actions made a difference,” Governor-General of the Commonwealth of Australia, David Hurley said.

“They put their own wellbeing at risk to help others. They were not only brave, they were selfless. The stories of their deeds are remarkable and should inspire all of us.”