The ANMF has developed an international network of affiliations to advance the interests of the professions and improve health outcomes globally. The ANMJ talks with Secretary Jill Iliffe of the Commonwealth Nurses and Midwives Federation (CNMF) of which the ANMF has been a member since 1973.

As Secretary of the CNMF what do you see as the organisation’s key roles and strengths?

The CNMF is a Commonwealth accredited civil society organisation which gives it access to high level Commonwealth forums. It works closely with the Commonwealth Secretariat and the Commonwealth Foundation. This enables the CNMF to represent nursing and midwifery at the Commonwealth level and influence Commonwealth policies on health, particularly the input of nurses and midwives to achieving health objectives such as universal health coverage and the Sustainable Development Goals. 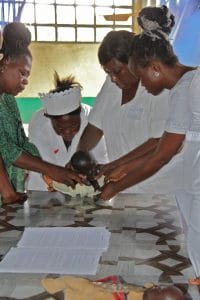 The major strength of the CNMF is its ability to work with member nursing and midwifery organisations on the ground at the country level with capacity building and providing support, guidance, and tools needed to achieve country level goals. The CNMF has a very close network with nursing and midwifery organisations across the 54 Commonwealth countries making it possible to link countries working on similar objectives to share experiences and resources. The CNMF is also able to provide high level information, resources, and opportunities to members they may otherwise not be exposed to. Another major strength is access to funding to conduct specific projects with members in-country. The CNMF has an active Board who work with members at a regional level within the six CNMF regions: Pacific; Atlantic; West Africa; Asia; Europe; and East, Central and Southern Africa.

As a former ANMF (ANF) Federal Secretary what do you see the benefits for the union’s involvement with the CNMF?

The first is the opportunity to network with other nursing and midwifery organisations across the Commonwealth and to become involved in and support their activities; share expertise; and learn from each other.

The second is to influence the direction, priorities and goals of the CNMF. A representative from the ANMF has been on the CNMF Board since 2012 however Australia has never held the Presidency or Deputy Presidency. Another is access to Commonwealth specific forums and project funding opportunities.

During my term as ANF (ANMF) Federal Secretary, the union re-established strong links with the South Pacific Nurses Forum, revising its constitution, establishing its website, and supporting countries hosting the biennial SPNF meeting. We also conducted a major work value study in PNG; supported the establishment of the new East Timor Nurses Association; and re-established links with the ICN in partnership with the (Royal) College of Nursing Australia.

There are great opportunities for the ANMF to influence nursing and midwifery growth and development in Asia. The nursing organisations in most low and middle income countries in Africa, Asia, and the South Pacific do not have strong nursing and midwifery unions. The CNMF has been able to support nursing and midwifery professional associations in a number of countries to become unions. The ANMF is in a unique position to support this work. There is an opportunity to establish short term (three month) internships for officials of associations in other countries to spend time with ANMF branches to gain expertise in industrial representation and campaigns. The ANMF Federal Office, in partnership with the CNMF, could spearhead this initiative with minimal effort and cost.

What are some of the main recent achievements of the CNMF?

For a small organisation, the CNMF has achieved a great deal mainly through working on the ground in-country to accomplish practical and tangible outcomes. One of the main achievements has been to raise the status of the CNMF to that of a professionally credible, and highly influential organisation in Commonwealth circles. The CNMF has had two goals: to improve the quality of nursing and midwifery care in Commonwealth countries and to improve health outcomes for Commonwealth citizens. Project work has included:

What are some of the current priorities for the CNMF?

The CNMF has been funded to conduct a project in the South Pacific on nurses’ health. This project is linked to the high disease burden of non-communicable disease in South Pacific countries. The main focus of the project is recognising the important contribution nurses make to the populations’ health, to gain an insight into whether nurses’ perception of their own health influences their public health messages to their clients.

The CNMF also plans to continue their work on reforming mental health legislation to improve mental health outcomes across the Commonwealth; providing maternal health updates for midwives; and maintaining our input at Commonwealth level on universal health coverage, the SDGs, and non-communicable disease.

What are some of the challenges or changes you see the nursing and midwifery profession has ahead and how does the CNMF or globally the professions need to respond?

Internal and external conflict with the resultant destruction of country health infrastructure and mass migration of people is one of the major challenges. The effects of climate change, particularly on small island states, is another major challenge. Another is the cost and disease burden to countries in the future of non-communicable disease.

Nurses and midwives are such important influencers and contributors to minimising the global impact of these challenges. They need to be informed; they need to be involved; and they need to take action. The CNMF as a small organisation has to use its resources wisely and so has focused on in-country work with our members to achieve practical, visible, and long lasting outcomes.