How breathing correctly can help manage stress, anxiety and panic

Registered Nurse Mary Birch stumbled across breathing retraining in the late 1990s. Before long, she was teaching the program to people and helping them overcome conditions such as anxiety and panic attacks. Now, she has penned a book explaining the links between breathing and these conditions with strategies and techniques people can follow to improving their breathing patterns.

For the past two decades, Melbourne-based RN and Buteyko practitioner Mary Birch has been teaching people with conditions including stress, anxiety and panic attacks to breathe more effectively.

Birch offers a course underpinned by the Buteyko Method of breathing retraining, developed in Russia in the 1950s.

The Buteyko Method comprises a program of breathing exercises and posture, health and lifestyle guidelines to support functional breathing.

It focuses on normalising the rhythm, the rate and pattern of breathing, effective use of the diaphragm, and gentle nose breathing to reduce hyperventilation.

Birch was teaching nursing at university when she read an article in the Medical Journal of Australia about the first clinical trial of the Buteyko Method outside of Russia.

The trial was held in Australia and focused on asthma.

“A family member had asthma so I was interested in learning about it and when I read about the trial I was very impressed by the results so I decided to investigate further,” Birch recalls.

“Then I went along to a course and saw how effective it was. I thought ‘this should be mainstream’.”

The Buteyko Institute of Breathing & Health is the professional body that represents and accredits practitioners delivering breathing retraining courses.

“You have to be able to teach it. We don’t call it a therapy. It’s actually an educational program and it’s taught to people with conditions such as asthma, anxiety, and panic attacks.”

Birch says studies in the US suggest 10-25% of people over-breathe, and that anxiety-related conditions are as prevalent as asthma in Australia but social stigma prevents open discussion.

“It’s a very practical course in breathing retraining. I’m not a psychologist. Most of the people I teach have seen a psychologist already and have had counselling. Most of them have tried medication already.”

Birch was inspired to write her new book, Breathe – The 4-week breathing retraining plan to relieve stress, anxiety and panic, after clients and fellow practitioners suggested people were experiencing benefit. 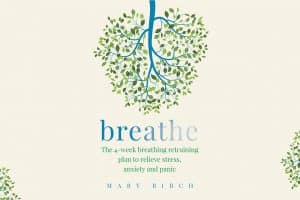 Launched this month in Australia, New Zealand and the UK, the user-friendly book covers how breathing retraining can improve a disordered breathing pattern.

Part one outlines links between disordered breathing and stress, anxiety and panic and how most sufferers unknowingly over-breathe.

At Birch’s practice, equipment monitors people’s breathing patterns before and after courses, and statistics and case studies are provided in the book.

“We measure the end-tidal carbon dioxide levels before and after, amongst other things, but that’s the important one,” Birch says.

The second part of the book runs through a step-by-step 4-week course on awareness and improve the breathing pattern, including breathing exercises, strategies and techniques for healthy breathing, and sleep, lifestyle and diet guidelines.

Birch hopes the book will help dispel the myth that deep breathing, a habit many people develop from childhood, is beneficial.

“Breathing should be appropriate for the activity. Why would we want to deep breathe if we’re just sitting in a chair? It doesn’t make sense. In hospital it may be necessary to encourage some patients to breathe more deeply following surgery or anaesthetics or who are on medications that may affect breathing, but that’s a different scenario.

Breathe – The 4-week breathing retraining plan to relieve stress, anxiety and panic is being released in Australia and New Zealand by Hachette Australia on 8 January and in the UK on 24 January by Little, Brown Book Group.