A delegation of 10 Australian Nursing and Midwifery Federation (ANMF) aged care members watched on in Federal Parliament last night to hear Opposition Leader Anthony Albanese announce in the Budget reply that if elected, the ALP would implement the critical recommendations of the Royal Commission into Aged Care Quality and Safety.

The measures the Opposition said it would implement if elected included: 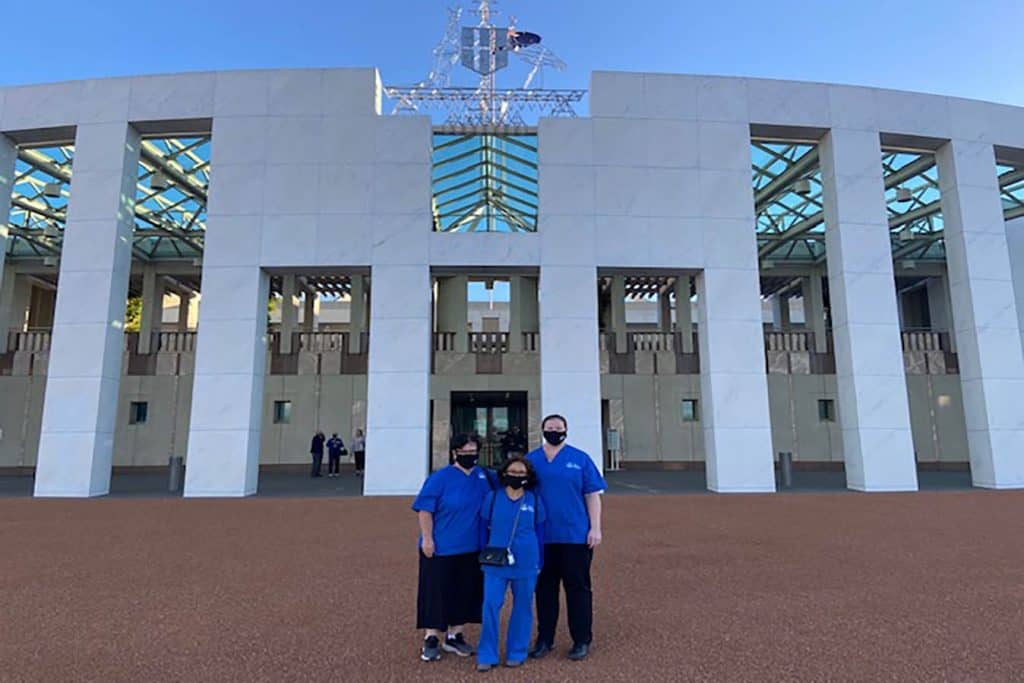 Aged care workers outside Parliament House for the Budget reply

“After years of inaction, we may finally have a plan to fix the core problems underlining the crisis in aged care,” ANMF Federal Secretary, Annie Butler said.

“We have known what the real problems in aged care are for years, but despite dozens of reports, inquiries, investigations and even a Royal Commission all saying the same thing, no one has been prepared to address these core problems. We have just heard promise of a Government that, if elected, might actually take the genuine action needed.

Ms Butler said that the Morrison Government was given a road map for reform more than a year ago by its own Royal Commission but failed to act on the Commission’s critical recommendations.

“Instead of overseeing desperately needed improvements, in the year that has elapsed, the Government has overseen a deepening crisis across the sector.

“Our members have given us heartbreaking accounts of the consequences of the Government’s inaction. These are dedicated aged care workers who have not only suffered the disappointment of seeing anything change in the last year but who have had to cope with the aftermath of the Government’s insistence that the ‘country must open up’ and ‘live with COVID’; and who have had to bear witness to the devastation this strategy has caused in aged care.

“They are completely demoralised. Nurses’ and care-workers’ experiences over the last few months have left them feeling abandoned, helpless and vulnerable – and utterly hopeless. They have felt that no one will ever fix aged care.”

Ms Butler said that nurses and care workers had finally been given a sense of hope.

“That a Labor Government might finally treat them, and the older Australians in their care, with the dignity and respect they deserve. I hope that, with enough time to care, nurses and care workers, who love their job but have become so stressed and worn-out because of staff shortages, can go home after their shift, feeling proud and satisfied with what they’ve done for every older Australian.”