Alcohol use harming Australians and costing the community billions each year

Alcohol consumption has been estimated to cost Australia almost $67 billion a year in health, workplace and other impacts, including significant personal and community level harms, according to new research released today by Curtin University’s National Drug Research Institute (NDRI).

The study, Examining the Social and Economic Costs of Alcohol Use in Australia: 2017/18, is the first national update in a decade of the costs of alcohol use.

Using up-to-date methods of calculating costs and including a number of previously uncounted conditions and costs, the dollar figure it is far higher than the 2010 estimate of $14.4 billion.

Researchers made a conservative estimate in their calculation of costs, with further harms where a reliable cost could not be estimated excluded. 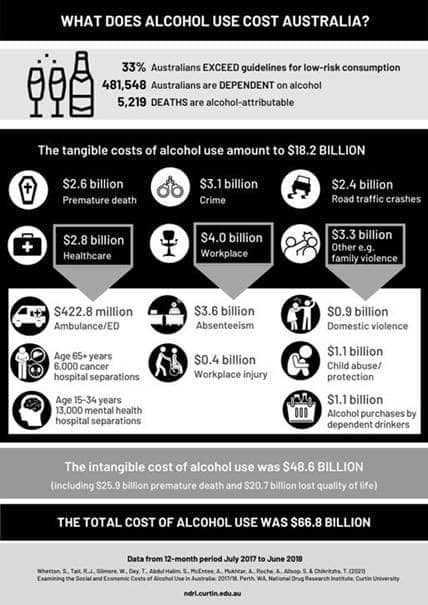 There were several other critical areas where, due to limited data, reliable cost estimates were difficult to determine, including lost quality of life from living with someone with alcohol dependence; and, reduced workplace productivity (‘presenteeism’).

“These offset some of the health gains we might expect from overall declining use of alcohol in Australia,” Professor Chikritzhs said.

“In addition, some of the harms, such as cancers, can take time to appear, so we are seeing the impacts of alcohol from years and perhaps decades of use.”

NDRI Professor Steve Allsop said while the amount of alcohol consumed had declined substantially from a peak in the mid-1970s, particularly in younger adults, the research showed the need for continued investment in public health strategies to reduce harms from alcohol, not just for those who drink but for those affected by the drinking of others.

“Alcohol continues to cause a significant toll through premature deaths, with 5,219 cases attributed to alcohol in 2017/18, personal suffering, reduced quality of life, and real financial costs in Australia,” Professor Allsop said.

“Nearly half-a-million Australians are dependent on alcohol, with many more drinking in a way that puts their health at risk. Importantly, any member of the community can be impacted by the drinking of others. The many adverse health effects and other consequences result in significant costs to society. Effective strategies to address alcohol related harms have the potential to substantially reduce medical costs, improve productivity, diminish crime, and lower costs to the whole community while improving community and individual wellbeing.”